Is there a single incident in history of Hindus engaging in terrorism? asked the PM 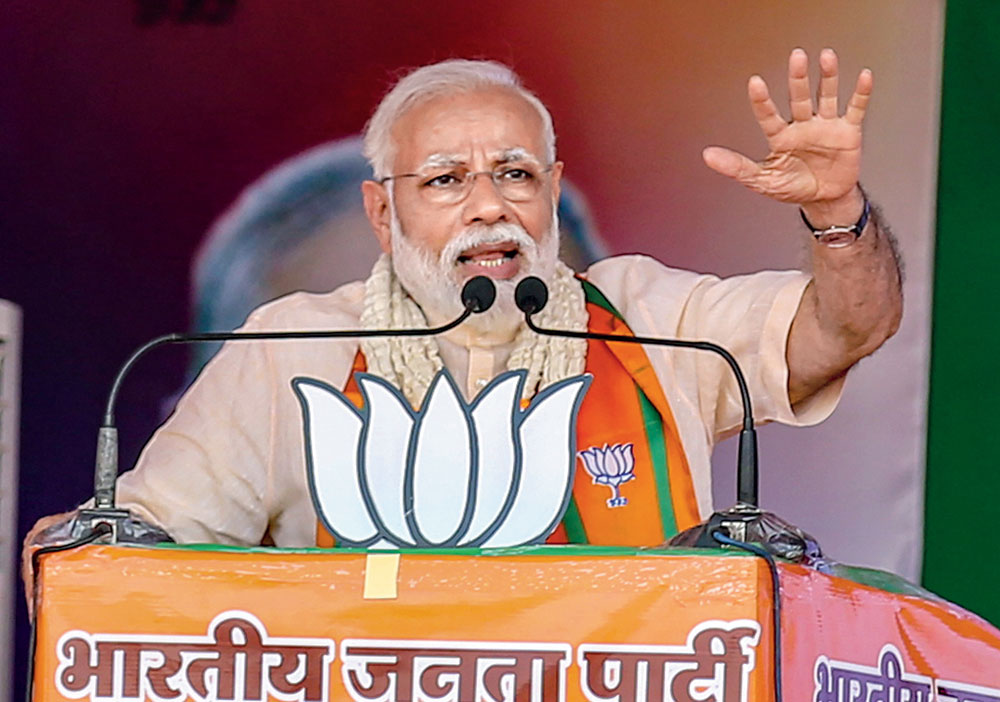 The Samjhauta Express verdict is a matter of shame

Prime Minister Narendra Modi on Monday accused the Congress of committing a “bahut bada paap” (grievous sin) by linking Hindus with terrorism and mocked Rahul Gandhi for “taking shelter in a constituency where the majority (Hindu community) is in the minority”.

At a rally in Wardha, Maharashtra, Modi used the expressions “Hindu” and “Hindu terror” — a term some Congress leaders were accused of using in connection with the 2007 Samjhauta Express bombings, which killed mostly Pakistanis — 13 times (“Hindu” eight times and “Hindu terror” five times).

The Prime Minister referred to the recent court verdict acquitting all the accused, saying it had exposed the Congress’s conspiracy to tarnish “peace-loving Hindus”. The court had, however, regretted the “gaping holes” in the probe by a central agency and voiced anguish that a “dastardly act” had gone unpunished.

Modi linked the matter to Rahul’s decision to contest from Wayanad in Kerala (in addition to Amethi in Uttar Pradesh), although he named neither the southern seat nor the candidate.

Hindus have “woken up”, he said, alleging the Congress was aware of this and its leader was therefore “running away from the arena”.

“The Congress tried to tarnish crores of people of the country by using the term ‘Hindu terror’. Tell me, weren’t you deeply hurt when you heard the expression ‘Hindu terror’? Is there a single incident in history of Hindus engaging in terrorism?” the Prime Minister asked.

“And so, now they (the Congress) haven’t the courage to contest from a constituency where the majority dominates. This is the punishment for using ‘Hindu terror’. They are now compelled to take shelter in a place where the majority is in the minority.” Hindus make up 49 per cent of the population in Wayanad.

The Congress appealed to the Election Commission to act on its own against the Prime Minister’s “divisive” comments and sought an apology from him for his “unforgivable and intolerable misdeed”.

The BJP seems to believe that the Samjhauta blast case has given it a “Hindu terror” angle to add to the “national security” plank and paint the Congress as “anti-Hindu” apart from “pro-Pakistan”.

Modi raised the anti-terror air strikes in Balakot, Pakistan, on Monday too, alluding to some Congress leaders’ questioning of the high but unofficial casualty figures and the wisdom of using missiles to fight terrorism.

“Will you choose heroes of Hindustan or those who have become heroes in Pakistan?” he asked the rally. “Will you teach a lesson to those who have insulted the bravery of our army?”

BJP seniors led by party president Amit Shah had voiced charges similar to the Prime Minister’s on Sunday when the Congress announced Rahul’s candidature from Wayanad.

“In Kerala there is politics of appeasement and so he is going there. You (Rahul) have played with the security of the country for your vote-bank politics,” Shah had said.