Politically, as well as ideologically, the north-eastern states hold tremendous significance for the BJP 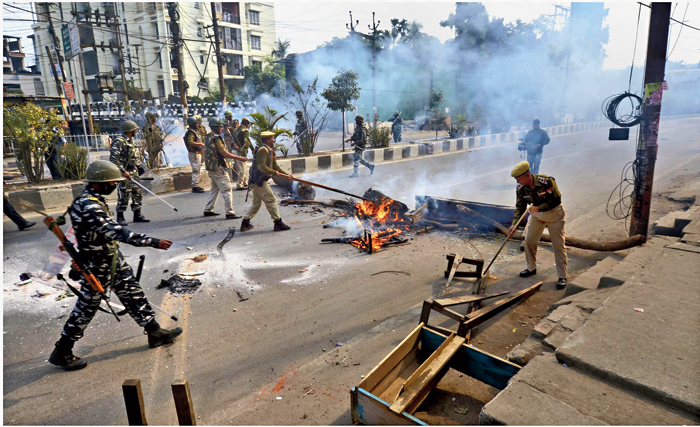 The BJP, led by Prime Minister Narendra Modi, on Thursday accused the Congress of fomenting trouble in the Northeast over the Citizenship (Amendment) Bill, even as ruling party managers tried to assess the political damage if the protests continued to rage.

Although the BJP managers in Delhi hoped the protests would die down in a couple of days, they remained on tenterhooks in the face of reports of the spontaneous outrage among the people, including large sections of Hindus, spreading across Assam. Politically, as well as ideologically, the north-eastern states hold tremendous significance for the BJP.

“We are hopeful the situation in Assam will come under control in a couple of days. There are reports of spontaneous violent protests but we have launched an all-out effort to assure the people of Assam that they will be protected from the CAB,” a BJP leader said.

This leader banked on Modi’s popularity to ease the situation and said an appeal from him would have an impact.

While the protests intensified, Modi and other BJP leaders targeted the Congress, accusing the party of inciting the people by misleading them over the citizenship bill.

Modi sought to assuage the agitated people through an appeal and an assurance to protect the “unique identity and beautiful culture” of Assam.

“I want to assure my brothers and sisters of Assam that they have nothing to worry after the passing of #CAB. I want to assure them — no one can take away your rights, unique identity and beautiful culture. It will continue to flourish,” he tweeted.

The Congress and many other Twitter users promptly reminded the Prime Minister that the people of Assam would not be able to read his message as Internet had been suspended in the state.

At an election rally in Jharkhand, the Prime Minister made similar comments, accusing the “Congress and its friends” of trying to light fires in Assam and appealing to his “brothers and sisters” in the north-eastern state to trust him.

“I take this opportunity to assures the crores of people of the Northeast, including Assam, that we will not only ensure protection of their political heritage, cultural and linguistic identity, but will also work as per the letter and spirit of Clause 6 of the Assam Accord, which has a provision for setting up a committee to work for the safeguard of cultural, social and linguistic identity, besides the heritage, of Assam,” Modi said.

He appealed to the people of Assam and other parts of the Northeast to not get carried away by the “attempts of the Congress to mislead them”.

Those who are already Indian citizens, whether they are Hindu, Muslim, Christian, Buddhist or Jain, have “nothing to do” with the bill, Modi said.

Modi’s accusation found echo in the Lok Sabha as parliamentary affairs minister Pralhad Joshi pointed fingers at the Congress, triggering a walkout by the party.

The Congress’s Adhir Chowdhury had raised the issue during Zero Hour and accused the government of pushing through the “unconstitutional” CAB in a hurry that had angered the people of the Northeast.

Internally, the BJP managers remained firm and ruled out any question of backtracking, saying they were confidant the protests would peter out soon. “Apart from the Congress, some sections of our party too are trying to foment trouble for political reasons. We have identified them and soon they will be dealt with a firm hand,” a BJP leader said.

The information and broadcasting ministry issued an advisory asking TV channels to exercise caution and ensure that nothing that incites violence is telecast.