Let’s stand up to regime that knows no rules: Sonia 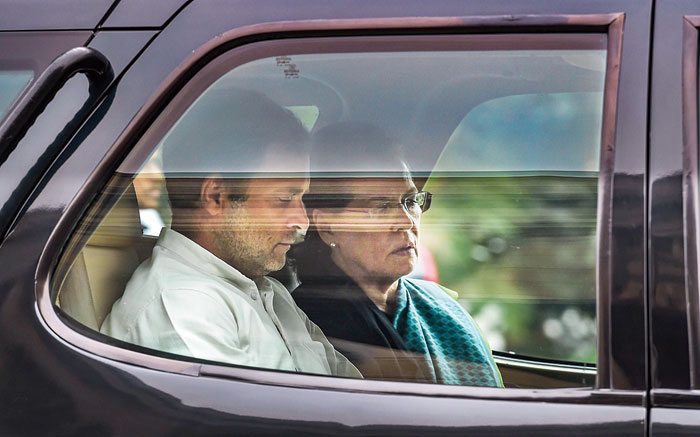 Congress president Sonia Gandhi on Thursday re-christened the incumbent regime as the “Modi-Shah government”, forcefully articulating the Opposition’s concern about the duopoly, not the BJP, overpowering the system.

Addressing Congress MPs in Parliament, a customary meeting in every session, Sonia repeatedly used the term “Modi-Shah government” and accused it of subverting democracy, mismanaging the economy, selling PSUs to corporate cronies and fudging statistics.

Governments have traditionally been recognised through the political persona of the supreme leaders — be it the Churchill government in Britain or the Nixon or Roosevelt White House in the US.

In India, there has been the Nehru government or the Vajpayee government, among others, not Nehru-Patel government or Vajpayee-Advani government. A government being defined in terms of dual control is exceptional.

But Sonia was persistent, appearing to consciously rub in the message that the current power structure was above party systems and parliamentary democracy.

She said: “Friends, let us be united in our resolve to stand up to the Modi-Shah regime, a regime that knows or follows no rules and conventions, intoxicated by power, and wielding it to strike at every institution of our democracy, at political opponents, like our colleagues (D.K.) Shivakumar and (P.) Chidambaram. It is sheer vindictiveness that has kept Chidambaram in prison for 100 days.”

Sonia said: “These are undoubtedly extraordinary times when our fortitude and resilience are under the greatest of tests. But collectively we will turn the tide, not for our sake but for the sake of the Constitution, for the sake of a liberal and pluralistic democracy and for the sake of our country and our people.”

“The public sector has been put on the block, in all probability, to be sold off to a few favoured business people. Lakhs upon lakhs of salaried and ordinary families are worried about their deposits in banks.”

While the dominance of Prime Minister Narendra Modi and home minister Amit Shah is part of the public discourse in the country, the primary Opposition leader underlining the duopoly has a different connotation. It means the Opposition thinks the Union cabinet is irrelevant and that Shah is as important as the Prime Minister, whose supremacy should not have been in doubt after returning with a bigger mandate.

Asked if Sonia was deliberately trying to undermine the Prime Minister’s authority by equating him with Shah who has been in the central government for barely six months, a senior Congress leader said: “Is it wrong to acknowledge Shah’s dominance in this government? The Prime Minister is visible in action only when he is doing shows abroad. Shah is the face of the government in India, be it in the radical decision on Kashmir or the articulation on the NRC (National Register of Citizens). We have always maintained that no other minister matters; the cabinet is just a rubber stamp.”

Sonia made it clear the Maharashtra experiment has her whole-hearted support, saying: “We are meeting this morning in the backdrop of what can only be described as a shameless attempt to subvert democracy in Maharashtra. You are all aware of the sequence of events. The governor behaved in an unprecedented and most reprehensible manner. There is no doubt that he acted under the instructions of the Prime Minister and the home minister.”

She added: “The BJP’s pre-poll alliance did not hold because of its own arrogance and over-confidence. Every effort was made to blatantly sabotage the three-party alliance government formation, but we appealed to the Supreme Court, and the Modi-Shah government was totally exposed. Let me assure you, we three parties (the Congress, Shiv Sena and the NCP) are united in our resolve to defeat the BJP’s sordid manipulations.”

The Congress president said the proposed amendments to the citizenship law strike at the very foundations of the Constitution.

“It is sheer hypocrisy on the part of the Modi-Shah establishment to celebrate November 26 as Constitution Day while deceitfully subverting this sacred document day in and day out,” Sonia said.

On Kashmir, she said: “Three months ago, democracy was again subverted when Article 370 was erased under the blatantly false promise of a new beginning in Jammu, Kashmir and Ladakh. But the ground realities are completely different from the fictitious images conjured up by the Modi-Shah government.

“The agony, anguish and humiliation of the people continue. Former chief ministers — who in the past were political allies of the BJP — MLAs, political workers, ordinary people who believed in the idea of India, who abided by the Constitution of India, have been under house arrest for months. Even children are not being spared in the crackdown.”