Modi in Varanasi for thanksgiving visit 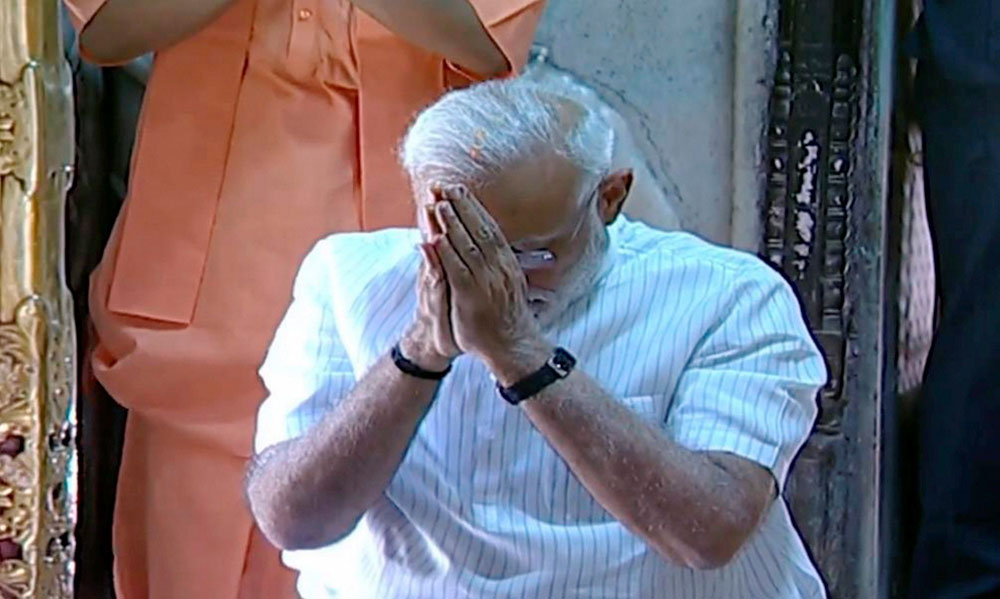 Prime Minister Narendra Modi visited his parliamentary constituency and offered prayers at the Kashi Vishwanath temple on Monday, four days after he steered the BJP to power in New Delhi with a resounding victory of 303 seats in the Lok Sabha.

He was received at the airport by Uttar Pradesh chief minister Yogi Adityanath and governor Ram Naik.

Flanked by BJP president Amit Shah and Adityanath, Modi entered the temple dedicated to Shiva and paid obeisance to the deity as priests recited Sanskrit shlokas in the sanctum sanctorum and blew conch shells.

The thanksgiving visit to the temple town is his first since he won the Varanasi Lok Sabha seat with a huge margin of 4.79 lakh votes, nearly 1 lakh votes more since 2014.

The visit is aimed at thanking people for again reposing their faith in him and offering prayers at the famous temple.

After landing at the Lal Bahadur Shastri International airport, he flew by helicopter to the police lines from where he travelled by road to Bansphatak near the temple.

It was a road show of sorts as his cavalcade traversed through the bylanes of the city amid high security with crowds lining the roads and people on rooftops hoping to catch a glimpse of the man who will be sworn as Prime Minister for a second term this week.

Many people threw rose petals and flowers at the cavalcade. Adding to the carnival-like atmosphere were some artists who put up impromptu performances.

He is also scheduled to address a gathering of BJP workers in the city, party sources said.

On Saturday, Modi tweeted, “Will be going to Gujarat tomorrow evening to seek blessings of my mother. Day after tomorrow, I will be in Kashi to thank people of this great land for reposing their faith in me.”

In a video message ahead of the May 19 polling, Modi called himself a “Kashivasi” and termed the city his guiding spirit.

He said it was a matter of great satisfaction for him that he was in service of the city whose presiding deity is Shiva.