Modi’s last resort in the 2019 elections: Credit for air strikes carried out by armed forces 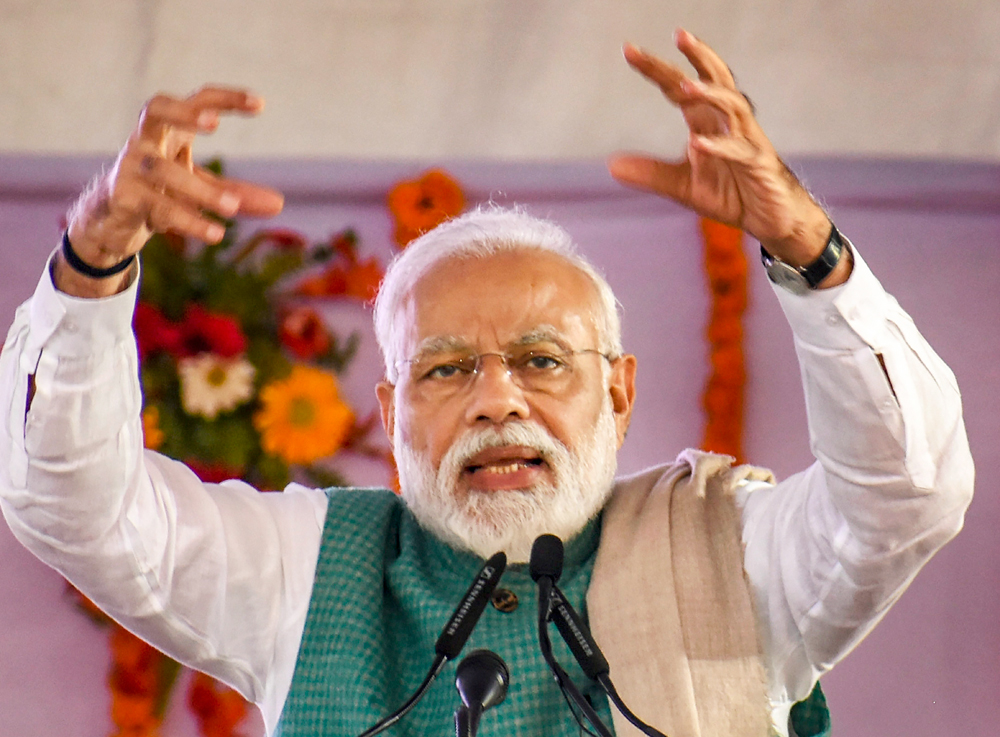 The Congress on Sunday asked Prime Minister Narendra Modi to clarify his what-if-we-had-the-Rafale comment on the air strikes and accused the government of “surrendering national interest” by attending an OIC meeting, jettisoning the self-imposed restraint it has observed since the Pulwama attack.

The party highlighted Modi’s comment that “had we had the Rafale (jets), the results (of the recent air strikes on Pakistani terror camps) would have been different”, insisting that it was not demanding proof of the operation’s success but only a clarification of the remark.

It also cited Union minister S.S. Ahluwalia’s claim that the air strikes neither caused much damage or human casualties nor were meant to, being intended only to demonstrate Indian capability to strike within Pakistan.

Congress sources said it was the government’s own blunders that had led the party to shed its reticence. Apart from Modi’s Rafale comment, they cited the government’s decision to accept the invite from the Organisation of Islamic Cooperation, which on Saturday adopted resolutions on Kashmir that referred to “Indian terrorism’’ and “Indian barbarities”.

Sources said that Congress president Rahul Gandhi had earlier proscribed counter-offensives against the government till passions cooled, seeing little point in duelling over emotive subjects like terror, Pakistan and the army, keeping in mind the public mood.

Party seniors were livid when Modi painted the Opposition as Pakistan sympathisers by saying “Modi-hatred has turned into India-hatred”, but Rahul advised restraint.

The situation changed on Saturday night when Modi, battered by allegations of corruption in the Rafale deal, sought to turn the tables by suggesting the fighter jets would have been an asset during the air strikes.

“Today, the lack of Rafale is being felt. The country is saying in one voice that had we had the Rafale now, the results would have been different,” he said.

Rahul led the attack, asking Modi on Saturday night itself over Twitter whether he had “no shame at all”.

A statement from Congress communications chief Randeep Surjewala said: “Tragically, the Prime Minister has blatantly politicised the bravery and martyrdom of India’s soldiers. Having failed on every front, shameless credit-seeking for the valour of the armed forces is Modi’s last resort in the 2019 elections.”

On Sunday, party spokesperson Manish Tewari scaled up the attack, referring to the OIC’s Kashmir resolutions and the comments by Modi and Ahluwalia.

Tewari cited Modi’s comment on the Rafale jets to say: “It was the Prime Minister who raised questions about the desired outcome of the air strike. He said things would have been different had Rafale been here. What does he mean?”

Tewari added: “If the reports are correct that one of the MiG-21s actually shot down an F-16, then what are the different expectations that the Prime Minister is talking about?

“Then you have a minister in the Union government, S.S. Ahluwalia, a close confidant of the Prime Minister, who said the air strike was meant to warn, not kill. If what he said is untrue, he should be sacked from the ministry. The Prime Minister needs to clarify.”

On Modi’s claim in Patna on Sunday that the “chowkidar (watchman) was alert”, Tewari said: “If the chowkidar was alert, how did such major terror attacks happen in Gurdaspur, Uri, the Pathankot air force base and Pulwama?”

On the OIC meeting, Tewari said: “They (the government) surrendered India’s national interest by legitimising the OIC by attending their function. This is a sell-out.”

“The OIC passed a resolution which condemned the recent wave of ‘Indian terrorism’ in ‘occupied’ Jammu and Kashmir…. Is this what we achieved -– the tag of Indian terrorism? Are we an occupation force in Kashmir? Isn’t this an abject surrender of our national interests?”

“We would like to ask the Prime Minister: Is this your diplomatic achievement that you got India labelled a terrorist state?” Tewari said.

“There’s a reason why India had ignored these meetings of the OIC over the past so many decades. What did you get in return --- a resolution calling India a terrorist state, a resolution that appeals to other member states and Islamic institutions to provide humanitarian aid to the Kashmiri people?”

He went on: “Are we not capable of looking after our people? And this humanitarian assistance is a euphemism for what? Support for terror activities in Jammu and Kashmir.”