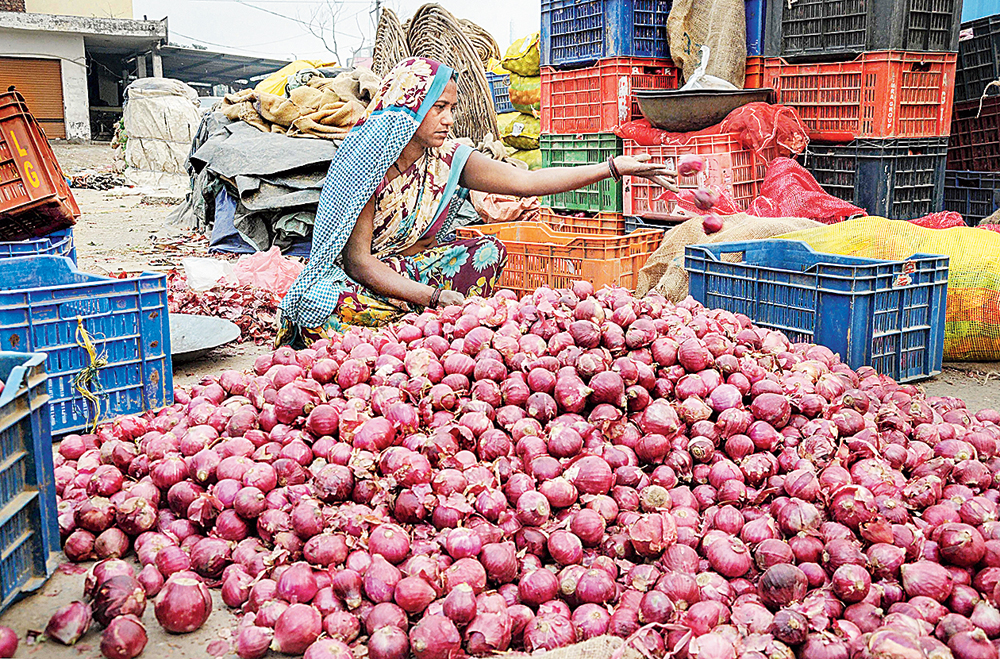 Rising onion, garlic and ginger prices have prompted most primary schools in rural Odisha to replace the egg curry in their midday meals with boiled eggs, which the children are forced to eat with rice soaked with water.

In the towns, some of the schools are still serving egg curry, but they are cooking it without onions or ginger, rendering it tasteless.

“With the prices of onions, ginger and garlic rising, it’s no longer possible to prepare the egg curry. We are serving rice and boiled eggs to the children,” the headmaster of a primary school in Cuttack district said.

“We are finding it hard to even cook the soyabadi (soy ball) curry without onions and these other ingredients.”

Onions, which are not just rich in minerals and vitamin C but add significantly to the taste of a curry, now cost Rs 65-70 at the daily markets. A fortnight ago, they sold at Rs 35-40 a kilo. Ginger prices have touched Rs 160 a kilo and garlic is selling at about Rs 200.

Nearly 5.87 lakh pupils of primary and upper primary classes (I to VIII) are covered under the midday meal scheme in Odisha. They are meant to be served rice and dalma (dal and mixed vegetables) on Mondays sand Thursdays, rice and soyabadi curry on Tuesdays and Fridays, and egg curry on Wednesdays and Saturdays.

A headmaster in Maurbhanj district said it was becoming hard to even afford the boiled egg.

“A primary school’s budget is Rs 4.93 per midday meal but an egg costs Rs 5 to Rs 5.50. We have been forced to compromise on the quality of even the vegetarian meals because of the prices of vegetables,” he said.

He said that when the school sometimes serves egg curry cooked without onion, the children refuse the tasteless gravy and eat only the egg with rice and water.

School and mass education minister Samir Ranjan Dash told The Telegraph the government was “aware of the issue”.

“Almost all the schools in the state have banished the onion from their midday meal kitchen. The Centre should step in. Until the onion prices drop, we can’t ask the schools to cook the egg curry or the soyabadi curry with onions,” he said.

Onion traders said the price was directly proportional to the gap between demand and supply.

“Odisha needs 3.67 lakh tonnes of onion a year but we produce only 1.5 lakh tonnes,” an official said.

“So we have to depend on Nashik (Maharashtra), Rajahmundry (Andhra Pradesh) and Bangalore to make up the shortfall. The floods in Maharashtra that have damaged crops have severely hit Odisha’s markets.”

He added: “Onion prices are likely to rise by another Rs 6 to Rs 10. If required, we’ll intervene in the market.”

Sources said the state government had written to all the district collectors on Wednesday evening asking them to have onions sold at cost price from government outlets.

Homemakers are reeling. “At Rs 65 a kilo, the onion has climbed out of our reach. The government should provide onions through ration shops,” said Malati Das, 52, a slum dweller.

Middle-class families have pruned their non-vegetarian fare. “We used to eat fish, eggs and chicken once a week each, but have dropped fish and chicken from our menu,” said Uma Patnaik, who owns stalls that sell egg rolls, chicken fingers and biryani near the airport. “Without onions, garlic or ginger, you can’t make non-vegetarian dishes tasty,” she added.