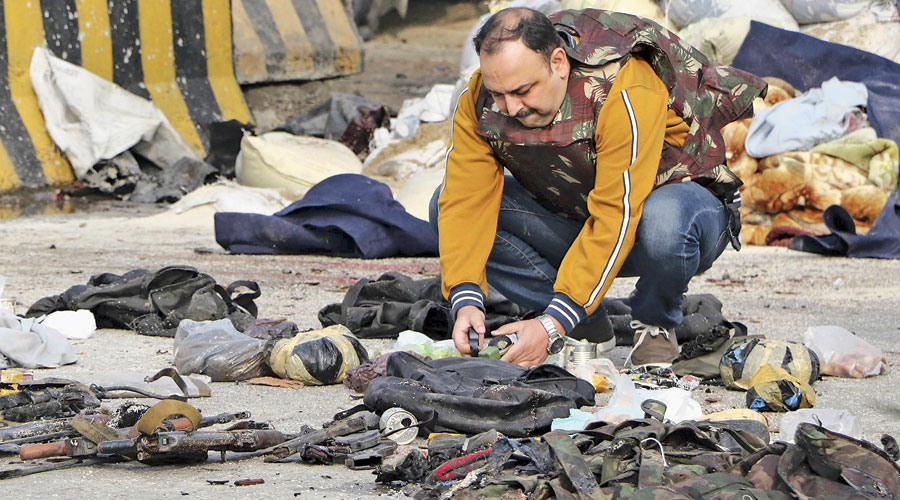 The encounter threw up a sizeable arms haul, hitting the Pakistan-based militant leadership’s attempts to offset an increasing shortage of weapons in the Valley.

The forces recovered 11 AK-47 rifles, 29 grenades, three pistols and a huge cache of ammunition, prompting Jammu inspector-general of police Mukesh Singh to claim the largest arms seizure in the Jammu region in years.

Singh said the gunfight had begun after the police intercepted a truck at Nagrota on the Jammu-Srinagar highway at 5am. The operation lasted three hours, during which traffic was suspended on the highway.

While the truck was being searched, Singh said, “the hiding militants” had unleashed “heavy” fire. “Two policemen suffered injuries but both are stable,” he said.

The CRPF and the army joined the encounter midway. A hunt is on for the truck driver, who fled before the firing began.

Police sources said the militant leadership in Pakistan had been making concerted attempts this year to send arms to rebels in the Valley.

A beefier border vigil and an increased reliance on technology to prevent infiltration have forced Pakistan to use drones to airdrop weapons, they said.

Many among the dozens of militants killed this year carried only pistols. The weapons shortage, sources said, was hobbling militant recruitments.

Singh told reporter: “There had been general intelligence inputs about fresh infiltration bids by the Jaish-e-Mohammad and the Lashkar-e-Toiba. We were on the alert.”

He said intelligence reports had warned about militant plans to disrupt the District Development Council elections, which begin on November 28.

Singh said the large weapons haul indicated the militants were planning something big. “Their plan stands foiled,” he said.

Police sources said the militants appeared to have infiltrated into Jammu from PoK sometime on Wednesday night or early Thursday morning.

In January, three militants had been killed near the same spot and they too had been heading towards the Valley.

Stoning around encounter sites has been increasing in the Valley, fuelled by anger at the constitutional downgrade of Jammu and Kashmir last year, the clampdown that accompanied it and subsequent government decisions.

Valley protesters had in the past too used stones to disrupt security operations and help militants escape, but the trend had largely been checked during past year or two.

On Thursday, the forces used tear gas and fired in the air to disperse the protesters. The operation was continuing in the evening despite the suspected escape by two militants.