The three-decade-old militancy in Kashmir began outside the Srinagar residence of then Valley police chief Ali Mohammad Watali when a group of militants launched an attack with AK-47 rifles in the autumn of 1988. 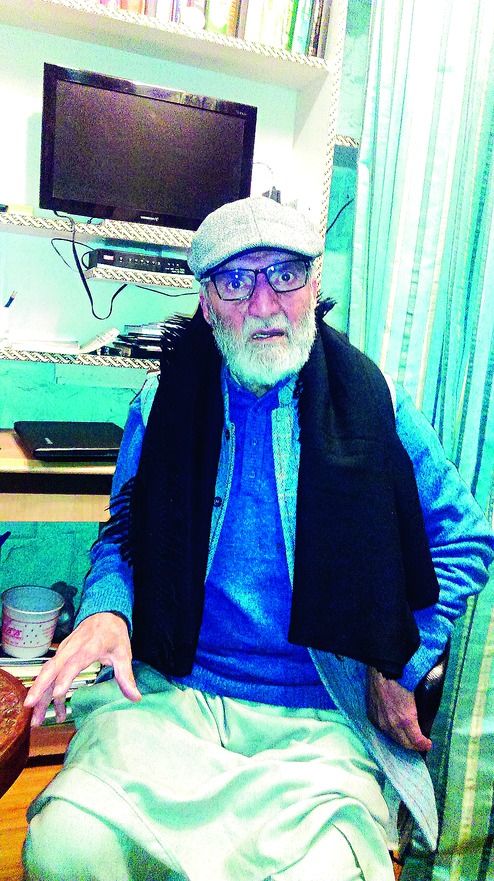 Srinagar: The three-decade-old militancy in Kashmir began outside the Srinagar residence of then Valley police chief Ali Mohammad Watali when a group of militants launched an attack with AK-47 rifles in the autumn of 1988.

Watali survived but Kashmir's new chapter of azadi (freedom) struggle got its first martyr - Aijaz Dar, a militant who was among the first batch of youths who went across the Line of Control to receive arms training in Pakistan. Aijaz died in an exchange of fire with policemen guarding Watali's residence.

Watali, the target of the first assassination attempt by militants in the Valley, has returned to the spotlight after a long hibernation, this time as an author.

In Kashmir Intifada (Kashmir Uprising), he has penned Kashmir's long struggle, beginning with the Sheikh Mohammad Abdullah-led movement against the autocratic Dogra rule, his decision to side with India during partition and the purported support he still enjoyed in the Valley despite such a tilt and the rise of separatism that took a dangerous turn with the beginning of militancy.

"Nobody believed back then that it were Kashmiri youths who had gone across (the border), received arms training there and started militancy here. So much so that even Geelani sahib told me that the Government of India might be doing it to destabilise the government of Farooq Abdullah," Watali, 85, told The Telegraph.

It is widely believed that neither he nor his Jamat-e-Islami played a role in starting militancy, but the first men to pick up arms under the banner of the Jammu and Kashmir Liberation Front were youths like Aijaz.

These youths had only months before in the 1987 Assembly elections campaigned for the Muslim United Front (MUF), a loose coalition of religious and social groups of which the Jamat was a part, challenging the National Conference-Congress alliance.

When militancy received massive public support, the Jamat dabbled with it and created the Hizbul Mujahideen.

The elections were rigged. Militants including Hizb chief Syed Salahuddin, who contested from Amira Kadal, have in the past claimed Watali played a role in the rigging, perhaps the reason he was attacked. Watali has fiercely contested the charge in his book.

"That election was rigged by the Congress through its loyal IPS and IAS officers, and Farooq Abdullah was not involved. To the contrary, I prevented rigging at several places. I remember everything was going on smoothly in Amira Kadal (at the Srinagar city centre) up to 4pm that day. But after that, bogus votes were polled and there was stone throwing (by Salahuddin's supporters). Those stone throwers were the first to pick up the gun," he said.

MUF leaders had then claimed they were winning a majority. The rigging was followed by a crackdown in which many leaders and sympathisers of the MUF were jailed. A number of them picked up guns later.

Watali writes that the rigged election may have been a trigger for militancy, but the seeds of separatism were sown long before in 1953, when Sheikh Abdullah was dethroned as the Prime Minister of the state and jailed.

"Sheikh sahab's arrest was a Himalayan blunder committed by the Government of India. While he was in jail, Baig Sahab (Sheikh's deputy Afzal Baig) launched the Plebiscite Front and youths were attracted to the slogan," he wrote.

The former police officer said Kashmiri youths started craving for guns decades before but the weapons were not available to them until the late 80s, when dozens of youths quietly went to Pakistan to get bombs and rifles. Some bombs went off in Srinagar in 1988 but perhaps most people, including those in the administration, did not take them seriously.

The attack on Watali on the night of September 17, 1988, showed that dozens of youths had already trained in camps across.

"I woke up to a rapid gun fire reports, coming from main gate of my Raj Bagh house at Srinagar. Instantaneously, I realized that I and my family were under attack by the armed militants," he wrote in the book.

Watali claimed militancy was started by Pakistan after taking two former ministers into confidence, but he has not named them in the book. It is widely believed that one of them is the father of an incumbent minister in the Mehbooba Mufti government.

The police went all-out against militants after the attack, forcing a number of them to take shelter in Pakistan-occupied Kashmir. They returned in 1989 and attacks on security forces and pro-government men soon picked up.

Watali believes militancy was still a low-key affair in 1989 with only a 100-odd youths wielding guns, but the decision of the Farooq Abdullah government, on the Centre's prodding, to use the "military option" changed everything. The CRPF was deployed and civilian casualties began to mount, angering more and more people.

"I strongly protested the government's decision to use the military option because I knew it would worsen the situation and that is what happened. I decided to proceed on Haj pilgrimage," he said.

Watali was shifted to the public service commission soon after. He went into a shell after his retirement in the early 90s. His son Shafqat Watali later joined the police and is serving as the inspector-general.

Watali's younger son Zahoor Watali went in the opposite direction and allegedly hobnobbed with militants. He was arrested by the NIA this year for alleged terror funding.

Watali believes Kashmir will have no peace unless the "political issue with Pakistan is resolved" and has among other things proposed dual citizenship (Indian and Pakistani) for Kashmiris as a way forward.