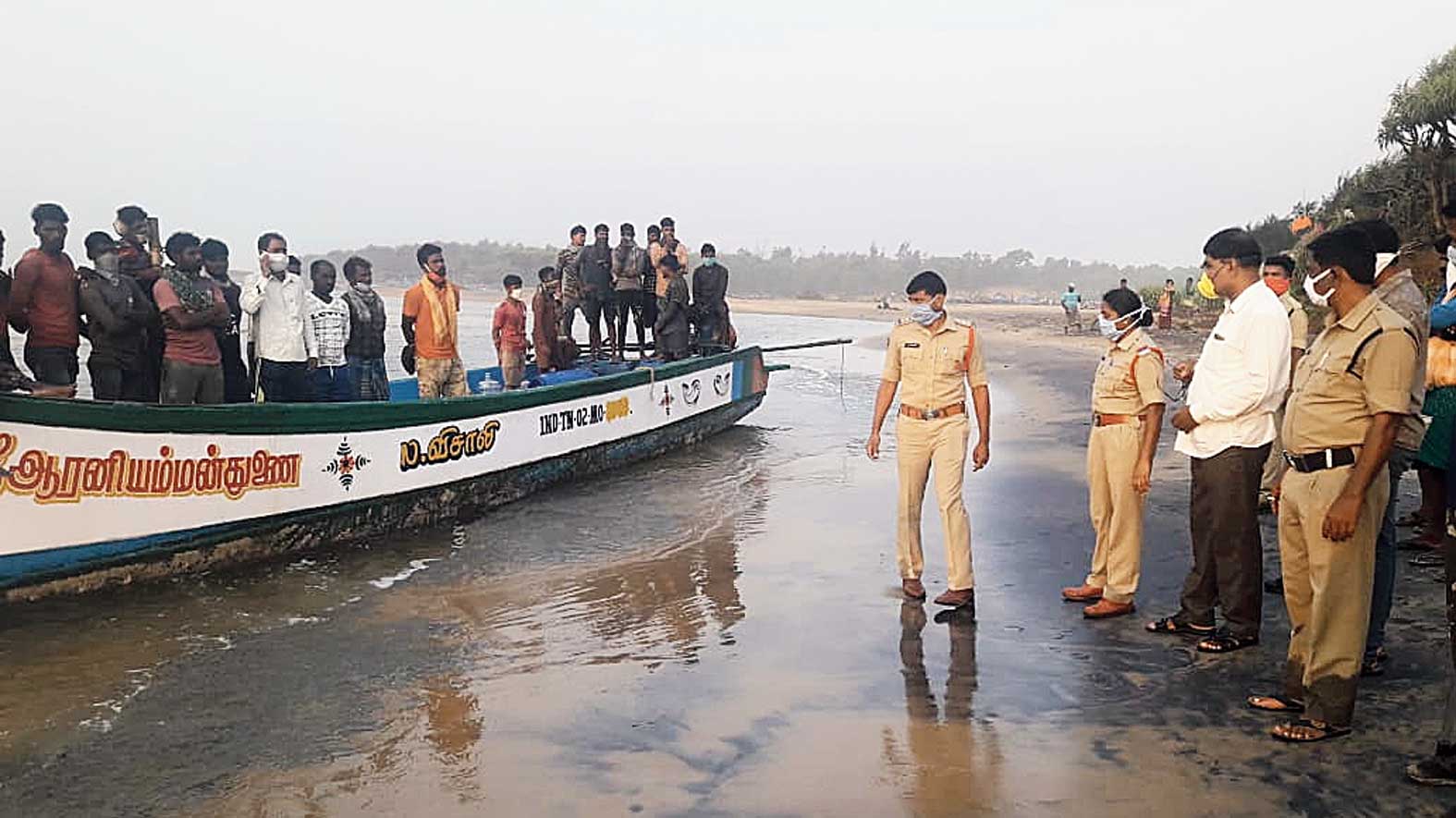 Police take the migrants to the quarantine centre after they reach the Dankuru beach near Ichhapuram in Andhra Pradesh on Monday morning.
Picture by Gopal Krishna Reddy
Subhashish Mohanty   |   Bhubaneswar   |   Published 22.04.20, 09:23 PM

Locked down on land, they chose nights in the open sea.

A band of migrant workers from Odisha and Andhra Pradesh undertook a daring sea journey from Chennai in a bid to reach home, covering 1,080km in a boat they had bought after being stranded in the southern city for over a month.

The 27 — all fishermen who worked for a fish merchant — eventually fell short of their destination but not before they had reached shore in Ichhapuram on the Odisha-Andhra border on April 20, five days after setting off from Chennai.

They waded ashore to the beach, where waiting policemen took them into quarantine.

Vijay Amruta Kulange, collector of Ganjam district in Odisha, confirmed the journey by sea. “All the 27 fishermen who were coming from Chennai in a wooden boat reached Dankuru beach near Ichhapuram of Andhra Pradesh on the Odisha and Andhra border early on Monday morning,” Kulange told The Telegraph.

Ten of the migrants are from Odisha, the rest from Andhra.

So what prompted the adventure on the waves?

Rising coronavirus cases in Chennai, said Krushna Behera, one of the migrants in the group from Odisha.

“As the number of coronavirus cases increased in Chennai, we got scared. We wanted to return home but there was no transport available. We talked among ourselves and finally decided to try our luck by sea, as one of our friends suggested,” the 38-year-old fisherman said from his quarantine centre.

Over 1,500 cases have been reported in Tamil Nadu.

Another objective was to avoid detection by police — always a possibility on roads and highways.

“Each of us contributed Rs 7,000 and we purchased a boat with a 9HP engine at a cost of Rs 1.73 lakh. It was a three-year-old vessel. We confided in the owner of the boat and he handed it over to us with all the equipment.”

The migrants had been looking for a way back home since the middle of March when the nationwide lockdown had not started yet. But a fishing ban had been announced on March 15 to check the spread of the virus through contact on the high seas.

“Our resources were depleting. We were in deep trouble,” said Krushna, who has a three-year-old son.

The proverbial last straw was the announcement that the lockdown would be extended for another 19 days from April 15. They decided to act immediately. “We decided to start on April 15. We spoke to each other over phone and bought the boat the same evening. We reached the shore where the boat was anchored at 9pm. To avoid being caught by the police, each of us came separately. We loaded two sacks full of rice, a few kilos of tomatoes, a new gas cylinder, 350 litres of diesel and around 300 litres of drinking water and set sail exactly at 10pm,” Krushna said.

The boat wasn’t big enough for the group but they packed into it. “There was always the fear of being caught by the Coast Guard or the Indian Navy but nothing of that sort happened. By God’s grace the sea was not rough and the initial journey was smooth.”

The group kept within 15km of the shore and kept track of the route by watching the stars. “Our mobile phones also helped. We had brought a battery charger,” said Landa Bhaskar Rao, another member of the group, adding their staple for those five days was rice and tomato chutney.

They kept the engine on through the night and till 11 in the morning, when they would unfurl the sail. But that sometimes slowed them down when the wind was not favourable. “It was quite tough. On the way, our 9HP engine developed a technical snag. One of us managed to repair it,” said Karri Nakaraju, another member of the group. They had a back-up engine too.

Did they have the sea all to themselves? Not really, they smiled. A number of dolphins showed up once in a while.

At Ichhapuram, police waited at the shore as friends of the migrants from Andhra had called up their relatives and informed them that the group was reaching the coast, thanks to mobile connectivity. “These relatives had informed the police. When we reached the coast, the police were waiting for us and asked us to get down from the boat,” Krushna said.

Their plan, Krushna said, was to drop the Andhra group at Ichhapuram and then proceed towards the Odisha coast. “That was not to be. We were taken to the quarantine centre. Now we will be able to go home only after the restrictions are lifted,” Krushna said. “But we have the satisfaction of being close to home.”