As no other state has registered such an ask from the Centre, the lack of response raises the question whether a bottleneck exists somewhere in the chain 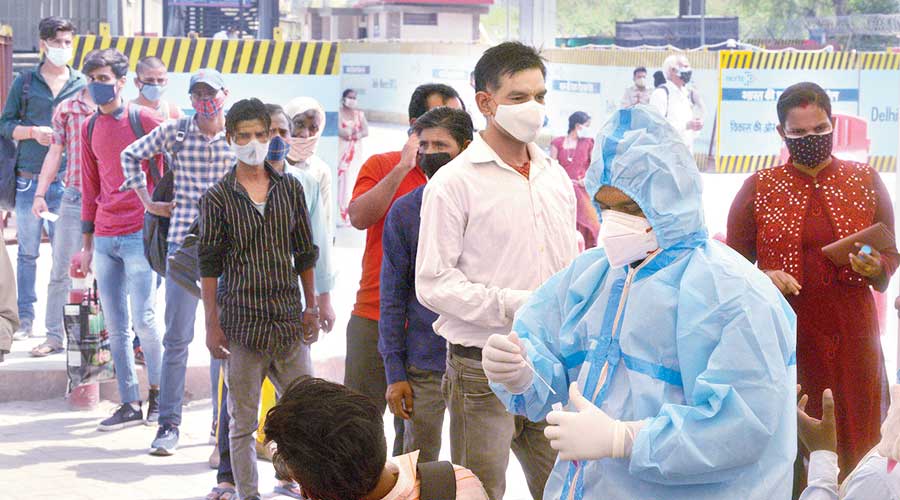 No state barring Telangana and Meghalaya has so far sought additional foodgrain from the Centre for providing free rations to migrant workers in pursuance of a Supreme Court judgment in June, an RTI reply has revealed.

While the information need not mean migrants across the country are being denied grains — some states like Bengal are providing such help to the needy from their own resources — the lack of response does raise the question whether a bottleneck exists somewhere in the chain.

According to RTI activist Anjali Bharadwaj, information obtained under the Right to Information Act from the department of food and public distribution of the central government shows that despite the Supreme Court order, no tangible provisions have been put in place to provide free rations to migrant workers who do not possess ration cards.

On June 29, 2021, in a case the Supreme Court had taken up suo motu, it had issued several directives to ensure food security for migrant and unorganised sector workers.

“Information accessed under the RTI Act shows that the central and state governments have failed to comply with these directions,” Bharadwaj told The Telegraph.

She said she had filed the RTI application with the Centre’s food and public distribution department seeking the following information.

⚫  The names of states that have sought additional dry foodgrain from the central government for disbursement among migrant labourers.

⚫  Copies of the letters/ communication/ correspondence through which the foodgrain had been sought.

⚫  Details of the quantity of additional foodgrain allocated by the Centre to each state government in August 2021.

The reply stated that only the state governments of Telangana and Meghalaya had sought additional foodgrain from the Centre for providing rations to migrant labourers in pursuance of the apex court judgment.

According to Bharadwaj, the department refused to furnish the correspondence on grains for migrants, claiming such information was exempt under Section 8(1)(e) of the RTI Act that pertains to information held in a fiduciary capacity. She said this was a violation of the RTI Act.

On her plea seeking details of the allocations made to the states and Union Territories, the RTI reply stated that “so far no additional allocation of foodgrains has been made by this department to any state government” other than those of Telangana and Meghalaya.

Bharadwaj had filed another RTI application with the department seeking details of the steps taken to implement the directive of the Supreme Court regarding re-determining coverage under the National Food Security Act. The reply states: “...Any revision in the State/UT-wise coverage shall be possible after the data of next census.…”

Bharadwaj said: “This means that the government is looking at any revision only in 2023-24 when the next census is likely to be published. This would defeat the very purpose of the judgment.”

In June, the Supreme Court had directed the Centre and the states to ensure that the National Database for Unorganised Workers (NDUW Project), as well as various public distribution system schemes for unorganised and migrant labourers, are implemented by all means by July 31, 2021, including the policy of “one-nation-one-ration-card” for such beneficiaries.

The court had also said the Centre must provide additional foodgrain to the states and Union Territories upon the latter’s demand for implementing the special schemes for the unorganised and migrant labourers.

A bench of Justices Ashok Bhushan (since retired) and M.R. Shah had passed the following directives while disposing of a batch of applications filed by the NGO Bandhua Mukti Morcha and others seeking relief for unorganised sector workers and migrant labourers, who had borne the brunt of the pandemic:

⚫ The central government must develop a portal on the National Database for Unorganised Workers (NDUW Project) in consultation with the National Informatics Centre for the registration of unorganised labourers and migrant workers. The Centre as well as the states and Union Territories must complete the process of setting up the portal not later than July 31, 2021.

⚫ The registration of unorganised labourers and migrant workers is to be completed at the earliest, but not later than December 31, 2021. The states and Union Territories and the licence holders and contractors will have to cooperate with the central government to complete the process of registration so that the benefits of the welfare schemes reach the beneficiaries.

⚫ The Centre is to allocate additional dry foodgrain as demanded by the states and Union Territories for distribution among migrant labourers.

'Most migrants didn’t get rations'