Men in shell, women pick up protest baton in Srinagar

The women were later shifted to Srinagar’s Central Jail, their arrest and detention aimed at sending across a message 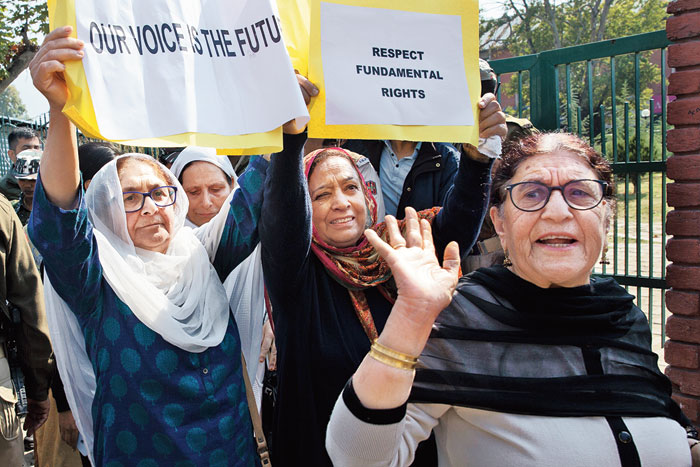 A group of women from Kashmir were on Tuesday detained after they defied police and staged a protest — the first of its kind by the Valley’s civil society — against the central government’s August 5 decision to scrap the state’s special status.

The women were later shifted to Srinagar’s Central Jail, their arrest and detention in the Valley’s main prison apparently aimed at sending across a message that no dissent would be allowed even if it involved women from the higher rungs of society.

Sushobha Barve, executive director, Centre for Dialogue and Reconciliation, and former teachers Qurat ul Ain, Ruqaya Sayeed and Basaharat Khan were among the other participants.

The protest came a day after the authorities partially lifted the suspension on cellphones but the ban on text messages was re-imposed later in the night, apparently over fears of mobilisation by protesters.

DIG, Central Kashmir, V.K. Birdi said legal action had been initiated against the women. “I think a magistrate has sent them to the Central Jail…. I think 13 would be the number (who have been arrested),” Birdi told The Telegraph.

Srinagar police chief Haseen Mogal said “there was a breach of peace” after which “these ladies” were “produced… before a magistrate”.

Politicians and civil society members in the Valley had gone into a shell after a government clampdown led to hundreds of arrests since the Centre moved to scrap Jammu and Kashmir’s special status under Article 370.

The only protest in the city centre before Tuesday’s had been led by the Valley’s journalists who had protested the information blockade. They had been spared arrest but Tuesday’s protest was explicitly political, the reason the participants were bundled into vehicles and taken to jail.

A lone doctor who had earlier highlighted the sufferings of patients because of the government-enforced restrictions had met a similar fate in August. He was released later.

There have been protests by ordinary Kashmiris during the past 10 weeks, but nothing on the scale the Valley has witnessed in the past.

On Tuesday, the women, wearing black bands and carrying placards denouncing the August 5 decision, had assembled around noon in the city’s Pratab park, where police ordered them to disperse. Some of the women then defied the police and moved towards Moulana Azad Road.

The forces had in the meanwhile been joined by women CRPF personnel, who dragged the protesters towards security vehicles.

“We are humiliated and we feel betrayed. This was a peaceful protest,” a former academic shouted before her arrest.

Hawa Bashir, wife of former high court judge Justice Bashir Khan and mother of actor Aamir Bashir, said lies were being spread that Kashmiris were happy the state’s special status had been scrapped. “You are saying outside Kashmiris are happy, Kashmiri women are happy, but we are not. Ask us why we are not happy, have a discussion with us. At least talk to anyone,” she said.

A relative of one of the protesters said: “Their medical examination was conducted and it was a prelude to that (arrest).”