Rahul Gandhi today bluntly said the media were not doing their job for fear of reprisal, treading a path that most politicians shun and not allowing the Congress's dark Emergency-era past to hold him back from speaking out on the present. 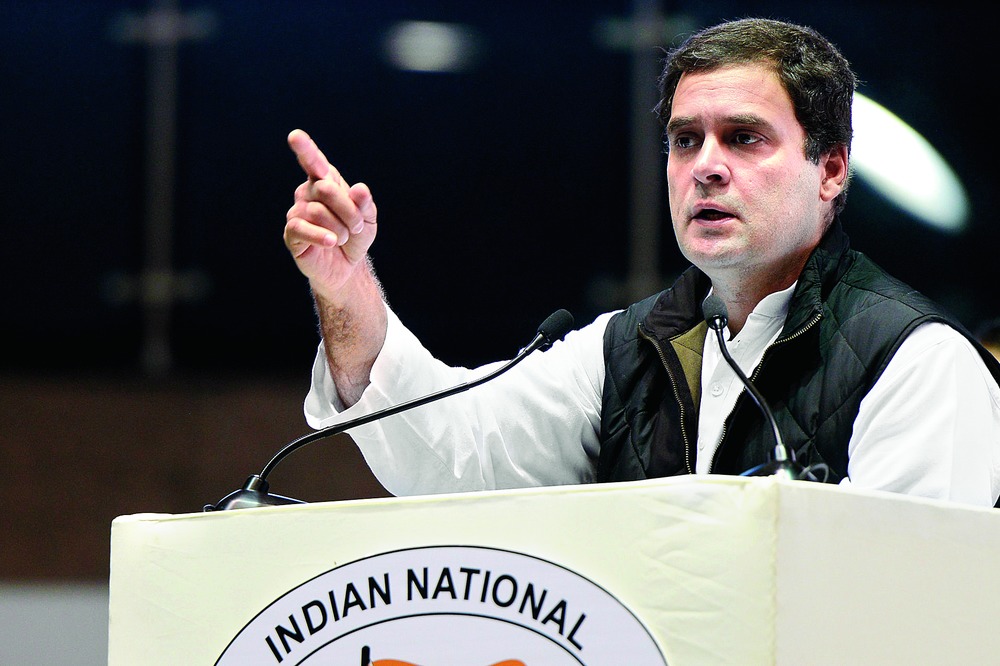 New Delhi, Jan. 11: Rahul Gandhi today bluntly said the media were not doing their job for fear of reprisal, treading a path that most politicians shun and not allowing the Congress's dark Emergency-era past to hold him back from speaking out on the present.

"The media are under certain constraints. In their heart, they know what is happening. They come to me, saying we can't do much... hawa badal gayi hai (the situation has changed)," Rahul told a Congress conclave organised to highlight the pain of demonetisation.

The Congress leader returned to the theme later, saying journalists fear that a phone call is enough to leave them jobless.

Fear was the factor with which Rahul targeted the Prime Minister and the RSS, too, saying: "This is an old fight between two philosophies: one that says daro mat (do not fear), the other which says daro aur darao (be afraid, and instil fear in others)."

Some leaders tried to explain away Rahul's critique of the media in his inaugural address as spontaneous remarks made in "jest".

But he again broached the topic in his concluding speech, suggesting he was keen to bring the media's role within the domain of public discourse. Rahul has pressed ahead with articulating his assessment of the prevailing situation in spite of the possibility of a backlash as well as renewed focus on the skeletons in the Congress's own closet.

At the Jan Vedna Sammelan this morning, Rahul referred to the media in the context of what he called "tremendous pain" in society caused by demonetisation. The Congress feels the issue was not adequately debated before it was implemented.

Rahul was laughing, probably trying to create the impression that he was speaking without malice. But he went on: "We understand their nervousness. But you have a responsibility. You have to show the pain of the people. You shouldn't shy away from responsibility."

Rahul said: "The media spoke freely when Manmohan Singh was the Prime Minister, when Chidambaram was the finance minister. Now they don't open up. They say dar lagta hai, phone aa jayega, naukri chali jayegi (We are scared, a phone call will come, we will lose our jobs). We understand... we don't want to put you in trouble."

Again, commenting on the Modi regime's alleged tendency to destroy institutions like the RBI, he said: "We respected the press, shayad bahut zyada ki (perhaps, respected too much)."

But Rahul made no mention of the Emergency, imposed in 1975 by then Prime Minister and his grandmother Indira Gandhi, when the media were subjected to severe censorship and several journalists were imprisoned. That dark past has often dissuaded Congress leaders from speaking out in public against the media as a collective entity.

Today, Rahul wondered why questions were not being raised by the mainstream media on the cause of reverse migration from cities, job cuts and losses suffered by small traders and industries. Some media organisations did report on such developments but Rahul appeared to be suggesting that a large section of the mainstream media did not do so.

Older leaders in the Congress displayed the older insecurities. They played down the comments - some claiming the remarks were casual and made in jest while some felt the attack was on the government, not the media.

But a young leader said: "What Rahul said should trigger some introspection in the media. He does feel a large section of the media was biased and refused to critically examine Modi's decisions..... Many of us share that perception."

Another leader said: "A section of the media has become partners in crime. Most editors want to be on the right side of the government."

Rahul picked up the same thread in his concluding address. "The message to the media is - daro mat (fear not). We are with you. Mere peechhe pade rahte hain magar mere mitr hain (They are after me but still I consider them to be friends). They have a role in democracy. I tell them daro mat. I said something in the morning, many journalists told me they liked it."

He added: "The press can write about me whatever they want. I can assure them I will never threaten them."