They travel around 1,000km to lay eggs, officials said 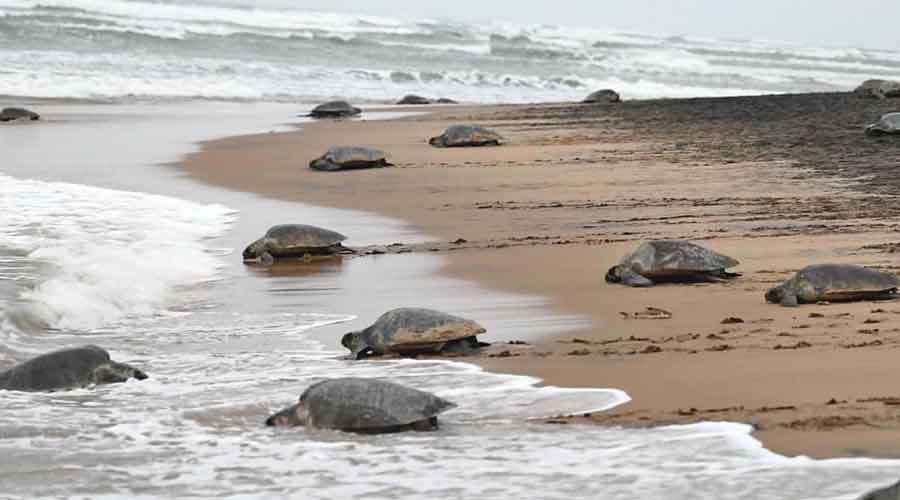 Around 5 lakh Olive Ridley turtles have arrived at the Gahirmatha Marine Sanctuary in Odisha’s Kendrapara district, about 100km from here, for mass nesting. Mass nesting of these endangered turtles is a natural phenomenon much awaited by nature lovers and wildlife enthusiasts.

Divisional Forest Officer (DFO), Rajnagar Wild Life Division, Kendrapara district, Jagyandatt Pati told The Telegraph: “The turtles reached the Gahirmatha marine sanctuary on March 25 and mass nesting has begun. On March 25, 2.4 lakh turtles crawled ashore for mass nesting. On the next day on March 26, 1.85 lakh reached and on March 27, 65,000 turtles arrived for mass nesting. We expect this process to continue for another four to five days. The turtles which have laid the eggs, have also started leaving the beach near the sanctuary.”

Gahirmatha was declared a marine sanctuary covering 1,435 sqkm from Dhamra mouth (in Bhadrak district) to Hukitola island (in Kendrapara district) by the government in 1997 with the specific purpose of protecting the Olive Ridley turtles, which are listed under the Endangered Species Act. They travel around 1000km to lay eggs, officials said.

Pati said: “The entire mass nesting process is being recorded. We wait for the arrival of the turtle. Now, it’s good news that turtles have arrived and started nesting. In order to count the exact number of eggs, we have divided the entire beach near the sanctuary into 28 sectors. Each sector of the beach is nearly 100 metre in width.”

Officials said that most turtles have landed at Nasi-1 and Nasi-2 islands (close to the defence installations at the wheeler’s island) of Gahirmatha marine sanctuary within the Bhitarkanika National Park. Last year, around 4 lakh turtles laid eggs in the sanctuary area from March 9-23. “We are expecting the arrival of 7 lakh Olive Ridley turtles this time,” said Pati.

The joy of watching the mass nesting of these eco-sensitive creatures will be doubled for state wildlife officials as there was a delay of over 25 days in the arrival of the turtles which had created an apprehension that the turtles might skip their annual sojourn this year.

Explaining zero nesting, the DFO said: “Sometimes turtles come but due to various reasons like climatic conditions, they return without laying eggs. So far no scientific reasons have been given for this phenomenon. However, this time they have started laying eggs.”

The mass nesting of turtles is expected to continue for a week as eggs normally take 45 days to hatch. After that the hatchlings will make their way to the sea. “When more than 10,000 turtles lay eggs on a beach we call it mass nesting. Besides, there has been sporadic nesting at many places along the Odisha coast,” officials maintained.

Besides the Nasi I and II islands of Gahirmatha, which are considered ideal nesting sites, the turtles have also reached the Rushikulya (in Ganjam district) and Devi river mouths (in Puri district) for mass nesting.

In order to protect turtles and their eggs from poachers and predators like dogs, jackals, boards and birds, the forest department has deployed officials including forest guards to guard the Gahirmatha beach. “Round the clock vigil is being maintained. The state government has imposed a ban on fishing activities inside the marine sanctuary from November 1 to May 31 to protect the turtles,” officials said.

Ban on fishing inside the sanctuary and in the sea close to Devi and Rushikulya river mouths became necessary as the fishing trawlers operating in these areas kill a large number of turtles every year. Mechanised fishing vessels, mainly the trawlers, have been violating the fishing ban regularly.