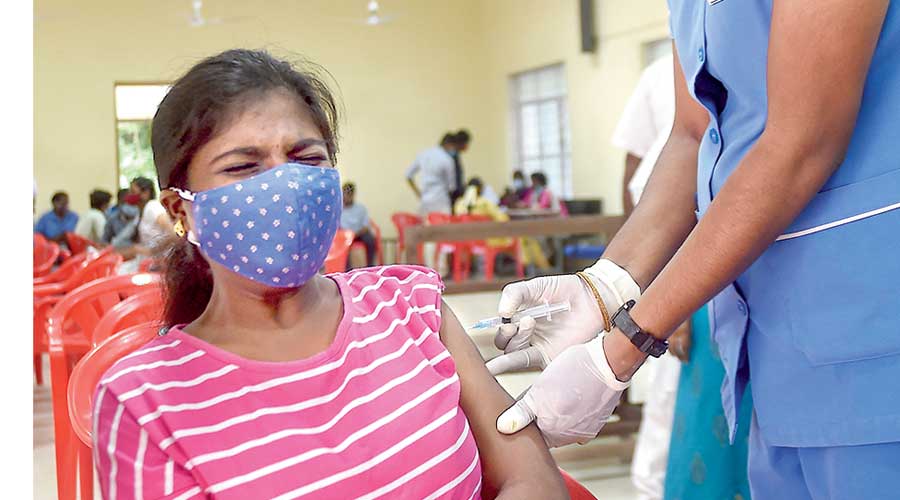 Union health minister Mansukh Mandaviya said on Wednesday the government was going to launch a mega vaccination campaign next month against the coronavirus disease.

As part of the 'Har Ghar Dastak' drive, healthcare workers will conduct door-to-door vaccinations of people eligible for second dose as well as those who are yet to be administered their first jab as a shield against the virus, the health minister said.

He added that special focus will be laid during the drive on 48 districts across the country where less than 50 per cent of the eligible population has been vaccinated against Covid-19.

Mandaviya made the announcement after holding a meeting with his counterparts and representatives from states and Union Territories to discuss scaling up of the vaccination drive in the country.

He further said 77 per cent of the eligible population in India has been vaccinated with the first dose, while another 32 per cent have been fully inoculated.

However, more than 10 crore people have not yet taken the second dose of the vaccine, the health minister said, while urging them to go ahead with completing their course.

The minister also asked officials at the meeting to focus on such beneficiaries who are overdue for their second dose.

Also, over 3.38 crore people are up to two weeks overdue to becoming fully vaccinated.

The gap between the first and second dose is 12 weeks for Covishield and four weeks for Covaxin. Both doses are needed for adequate protection against severe Covid-19 infection and hospitalisation.

The 11 states and UTs that have completed administering both doses to more than half of their eligible beneficiaries are Lakshadweep, Sikkim, Goa, Ladakh, Andaman and Nicobar Islands, Chandigarh, Himachal Pradesh, Mizoram, Daman and Diu, Arunachal Pradesh, and Jammu and Kashmir.