Lost glory... and a lost childhood 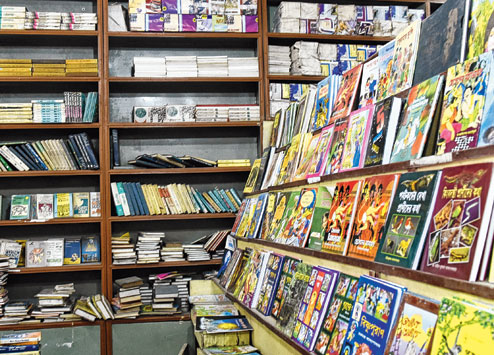 You can almost miss this Calcutta landmark in Bankim Chatterjee Street, at one with other grey buildings in the street, many of them landmarks like the Mahabodhi Society next door. But if you do enter, you see in its dimly lit interior bits and pieces from your childhood resting on the shelves. And traces of the history of a huge, former nation.

Some of the beautifully illustrated Russian fairytales and children’s stories, in English and Bengali, which we grew up reading and the Russian literary classics by Tolstoy, Dostoevsky and Chekov, hardbound, severe-looking but well-produced and absurdly cheap, which we grew up looking at, still wait in the shelves at Manisha Granthalay.

This was the bookstore from where most of these publications were sold in the city.

The shelves now sport the last remaining copies. The publication of these books stopped in 1991, the year the Soviet Union was disbanded.

Official literature from the Soviet Union, including propaganda writing, had begun to travel to British India from the 1930s after Moscow set up its agency for publication in foreign languages in 1931. From the 1950s, Russian literature began to be translated into Bengali.

“Progress Publishers, or Pragati Prakashan as it was called in Bengali, was set up in 1963,” says Arun Som, who worked in Moscow as a translator from 1974 to 1991. Other Bengali translators included poet Samar Sen in the 1950s, and later Nani Bhowmik, the actor Radharaman Bhattacharya, the poet Kamakshiprasad. Moscow in those days was keen to spread its word across the world.

“Books in Russian would be translated into 56 languages,” says Som. Among the 50-odd books he has translated are Quiet Flows the Don by Mikhail Sholokov and Fathers and Sons by Turgenev. If a translation fell short of expectations, the editorial team would be fined.

At first, books from the Soviet Union would be sold through National Book Agency outlets in India. The CPI broke into two in 1964, creating the new party, the CPM, which was strong in Bengal. The fear that the divide might hurt the flow of Russian literature into this part of the country led to the establishment of Manisha Granthalay on May 18, 1964, says Bhanu Deb Dutta, who heads Manisha’s board of directors now.

The birth of the bookstore was a moment of glory not only for the communists but for the city too. It brought the most luminous personalities together, not necessarily communist sympathisers.

“The name was given by poet Bishnu Dey, the logo was designed by Satyajit Ray and the store was — and still is — housed in a place owned by a family member of the poet Sudhin Dutta. Jamini Roy gifted an oil painting. The store was inaugurated by scientist Satyendra Nath Bose,” says Dutta, author of a 15-volume series on the communist movement in Bengal.

Marxist intellectual Chinmohan Snehanabish then headed the board of directors.

Manisha, meaning “intellect”, would get books in translation from the three publishing agencies in Russia: Progress Publishers, which focused on political writing, Raduga, which mainly published classics and literary writing, and Mir, which published science writing. The glossy magazines Soviet Desh and Soviet Nari, available at a nominal price and recycled widely as book covers, were distributed by Manisha.

When the Russian publishing houses closed down in 1991, it hit Manisha hard.

In the years that followed, the political atmosphere in Bengal changed too. The CPM would lose power in 2011, but from a few years before that the demand for communist literature showed a steady decline.

Manisha, which would stock books from other publishers as well, began to stock them more. Now, while some of its shelves have the old Russian books on display, a few among them available at less than Rs 100, others sport new publications, many of them for children.

“We have three to four copies of each of the Russian books. But we are managing to run our business,” says Dutta.

The Jamini Roy is still somewhere there, he says.