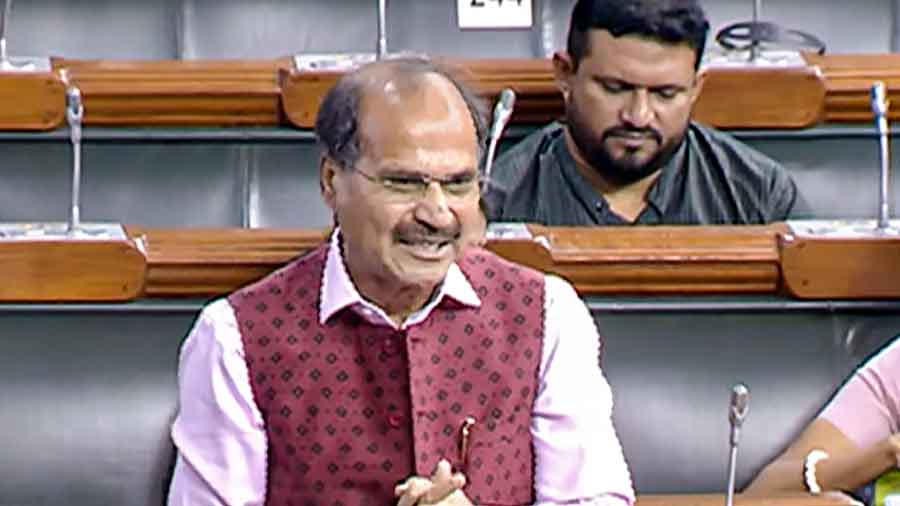 Lok Sabha proceedings were adjourned for the day on Thursday amid sloganeering by Congress members against the alleged misuse of the Enforcement Directorate by the government.

As soon as the House met at 2 pm, papers were laid on the table and two resolutions adopted amid continued sloganeering by Congress members.

Kirit Solanki, who was in the chair, requested the protesting members to go back to their seats and allow the House to function after which he adjourned the proceedings for the day.

Earlier in the day, Lok Sabha proceedings were adjourned till 2 pm as soon as Congress members displayed placards to protest against the actions of the Enforcement Directorate and price rise.

Amid the sloganeering by Opposition members, the Question Hour went on till around 11:30 am and five questions as well as their related supplementaries were taken up.

Congress and other Opposition members protested against the ED action, GST on essential items and price rise.

However, at around 11:30 am, as soon as some Congress members displayed placards standing in the Well of the House, Speaker Om Birla adjourned the proceedings till 2 pm.

Congress leader in the House Adhir Ranjan Chowdhury was the first to display the placards and other members then brought placards to the House.

Earlier this week, when Birla had revoked the suspension of four Opposition members, he had also made it clear that they should not display placards inside the House.

As soon as the proceedings began on Thursday, Opposition members sought to raise various issues and shouted slogans. With the Speaker not allowing them to raise the issues, Congress members trooped into the Well of the House while those from the DMK, NCP and CPI-M, among others, protested by standing at their seats.

Earlier, Birla asked the Congress members, who were protesting in the Well, to go back to their seats. The Speaker also warned that he would have to take action if they continued to stand in the Well.

The lines 'Save Constitution, Save Democracy' and 'GST hurting common people' were written on the placards. Besides, the members also protested against price rise.

While the protests were continuing, DMK member S R Parthiban (DMK Salem) asked a supplementary question and at that time, Birla and DMK leader T R Baalu were seen smiling at each other since the Southern party was also protesting.

During the Question Hour, the Speaker also told Power, New and Renewable Energy Minister R K Singh that as a minister he should be knowing the rules and that documents have to be tabled in the House and not directly given to the members. The remark came after Singh replied to a supplementary question related to renewable energy.

On Wednesday, the ED temporarily sealed the office of Young Indian (YI) company housed in the premises of Congress-owned newspaper National Herald here as part of an ongoing money laundering investigation.

Later on Wednesday, the road to AICC headquarters was blocked by the Delhi police with the Congress saying policemen were deployed there and claimed the party was "under siege" by the Modi government.