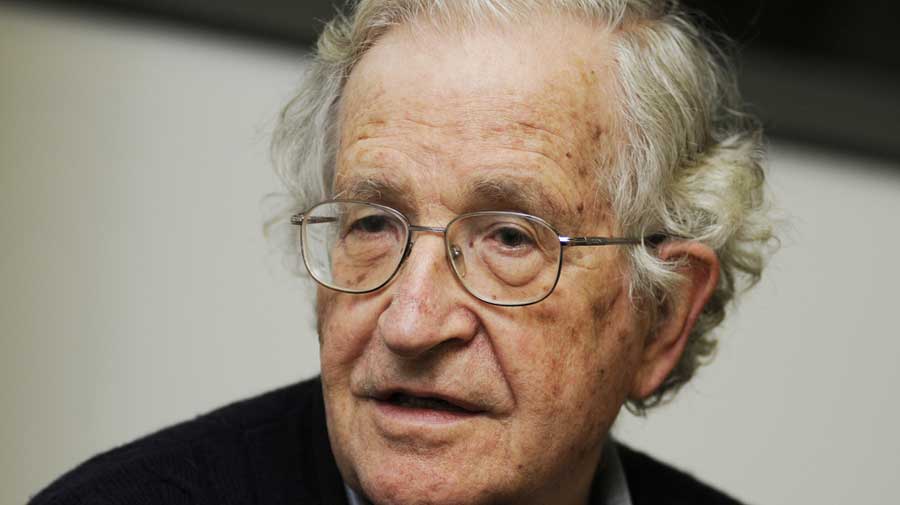 A Tata-sponsored online literature festival in Mumbai cancelled a session by Noam Chomsky and Left thinker Vijay Prashad on Friday night hours after they had hinted at speaking out against the Tatas. They later said they had decided to flag concerns over the “erosion of democracy” in India and the Citizenship Amendment Act (CAA).

“Since we do not know why Tata and Mr (Anil) Dharker (the festival director and veteran journalist) decided to cancel our session, we can only speculate and ask simply: was this a question of censorship?” Chomsky and Prashad said in a statement on Left news site Peoples Dispatch.

They said the subjects they would have broached at the session included how governments like the BJP’s and corporations like the Tatas were “hastening humanity towards a deeper and deeper crisis”.

Chomsky, 91-year-old laureate professor of linguistics at the University of Arizona, is also a scholar of repute in philosophy and cognitive science and is known for his criticism of US foreign policy and unbridled capitalism.

They were to appear at the Tata Literature Live! The Mumbai Litfest at 9pm on Friday at a session titled “On the edge of a precipice”, where they were to discuss Chomsky’s latest book, Internationalism or Extinction.

The revised schedule of the festival, of which the Tata group is the main sponsor, had “The thrill and challenges of writing a first book” from 8.30pm to 9.30 pm on Friday.

The change in schedule came hours after Chomsky and Prashad had responded to a public statement by activists who demanded that the duo boycott the festival to avoid becoming “a tool in the Tatas’ propaganda against the Adivasi people of India”.

In their response on the website Countercurrents.org, Chomsky and Prashad had said: “We will start the programme with Vijay reading a statement written by the two of us. This statement makes it very clear how we feel about corporations such as the Tatas, and the Tatas in particular.”

On Saturday night, Dharker said in a statement: “I do not wish to comment on their reasons for accepting an invitation to participate in an event and using the platform to air adverse views about the main sponsor. What I do want to state as strongly as possible is that the festival which I founded and run with a dedicated team owes its success to a free expression of ideas, not a free expression of someone’s specific agenda. The expression of such an agenda -– whether against a specific organisation, a corporation or an individual -– is therefore misplaced in the discussions at our festival.

“In conclusion, cancellation of the session is a considered decision I have taken in my capacity as Festival Director. Much as I deeply respect and admire the work of Prof. Noam Chomsky, this decision was necessary to protect the integrity of the festival.”

Roshan Ali, author of Ib’s Endless Search for Satisfaction and scheduled to chair a session on Saturday evening, tweeted earlier in the day that he would not be participating because of the abrupt cancellation of the session by Chomsky and Prashad.

“I cannot in good conscience take part in a festival that lets its sponsors dictate who can or cannot speak or what can and cannot be said,” Ali said.

Ashok Swain, who teaches international relations at Sweden’s Uppsala University, tweeted: “The discussion between Vijay Prashad and Chomsky was cancelled at the Tata Mumbai festival last night as Tata didn’t want to antagonise the govt. Tatas, Ambanis, and Adani are the three pillars of the present govt.”

Chomsky and Prashad said in their statement: “The advertisement was circulated and the team at Mumbai (Tata) Lit Fest had confirmed all the details. The last communication came in at 9am Indian Standard Time on November 20 to remind us of the zoom link and other details.

“Then, out of nowhere, near 1pm Indian Standard Time, we received an email which said, cryptically, ‘I am sorry to inform you that due to unforeseen circumstances, we have to cancel your talk today’. Further inquires informed us to be in touch with the festival’s director, Anil Dharker. No communication has been established thus far with Mr Dharker.”

“Regarding India, the issue of the erosion of democracy is a serious matter, with the passage of bills such as the Citizenship Amendment Act (CAA) and the vast sums of money that have now suffocated the voices of the hundreds of millions of impoverished Indian voters as examples of the problem; the issue of warfare is significant, with the Indian government participating in the highly destabilising Quadrilateral Security Dialogue with Australia, Japan and the United States.

“Regarding the Tatas, we wanted to put on record a few facts that should lead sensitive people to understand what the Tata company has underneath its fingernails: a role in the killing of Adivasis who were peacefully protesting the construction of a Tata steel factory in Kalinga Nagar, Odisha, in 2006; the use of private militias to terrorise the population for a planned Tata steel factory in Jagdalpur, Chhattisgarh, about 10 years ago; the use of Tata Advanced Systems weapons by the Indian forces against the people of Kashmir; and Tata steel’s release of hexavalent chromium into water sources has created the fourth most polluted place on the planet in Sukinda, Odisha.

“These are just a few examples of the atrocious way in which the Tata corporation has brought levels of extinction to the peoples of the planet. We wanted to talk about how governments such as those led by the Bharatiya Janata Party and corporations such as the Tatas are hastening humanity towards a deeper and deeper crisis.”

The pandemic has led to the cancellation of a few literature festivals. However, the Tatas have retained their sponsorship of the fest in Mumbai and the upcoming Kolkata Literary Meet in Calcutta.