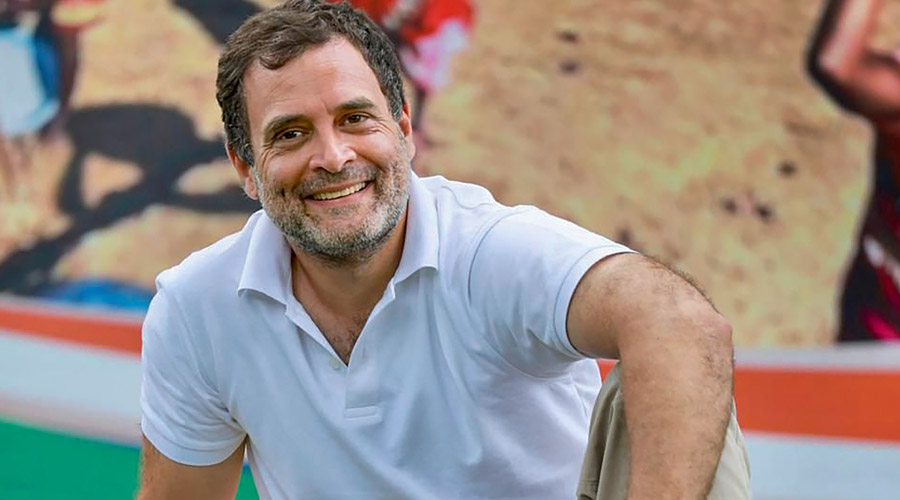 If a false accusation doesn’t get him, a lewd hint will.

After BJP spokespersons and ministers adopted this motto to target Rahul Gandhi amid the Bharat Jodo Yatra — with little success — a troll whose Twitter profile describes her as a “BJP Karyakarta” tried her luck on Saturday.

But Priti Gandhi’s effort, on a day Rahul and the Yatra appeared to receive a thumbs-up from Hollywood actor John Cusack, too fell flat.

Priti had tweeted two pictures — one of Rahul hugging a young woman with cropped hair, and the other of a lookalike of the woman — with the comment: “Look carefully. Not Bharat Jodo, this is Bharat Todo!”

The lookalike was Amulya Leona Noronha, a Bangalore-based activist who was arrested in February 2020 for allegedly chanting “Pakistan zindabad” at a protest against the new citizenship matrix. The insinuation clearly was that the women in the two pictures were the same person, and Rahul was embracing a pro-Pakistan activist.

However, the woman with Rahul was Youth Congress leader Miva Jolly, as party leaders quickly underlined.

After being released on bail, Amulya, who was then 19 and a journalism student, has rarely been seen in public and has not joined the Yatra.

Perturbed by the stupendous success of #BharatJodoYatra, BJP’s Dirty Tricks Department is working overtime. A video grab of @RahulGandhi with Ms.Miva Jolly, KSU Eranakulam Dist.Secy is the latest fodder for their lie machine. Mitron, how low can you stoop? pic.twitter.com/dirQZdLX6Y

“A video grab of @RahulGandhi with Ms Miva Jolly, KSU Eranakulam Dist Secy is the latest fodder for their lie machine. Mitron, how low can you stoop?”

Miva had shared the picture with Rahul on her Instagram page, Miva Andreleo — the second name reflecting her admiration for footballer Lionel (Leo) Andres Messi.

Priti’s was only the latest in a series of BJP attempts to use falsehood, innuendoes and trivialities to deflect attention from the crowds the Yatra has attracted in Tamil Nadu and Kerala.

On Saturday, an endorsement of sorts for the march came from thousands of miles away, with Cusack tweeting: “Indian Parliament member Rahul Gandhi is walking to Kashmir — from Kerala.”

Lavanya Ballal, general secretary of the Congress communications wing who is part of the walkathon, tagged Priti to inform her she would soon get a lawyer’s notice for her malicious comments.

Her bluff called, Priti came up with a more vitriolic tweet, accompanied with the same picture of Rahul and Miva.

“But what is it with Rahul Gandhi? Why does he grab young girls to get pictures? Last time, we were told she is his niece but what’s the excuse now? He isn’t the father figure types & even if he is, why get so intimate for photos? This excessive display of affection is troubling!” Priti wrote.

But what is it with Rahul Gandhi? Why does he grab young girls to get pictures? Last time, we were told she is his niece but what's the excuse now? He isn’t the father figure types & even if he is, why get so intimate for photos? This excessive display of affection is troubling! https://t.co/dcPe49qpar pic.twitter.com/kZ2e7ERkfr

A week ago, the BJP’s Tamil Nadu IT cell chief, C.T. Nirmal Kumar, had posted an old photograph of Rahul holding a young woman’s hand. Many had read a sexual innuendo in the tweet.

After Congress leaders emphasised that the young woman in the picture was Rahul’s niece, Kumar deleted the tweet and claimed he had meant only to question Rahul’s seriousness as a political leader.

“Priti, is your upbringing Ghatiya (rubbish) or became (so) after the training of BJP’s hate cell? I was just behind Rahul Gandhi ji at the time of this photo, This girl is our dist secretary of KSU-NSUI, she hugged Rahulji with respect, but you, being a woman, have such dirty thoughts, shameful,” Bittu wrote.

Priti, is your upbringing Ghatiya or became after the training of BJP's hate cell?

I was just behind Rahul Gandhi ji at the time of this photo, This girl is our dist secretary of KSU-NSUI, she hugged Rahulji with respect, but you,being a woman,have such dirty thoughts, shameful. https://t.co/Il1Rl9BgpM

A Twitter user named Joel Thomas Mathews posted a video clip in which Miva is seen walking with Rahul. “This video is not to rattle you or irritate you, but to let you know how affectionate are people towards @RahulGandhi in the #BharatJodoYatra. May love prevail over hate and anger!” he wrote.

Some suggested that comments such as Priti’s deserved prosecution.

“Definitely there should be FIR against all these bigot (sic) like Priti Gandhi who is (sic) defaming these girls with fake post. These fringe elements are dangerous for India’s ‘Beti’,” Jamil Qureshi tweeted.

On September 18, BJP IT cell chief Amit Malviya had falsely claimed that Rahul had not delivered “a single public speech” since the inauguration of the Yatra three days earlier.

Before that, Union minister Smriti Irani had inaccurately accused Rahul of failing to pay homage to Swami Vivekananda before the Yatra’s Kanyakumari launch, although the Congress leader had visited the Vivekananda Memorial.

The BJP’s social media mill has also tried to ridicule Rahul over his T-shirt and sneakers — claiming they were expensive foreign brands, inappropriate for the occasion – and the “five-star” shipping container caravans where he and other marchers have been staying overnight.