The Left Unity alliance on Sunday swept the JNU student elections for the third straight year after an abrasive electoral battle with the ABVP, marked by fisticuffs during the presidential debate and counting. 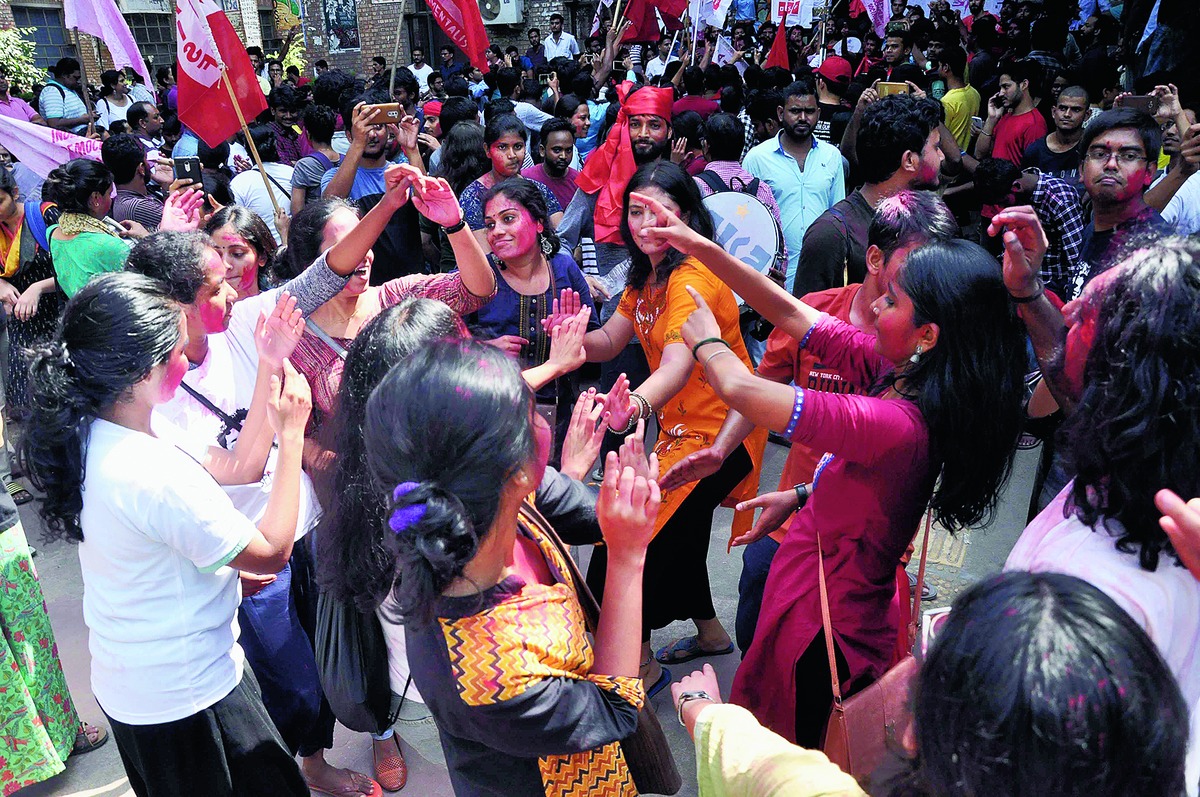 New Delhi: The Left Unity alliance on Sunday swept the JNU student elections for the third straight year after an abrasive electoral battle with the ABVP, marked by fisticuffs during the presidential debate and counting.

"Students stood against violence as well as the anti-student policies of the government of the vice-chancellor," students' union president-elect N. Sai Balaji told reporters.

"This victory is a message to people across the country that if we stand united, we can defeat the fascist forces repeatedly despite all their efforts to capture elections and convert Hindustan into lynchistan."

During Wednesday's presidential debate, scuffles had broken out in the audience with ABVP supporters pitted against those of the Left, Birsa Ambedkar Phule Students Association (Bapsa) and the North East Students' Forum, a non-electoral group opposed to the ABVP.

The violence peaked on Saturday, with ABVP supporters accused of barging into the counting centre to protest against the votes being counted in the absence of their counting agent. Several students were injured and a few are still in hospital.

Despite the most violent campaign on the campus since 2007, the turnout on Friday was a record high at 67.8 per cent.

The results were declared on Sunday afternoon following a nearly 15-hour delay, caused by an ABVP sit-in that halted counting.

Balaji, a PhD student from Hyderabad at the Centre for International Politics, Organisation and Disarmament, was the candidate of the CPIML Liberation-backed All India Students Association.

Sarika Chaudhary from Muzaffarpur in Bihar, who is doing an MPhil from the Centre for the Study of Regional Development and is a member of the Democratic Students Federation, is vice-president-elect. She won the highest votes in this election: 2,692 out of 5170.

The CPM-backed SFI's Aejaz Ahmad Rather, a PhD scholar in history from the Marxist stronghold of Kulgam in Jammu and Kashmir, is the general secretary-elect.

Amutha Jayadeep of the CPI-backed All India Students Federation, a PhD scholar in social medicine and community health who is from Kozhikode in Kerala, has been elected joint secretary.

The Left Unity's average vote share for these main four posts was 45.1 per cent, higher than the cumulative average of the Left Unity and the AISF last year, which was 42.8 per cent.

The ABVP came second for all four posts, its average share dropping from 21.5 per cent to 25 per cent.

ABVP presidential candidate Lalit Pandey said: "The winners have compromised their ideologies and come together for the lust of power. We remain the organisation with the single largest vote share and our popularity has only risen."

He added: "We will continue to keep the focus of the student movement grounded on issues of this campus. This culture of a kangaroo court, of attacking opponents and trying to manipulate elections, is not good and they must learn to accept victory with dignity."

She had contested on the plank of demanding the truth about the mysterious death of her father, Arunachal MLA Ngurang Pinch, last year.

The NSUI's vote share has risen from 3.9 per cent to 9.4 per cent. But its JNU unit has suspended four of its members for allegedly working against its presidential candidate, Vikas Yadav.

Until this year, the AISF had fought outside the Left Unity, which was formed in 2016 after the sedition controversy and the arrest of then students' union president Kanhaiya Kumar of the AISF.

The AISF at JNU had remained "ideologically pure" until several splits in its unit --- this year its former secretary, Jayant Kumar, contested for president from the Chhatra Rashtriya Janata Dal and came fourth.

The nominations were rejected for two of the 31 posts of councillors, leaving 29 in the fray. Two Independents were elected unopposed and 10 other Independents got elected. Five AISA, six SFI and three DSF candidates were elected, as were three from the Scholars Movement for Education Reforms and one each from Bapsa and the NSUI.

Pratim Ghoshal, who leads the DSF, told The Telegraph: "The ABVP tried to make JNU the first constituency to vote in the 2019 Lok Sabha elections. Three former chief ministers campaigned. Money and muscle were used, and they tried to interfere with the neutrality of the election committee. In the end, JNU prevailed. We have won the first battle for 2019."