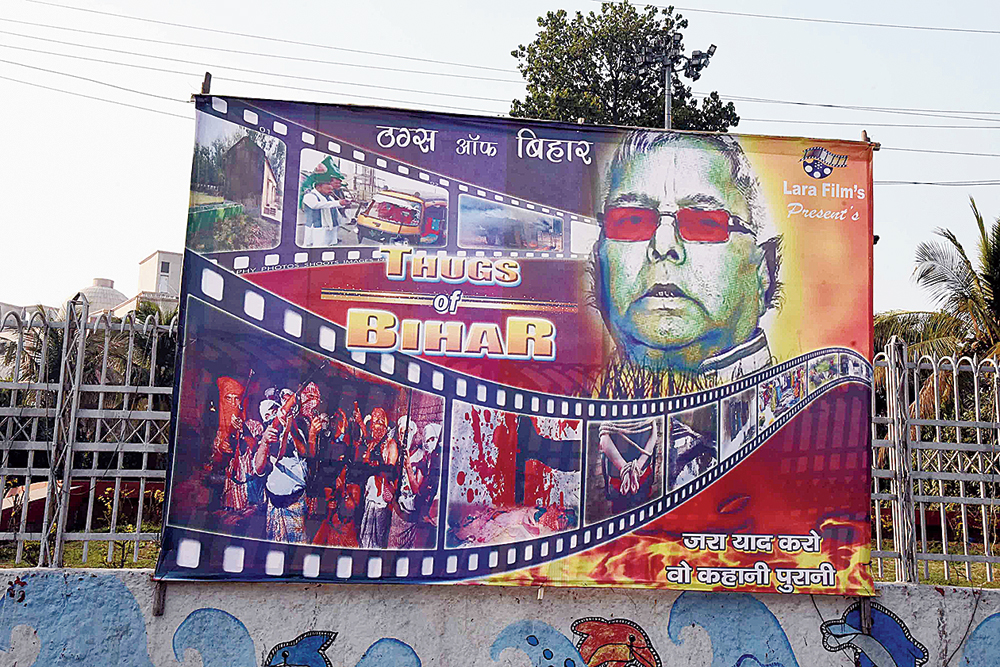 A poster war has broken out between chief minister Nitish Kumar’s Janata Dal United and Lalu Prasad’s Rashtriya Janata Dal, both unleashing their creative ingenuity to attack the other, as the electoral focus shifted from Delhi to Bihar where polls are due in October.

It was hard to miss the similarity with the release posters for Thugs of Hindostan, the 2018 movie that featured Bollywood superstars Amitabh Bachchan and Aamir Khan.

The posters, in both Hindi and English, came a day after the RJD targeted Nitish with two posters. One had the slogan “Do hazaar bees, Nitish Kumar finish” (Nitish will be finished in 2020), while the other showed Bihar bleeding from an injury inflicted by an arrow, the JDU’s election symbol.

The JDU posters, strategically placed at important locations in state capital Patna, showed an unwound film reel with each slide showing cases of vandalism, loot, kidnapping, murder and other crimes with the tagline “zara yaad karo wo kahani purani” (remember that old story).

It appeared to be a throwback to the 1990-2005 era, when Lalu Prasad and his wife Rabri Devi ruled the state.

The posters have the words “Lara Films presents” — a popular coinage that combines the first two letters of the names of Lalu and Rabri.

The RJD’s first family also had a stake in multiple firms beginning with the name “Lara” and engaged in social and commercial activities.

Asked about the posters, information and public relations minister Neeraj Kumar refused to reveal the identities of those behind the posters but said “the things portrayed in them are true about the 15-year rule of Lalu and Rabri”. “They made people remember those fear-filled, corruption-laden days,” Neeraj said.

The JDU had challenged Lalu Prasad and his RJD to a debate over development during their tenure compared with progress under Nitish’s rule since 2005, Neeraj said, adding they had skirted the issue.

“The RJD and its leaders fled at the very name of development. Our challenge still holds. They should provide a white paper on how their ancestral villages progressed, how many hospitals, schools, colleges, electricity connections, drinking water supply schemes, roads, drains and other such development works were constructed or implemented during their rule. We will do the same and leave it to the public to compare the two reigns,” Neeraj said.

Lalu Prasad, jailed after being convicted in multiple fodder scam cases, is now under treatment at the Rajendra Institute of Medical Sciences in Ranchi. 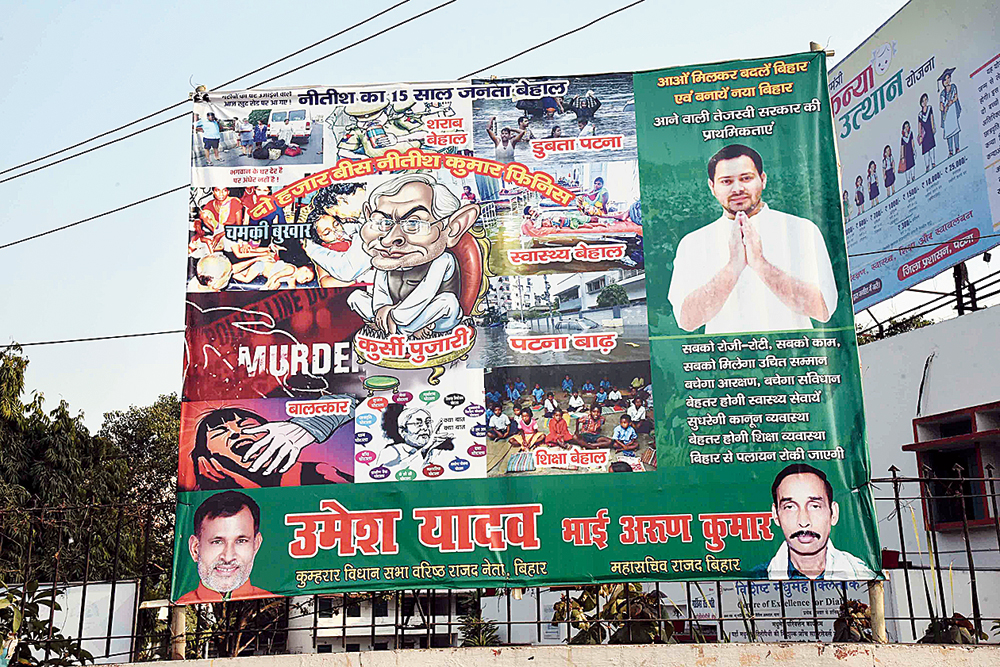 An RJD poster attacking Nitish Kumar put up in Patna on Tuesday
Picture by Ashok Sinha
The RJD’s reply to Wednesday’s posters came fast, that too on Lalu Prasad’s Twitter handle, which his family members maintain.

It showed Nitish bowing before a picture of Deendayal Upadhyaya while inaugurating a statue of the RSS-Jana Sangh ideologue in Patna on Tuesday.

It ridiculed Nitish’s socialist credentials with a parody based on the 1990s’ hit number: “Tere dar par sanam chale aaye, tu na aaya to hum chale aaye… le ke sangh mukta bharat ka bharam chale aaye… (You did not come my beloved, so I came to your doorstep… I brought the delusion of an India without RSS with me…).”

Nitish had broken away from the National Democratic Alliance in 2013. He was part of the Grand Alliance with the RJD and the Congress that trounced the NDA in the 2015 Bihar polls and ruled the state till July 2017, before switching back to the NDA.

In the four years when he was not part of the NDA, Nitish would often talk about working towards a country free of the RSS.

Sources in the RJD said they were planning to hit back at the JDU with a new poster.