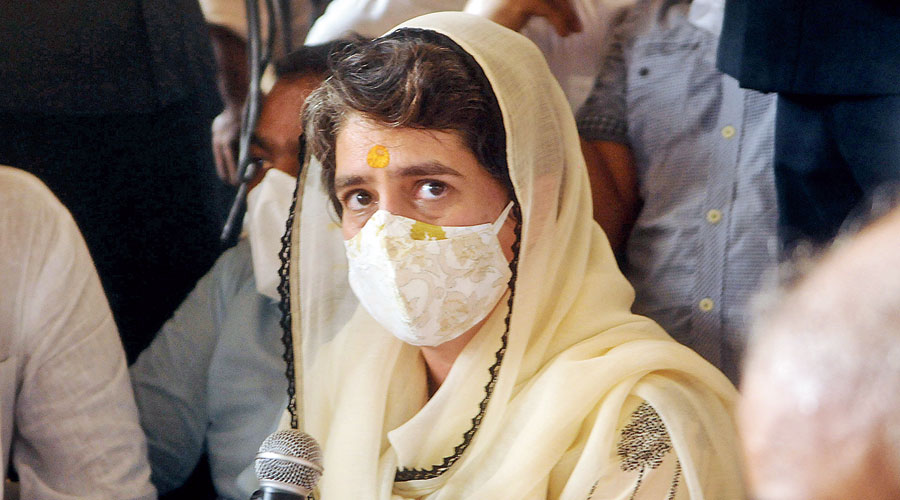 Priyanka Gandhi Vadra has intensified her attack on Prime Minister Narendra Modi and demanded his resignation.

“The Prime Minster should take moral responsibility for the incident of Lakhimpur Kheri and resign,” the Congress general secretary told reporters in Bahraich on Thursday, where she had gone to meet the family members of Gurvindar Singh and Daljeet Singh, two farmers who were among those crushed to death in Lakhimpur Kheri on Sunday.

“How can we expect a fair inquiry when a home minister and his son are behind the crime? The minister who is in charge of law and order in the country is father of the killer,” Priyanka added.

She also expressed her dissatisfaction with a judicial probe into the incident by a retired judge and said: “This is not going to serve the purpose. We are demanding a probe by a sitting judge of the high court.”

Priyanka first went to the home of Gurvindar Singh at Mohrania village in Nanpara.

“I had met the families of three victims in Lakhimpur Kheri on Wednesday and I’m meeting two in Bahraich today. They all have said clearly that they don’t care about financial compensation. They want the arrest of the culprits and suspension of the minister.

“It seems that Narendra Modi is trying to give a message to the people of the country that those in the government, the ministers and the Bharatiya Janata Party leaders can do anything against the common man, the farmers, the Dalits, the women,” she said after meeting Gurvindar’s family.

Puran Singh, Gurvindar’s cousin, said: “We showed Priyanka some videos and she was convinced that the minister’s son killed my brother, other farmers and a journalist. The killers are roaming freely because their leader is a central minister in the Modi government.”

Priyanka offered prayer at Mari Mata Mandir, a temple of goddess Durga in Lucknow, on Thursday morning before leaving for Bahraich.

Earlier, she tweeted in Hindi: “We will fight for justice till the end, till conclusion. All the victims’ families have said they will get justice when the Union minister would be suspended and the killers were arrested.”

Meanwhile, Navjot Singh Sidhu, president of Punjab Congress Committee, was detained by the police in Saharanpur while he was on his way to Bahraich along with hundreds of his supporters to join Priyanka. Former Uttarakhand chief minister Harish Rawat, who was headed to Lakhimpur Kheri with dozens of supporters, was detained in Bareilly.

However, Samajwadi Party president Akhilesh Yadav and Bahujan Samaj Party general secretary Satish Chandra Mishra met the families of three victims in Lakhimpur Kheri as they had reached there in a group of five. The government has imposed a preventive order and is not allowing the assembly of more than five people.

A large number of Congressmen gathered at the gate of Raj Bhavan, demanding audience from the governor and returned after an hour when Anandiben Patel received their memorandum, which registered their protest against the arrest of Priyanka in Sitapur for three days from Monday. She was allowed to proceed towards Lakhimpur Kheri on Wednesday.