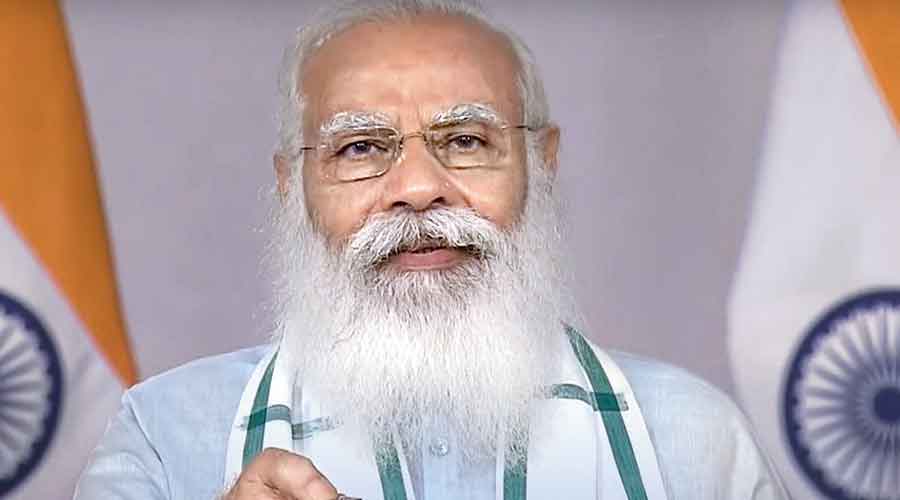 Kendriya Vidyalaya Sangathan (KVS) authorities have asked their schools in at least two regions to get their Class XII students to tweet video messages under the hashtag “Thank You Modi Sir” for cancelling their board exams, several principals and teachers have said.

A number of academics said the move would have undermined the dignity of the schools and the teachers, who had to pass on the diktat to the students, and amounted to schoolchildren being used for political propaganda.

A senior official at a private school in Delhi said this was an attempt to burnish Modi’s image amid the criticism over the mismanagement of the Covid crisis.

When the Nazis ruled Germany, the ministry of public enlightenment and propaganda had exercised control over schools, too.

While the nudge from the KVS came “unofficially” in a WhatsApp message, several teachers emphasised that the schools had no choice but to obey.

The principals of the 51 Kendriya Vidyalayas in the Bangalore region — which covers the whole of Karnataka — received the WhatsApp message on Thursday from the deputy commissioner for the region, Sirimala Sambana.

“All principal (sic) Bangalore region. Please send at least 5 videos of hashtag/ retweet by your students ‘Thank You Modi Sir’ by 4pm today (Thursday) for onward transmission to… hq,” the message attributed to “DC Bangalore” said.

“Please share among teacher/ students, if not shared immediately, and get at least 5 videos,” the message added.

A principal and two teachers independently confirmed that they had received the message. A June 1 meeting chaired by Modi had scrapped the CBSE Class XII exams.

A KVS official said a similar message had been sent to the principals of the Ernakulam region, which covers Kerala and has 39 Kendriya Vidyalayas.

A video message from a student in Kerala under the hashtag “Thank You Modi Sir” said: “I… wish to express my sincere gratitude to our honourable Prime Minister Shri Narendra Modi for relieving lakhs of students from the entire country from the uncertainty regarding the Class XII board examinations 2021. Covid 19 has definitely disturbed many families and lakhs of students have gone through harrowing times. This decision of our honourable Prime Minister has definitely come as a healing touch to the entire student community. Thank you, Sir, and a big salute to you.”

The KVS official said the Union education ministry had unofficially prodded the KVS to get its students to post such tweets. The central government-funded KVS has 25 regions and runs over 1,200 schools in the country and three abroad.

An email this newspaper sent to the education ministry on Friday, and another to KVS Commissioner Nidhi Pandey on Saturday, have brought no response. Calls from this newspaper to Sambana went unanswered.

Several Bangalore principals passed on the “DC’s” message to the class teachers immediately, sources said. The teachers put out the message in their students’ official WhatsApp groups, which have the class teacher as the administrator.

“Many teachers also phoned the students and asked them to post the tweet,” a teacher at a Bangalore Kendriya Vidyala said.

The teacher said: “The students follow whatever their class teacher says without any questioning. They began tweeting and the screenshots of the tweets were forwarded by the schools to the KVS regional office for further transmission.”

While Sambana’s message spoke of “at least five videos”, the schools asked every Class XII student to tweet a written message or a video, sources said.

Each section of a class at a Kendriya Vidyalaya tends to have about 40 students. Assuming a school has two sections per class on an average, some 4,000 students from the 51 schools in the Bangalore region would have been expected by their teachers and principals to post the tweets thanking Modi.

Educationist Anita Rampal, former dean of Delhi University’s faculty of education, said: “It’s unfortunate that the autonomy of institutions and teachers and their dignity is being undermined to the point of making them sycophants of politicians.”

She added: “What will the students learn from this? One wonders what respect they will carry for their institutions and leaders.”

The senior official from the Delhi private school said the Class XII exams would have had to be cancelled anyway because of the Covid situation, and that the Twitter campaign was just an attempt to build hype around Modi.

“There was no other choice but to cancel the exam. The board should have taken this decision earlier,” the official said.

“But now the government is using social media platforms to manufacture popularity for the Prime Minister, who has been facing criticism over his handling of the Covid crisis.”

A Kendriya Vidyalaya principal in Bangalore said that over the past few years, the KVS had been sending official communications to the schools asking students to participate in government programmes such as Swachh Bharat.

Another such programme is the Pariksha Pe Charcha, an interactive session the Prime Minister holds with students annually to discuss exam stress. This year’s programme was held online in April.

“As a government employee, you have very little choice, frankly,” the principal said.

An academic in Delhi who did not wish to be quoted said the latest KVS move reflected an attempt to please the Prime Minister.

“The education minister and other ministers are busy tweeting more and more because the Prime Minister follows Twitter. This is being done to please the Prime Minister. The autonomous institutions are being brought into this too,” the academic said.

Last year, the education ministry --- then known as the ministry of human resource development (MHRD) --- had asked each IIT to prepare a presentation on its Covid-related research.

Saying that HRD minister Ramesh Pokhriyal would post a tweet on the basis of the presentations, the ministry verbally suggested that all the IIT teachers re-tweet it. This was officially communicated by the IIT Bhubaneswar PRO to institute staff.

“The MHRD wants maximum momentum to HRD minister’s tweets and has asked that from our institute end, all the deans, heads of schools including all the faculty members and all students to re-tweet the same tweet from their individual Twitter handles,” the email from PRO Shalin Sasidharan Nair said.

However, the communication was withdrawn after sometime. In another email, the PRO said the first mail had been erroneously sent to all the teachers although he intended to discuss the matter only with the deans of student affairs and faculty planning.