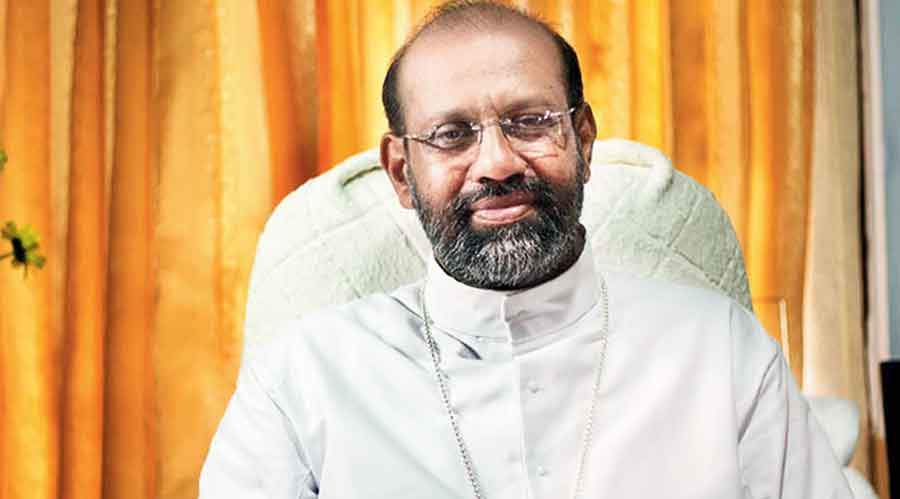 Conciliatory efforts by leaders of two minority communities have led to the removal of objectionable content against Muslims from a catechism textbook published by a Kerala Christian diocese and provided a possible template on easing the tensions fuelled by a statement from a Catholic bishop.

M.K. Muneer, the Indian Union Muslim League MLA from Koduvally in Kozhikode, led a delegation of community leaders to meet Bishop Remigiose Inchananiyil and his clergymen from the Diocese of Thamarassery in the district late on Friday evening over the controversial catechism textbook for Classes X to XII.

What followed was an immediate agreement to remove the content that showed Muslims in poor light and an expression of regret.

Bishop Inchananiyil issued a media statement announcing the withdrawal of the controversial contents within minutes of the meeting that started around 7pm, an Islamic scholar who was part of the discussion said.

“Bishop Remigiose Inchananiyil informed about the withdrawal of a portion related to Islam in the book, titled Truth and Realities in 33 Questions and Answers, at a meeting held to discuss the matter. He expressed regret at hurting the religious sentiments of Muslims over some remarks in the book. The meeting held under the chairmanship of Koduvally MLA M.K. Muneer decided to work for communal harmony and against social ills,” the statement in Malayalam said.

Dr Hussain Madavoor, the Islamic scholar, told The Telegraph on Saturday: “It seemed the bishop had already decided to remove the hurtful contents since he immediately agreed to our objections, apologised for the lapse and said the book had been printed without his knowledge.”

The smooth reconciliation had shown that communal harmony could be strengthened through dialogue, cooperation and mutual respect as secularism was the “prime driver” of Kerala’s society, Church officials said.

The row over the catechism textbook had erupted a few days after Bishop Mar Joseph Kallarangatt of the Pala Diocese in Kottayam had told Christians to protect their children from “love jihad” and “narcotic jihad”.

The choice of the phrases was seen as a deafening dog whistle targeting Muslims although the bishop’s supporters sought to claim that he was addressing his flock and his objective was to caution families against the drug menace among the youths.

The subsequent exchanges in the public domain saw tensions rising between sections of Christians and Muslims like never before in a state where the minorities together account for around 45 per cent of the population and wield considerable political and economical influence.

The balance is so delicately poised that even the usually assertive CPM-led government faced charges of walking the tightrope, unwilling as it was to antagonise any group by taking stringent action. CPM sympathisers have sought to defend party and government by saying that sagacity and restraint, not accusations that can drive the situation out of control, should be the immediate priority.

The BJP, which has been unable to break out of its marginal role in state politics in spite of repeated attempts, has been accused of fishing in troubled waters by supporting the bishop and hoping to pit Christians against Muslims.

Madavoor urged the state government to grab the initiative after the success of the conciliatory meeting in Kozhikode and call an all-party meeting involving religious leaders from both communities.

“All parties (barring the BJP) have objected to the bishop’s (Kallarangatt’s) comments. We now need the government to organise a meeting so that this controversy can be buried forever,” Madavoor said.

He suggested that Muslim leaders could meet the Pala bishop without harping on his inflammatory remarks. “We will not utter a word about what has already been said. The bishop could say he had referred only to extremists in our community. That should be sufficient to end this issue.”

Madavoor said the Muslim delegation in Kozhikode had also offered to work with the Church to protect youths from drug abuse.

While the Left government had on Thursday sent cooperation minister V.N. Vasavan to meet Kallarangatt, it was the Opposition Congress that has been playing the lead role of trouble-shooter. The Congress’s Kerala president, K. Sudhakaran, had met the bishop on Thursday after he and leader of the Opposition V.D. Satheesan met Changanassery Diocese Archbishop Mar Joseph Perumthottam, who had backed Kallarangatt.

The Major Archbishop-Catholicos of the Syro-Malankara Catholic Church, Baselios Cardinal Cleemis, has called for extra attention to maintain communal harmony in Kerala.

“This is a time when we need to give a lot of attention, love and care to the relationship between Christians, Hindus and Muslims in Kerala,” he told Sathyadeepam, a Malayalam weekly published by the Angamaly-Ernakulam Archdiocese of the Syro-Malabar Church to which Kallarangatt belongs.

“We have been able to maintain this friendship for years in Kerala. But we do see cracks in the relationship between communities…. So if you ask whether communal amity has suffered, the blunt answer is ‘yes’,” said the Cardinal, who suggested that the solution was to “strengthen our mutual love, respect and cooperation”.

Shyju Antony, spokesperson for the Almaya Munnetam (Laity Movement), an influential Christian group, called for an immediate dialogue between the faiths. “The state government should take the initiative and start an inter-faith dialogue to end this issue, which is fuelled only by rumours and unsubstantiated claims.”

He added: “The mental distance will only grow if the two communities don’t talk. Cardinal Cleemis has clearly sought a dialogue to restore the cordial relationship and brotherhood between all communities.”

Antony noted that in a state with over 100 bishops, around 60 were from Kallarangatt’s Syro-Malabar Church, but only a couple of them had supported him. “This shows that the Church is not with him since secularism is the prime driver of Kerala’s society. So all it takes is a heart-to-heart discussion to solve this issue,” Antony added.