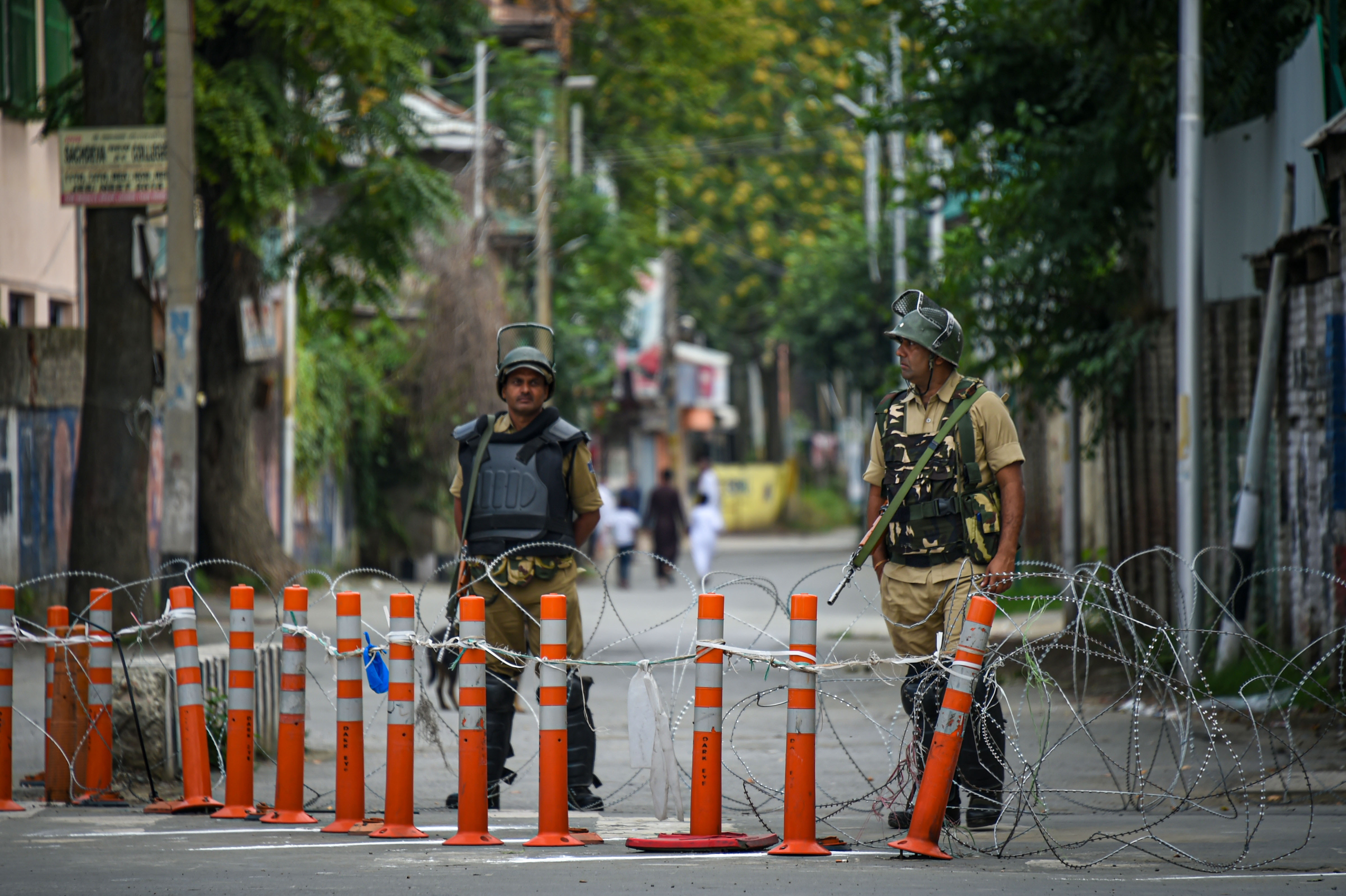 A team of Jean Dreze and and three political and social activists who were in Jammu and Kashmir from August 9-13 today told a news conference in Delhi that they had heard of children being taken away by security forces after the lockdown started on August 5.

This website is quoting the team members as they are believed to be among the earliest witnesses of the Kashmir shutdown who managed to return and report their findings. The website will carry denials or corroborations as an when they are made.

The team did not give any figures on any of their findings as its mission seemed to have been to put together as detailed an eyewitness account possible. Also, it is never easy to gather figures on any state-backed military action in any part of the world as flow of information is also controlled by the state at such junctures.

One of the team members, Maimoona Abbas Mollah of the All India Democratic Women’s Association (AIDWA), also released the group's statement on Facebook that listed the team's observations. The team - Dreze, Mollah, All India Progressive Women's Association (AIPWA) member Kavita Krishnan and Vimal Bhai of the National Alliance of People’s Movement’s - shared some videos with journalists too. They were barred from showing the videos and photographs to assembled journalists at the Press Club.

While the lockdown in Kashmir - officials said today that restrictions had been lifted in Jammu - is common knowledge by now, the four gave a view of the absoluteness of the state's action.

“Boys as young as 10-11 years, or even younger, were picked up from their homes or roads in the middle of the night. They are not even stone throwers. They have just been picked up and kept in police stations or army camps,” Krishnan said. Their parents are scared because there is no case against them and Kashmir has a history of disappearances in the region, she added.

Vimal spoke about a conversation with an 11-year-old boy in Pampore on the day of Id, August 12. The boy, according to Mollah's release, was picked up by the police on August 5 and was in custody till August 11. During a video-recorded conversation with the boy, the team found out that he was picked up when he had gone for prayers, tied up and beaten. “They said I was throwing stones. I said I wasn’t, but they insisted I had,” the boy said.

The statement mentioned that on August 6, a graphic designer of the Rising Kashmir newspaper, Samir Ahmad, had 'remonstrated' with a CRPF guard in Manderbag, Srinagar, to let an old man pass. 'Later the same day when Samir opened the door of his house, CRPF fired at him with a pellet gun, unprovoked. He got 172 pellets in his arms and face,' said the team's statement. By a stroke of luck, Samir's eyes were undamaged. 'It is clear that the pellet guns are deliberately aimed at the face and the eyes, and unarmed peaceful civilians standing at their own front doors can be targets,' the team wrote.

The statement also mentioned telling details of life in Kashmir. The team encountered children in a park play-acting, the team wrote. Some of them were saying 'Iblees Modi (Satan Modi)'.

In one of the videos shared by the team, some men were heard claiming that they weren’t allowed to offer prayers in the Eidgah in Pampore and even the loudspeakers (for prayers) were not allowed to be used.

In another video from Pampore, a man claimed that four boys were picked up by security forces and three were released after four days. But his 19-year-old son had not returned. “They told us that there isn’t any case against him but keep saying that they’ll release him in a day or two,” said the man in the video.

Krishnan said that barring a few ATMs, chemist shops and some hospitals, nothing else worked. All roads were closed, even on Id. “Much of the stuff being shown in electronic media in India has focused on a small enclave inside Srinagar,” she said.

Mollah recalled what home minister Amit Shah had said in Parliament when he was asked about Farooq Abdullah's alleged confinement in his home. He had said that he can't put a gun to Abdullah's “kanpatti” (temple) and bring him out of his house. “You have put a gun to entire Kashmir’s kanpatti. Military and paramilitary are standing at every corner of Kashmir… but fearless Kashmiri women there say that ‘we don’t need protection from the forces which picks our brothers and boys in the middle of the night',” she said at the news conference.

“There is a massive military and paramilitary presence in Kashmir, in more or less every street corner. The main purpose is to control the local population and to prevent any protest, however peaceful it may be,” Dreze said. As much as a candle-light vigil or standing in the middle of the road with a simple placard saying ‘Reinstate 370’, you’ll be packed off immediately and god knows what will happen after that.”

In their statement, the team said they heard 'zulm (oppression)', 'zyadti (excess)' and 'dhokha (betrayal)' over and over again from people about the government’s move.

The team quoted a man from Safakadal, saying: “The government has treated us, Kashmiris, like slaves, taking decisions about our lives and our future while we are captive. It’s like forcing something down our throats while keeping us bound and gagged, with a gun to our heads.”