Kashmir doctor speaks up, whisked away

Omar Salim, a urologist at the Government Medical College, held a placard that said he was making a 'request and not a protest' 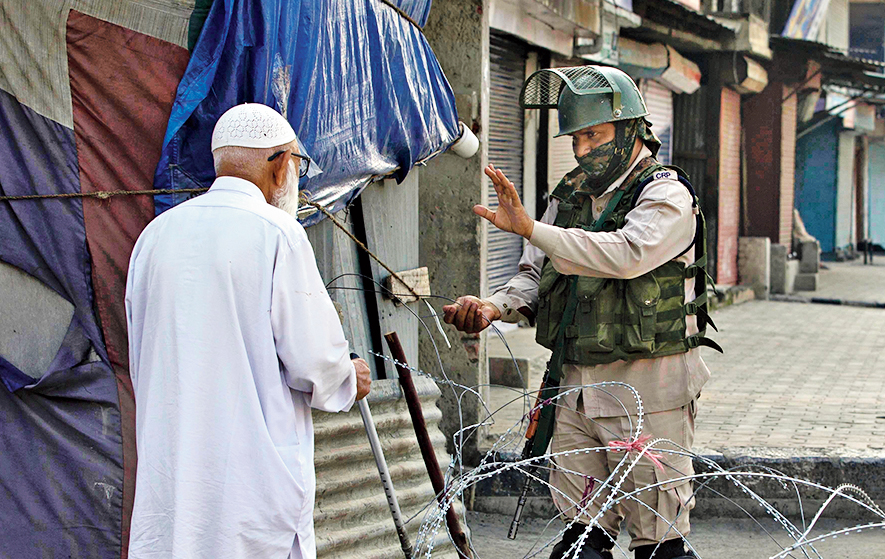 An elderly man is stopped before being allowed to pass a checkpoint set up by paramilitary soldiers in Srinagar on Friday.
(AP)
Muzaffar Raina   |   Srinagar   |   Published 26.08.19, 09:53 PM

A young doctor was whisked away by police minutes after he spoke out about the health crisis facing Kashmir because of the three-week-old government clampdown.

Omar Salim, a urologist at the Government Medical College, had appeared at Srinagar’s press enclave to speak to the media, wearing a doctor’s apron. He held a placard that said he was making a “request and not a protest”.

He had barely spoken for 10 minutes when the police arrived and whisked him away to an unknown location, making it clear the authorities would not tolerate any questioning of their actions.

Efforts to find out where the doctor had been taken were thwarted by the information blockade. Government spokesperson Rohit Kansal, the only official interface between the government and journalists, skipped the evening media briefing the second day running.

Omar had said the information blockade and the travel curbs were endangering the lives of patients, particularly those who needed dialysis or chemotherapy.

He said he did not know whether the restrictions had caused any deaths but he did know patients who had had to postpone their treatment.

“Another patient whose chemotherapy drug has to be obtained from Delhi was unable to place an order for the drug. His chemotherapy has been postponed indefinitely.”

Omar added: “There are patients who require three dialysis sessions every week but are coming only once a week. There are patients registered under insurance schemes who have to pay out of their own pockets (for every dialysis) costing Rs 1,500 to Rs 1,800. It’s not a small sum for someone earning less than Rs 10,000.”

Omar said many patients are unable to make it to hospitals or to buy medicines because of the cash crunch at the banks.

“Most important, we have 15 lakh patients registered under the Ayushman Bharat scheme. We are the number one state in India in terms of the scheme’s penetration. None of the beneficiaries are able to come and claim the benefits because there is no Internet and the card system is defunct,” he said.

“(People registered with) many other health insurance schemes, like those for textile industry labourers, cannot claim the benefit because of the lack of access.”

Omar urged the government to restore the landline connections at all the hospitals and clinical establishments to avoid “disadvantage to the patients”.

Omar had in the past, too, spoken out against government curbs. He had bicycled 65km to his hospital this year in protest against the ban on civilian motor vehicles using the highway after the February 14 Pulwama massacre.

The government has repeatedly claimed there are no restrictions on emergency patients.