Slushy water is eroding underground rock, accelerating the subsidence in parts of the town, geologist Piyoosh Rautela tells The Telegraph 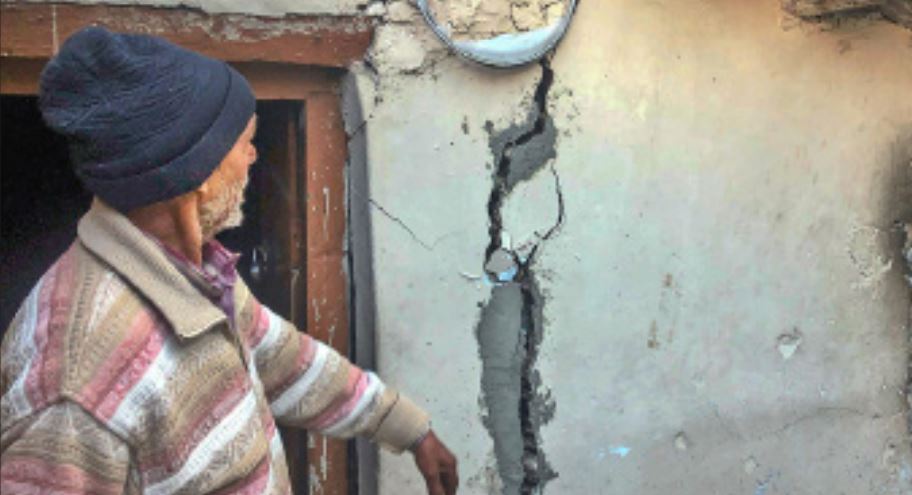 Piyoosh Rautela, a professional geologist, has scrambled over the past week to manage a crisis in Joshimath he had warned about 12 years ago — a spike in the central Himalayan town’s sinking rate triggered by the sudden release of underground water.

The water discharge from a burst aquifer — a water-bearing subterranean rock — that started on the night of January 2-3 has resulted in cracks in houses and other structures in parts of Joshimath, said Rautela, executive director with Uttarakhand’s Disaster Management Authority.

“The aquifer is releasing water, 400 to 500 litres per minute. The slushy water is eroding underground rock, accelerating the subsidence in parts of the town,” Rautela told The Telegraph on Sunday.

“The extent of the aquifer, the volume of water it contains, and why it burst are unclear for now. We’ll need detailed studies to answer these questions.”

State and central authorities have begun evacuating affected people and providing them with food and shelter, and have sought guidance from geologists and other experts on short-term and longterm remedial measures.

The Prime Minister’s Office said on Sunday that Prime Minister Narendra Modi was concerned and had reviewed the situation with the Uttarakhand chief minister.

P.K. Mishra, principal secretary to the Prime Minister, held a review meeting on Sunday with other senior central and state government officials as well as scientists from the Wadia Institute of Himalayan Geology, Dehradun, and other institutions to discuss the damage and land subsidence.

Officials have determined that a strip of land with a width of about 350 metres has been affected. The principal secretary has asked experts from research institutions to undertake an interdisciplinary investigation in the affected area and develop a risk-sensitive plan for Joshimath, the PMO said in a media release.

Preliminary investigations have prompted geologists to attribute the cracks to accelerated sinking in parts of the town, triggered by the sudden discharge of the aquifer’s water since the night of January 2-3. But it is a crisis scientists had predicted decades ago.

“It is not one thing that has caused this. Multiple factors have contributed to this,” said Rautela, who had cautioned in a scientific journal in May 2010 that Joshimath “has been showing signs of distress due to burgeoning anthropogenic (human-linked) pressure”.

Rautela had flagged concerns about Joshimath showing signs of continuous ground subsidence and cautioned that any sudden outpouring of water from an aquifer or largescale dewatering of subterranean rock layers could worsen the ground subsidence.

Concerns about subsidence in Joshimath date back for decades. A scientific panel had in 1976 underscored that Joshimath is situated “on an old landslide zone and is sinking” and recommended that heavy construction be banned in the area.

“What we’re seeing today is the effect of years of unplanned development and haphazard construction on an unstable, vulnerable site,” said Mallika Bhanot, a volunteer with Ganga Avahan, a citizens’ forum in Uttarakhand that has been campaigning for responsible development.

“This area has complex hydrogeology, which has long been ignored. Now, water is oozing from different corners of the town with little understanding of the cause,” she told this newspaper. “A thorough, unbiased investigation is needed.”

Construction, much of it driven by a growing population and tourism, has taken place in and around the town for years, two state geologists said. Joshimath is a key halt town on the route to Badrinath.

“A major concern has been the lack of adequate drainage systems in the town,” said Sushil Khanduri, a geologist with the Uttarakhand Disaster Management and Mitigation Centre, Dehradun. “This causes much of the natural water and household water to infiltrate the ground.”

A team of state geologists had visited towns around Joshimath in August 2022 and noticed signs of trouble — similar cracks in specific locations named Sema, Sunil and Ravigram. The team had turned in its report in September, recommending counter-measures including steps to enhance the drainage facilities and control erosion along segments of the Alaknanda river, north of the town.

But, for the currently affected houses in Joshimath, the recommendations came too late.