Advertisement
Home / India / Jobless with a job in Delhi

Jobless with a job in Delhi 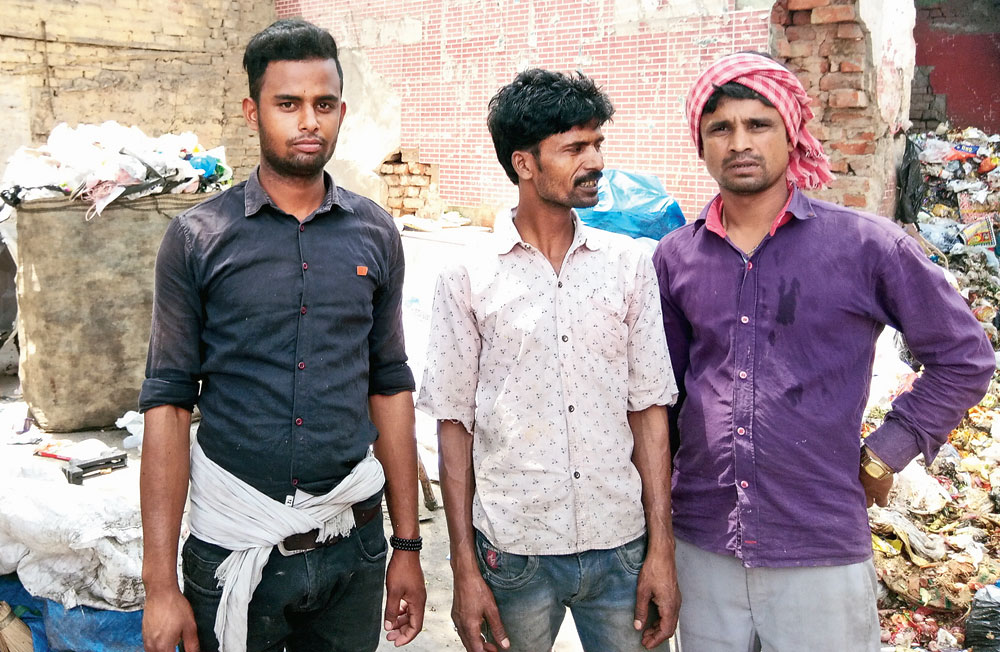 Salim (centre), a sanitation worker in Delhi. The bag of plastic material he segregated from the garbage is visible at the back
Picture by Basant Kumar Mohanty
Basant Kumar Mohanty   |   New Delhi   |   Published 14.05.19, 11:58 PM

By 11am last Wednesday, Salim had collected all the household trash littering the lanes in the central Delhi neighbourhood of Regar Pura and dumped it in the local garbage yard.

If he were a regular civic employee, his day’s work would be over. But Salim said his “actual work” would only start now: he would be segregating the plastic bags and bottles and liquor bottles from the rest of the rubbish.

“I’m not a direct employee of the Municipal Corporation of Delhi; I have been appointed by a contractor,” Salim, working without any gloves or mask, said.

“I get paid after every three months. So I collect the plastic waste and sell it for a living.”

A regular sanitation employee of the municipality earns about Rs 40,000 a month, has medical insurance and receives pension after retirement. A contractual sanitation worker hired by the civic body itself is paid about Rs 15,000 a month and gets pension but no health cover.

Salim, a sub-contractual worker, is paid only about Rs 18,000 every three months. He earns about Rs 200 a day by selling plastic waste, thus doubling his income.

He will receive no pension; and neither the civic body nor the contractor has taken out a medical insurance policy on him.

Although Salim ostensibly has a “job”, he is as much a victim of the unemployment crisis afflicting the country as a jobless youth, say economists Ravi Srivastava and Anoop Satpathy.

The lack of jobs is forcing the poor to seek what economists call “non-standard forms of employment” with sub-contractors, at wages below the official minimum wage and minus any social security.

These workers labour more than eight hours without a break, and without overtime pay or safety measures, said Satpathy, a Fellow at the V.V. Giri National Labour Institute, a think-tank on labour issues. They have no collective bargaining power, which accrues only to the labour unions in the formal sector.

A study by Srivastava, a professor with Jawaharlal Nehru University, on “Structural change and non-standard forms of employment in India” has shown that the growing unemployment rate has expanded the ranks of workers like Salim.

Srivastava cited the reported finding of the Periodic Labour Force Survey (PLFS) 2017-18, which the government has refrained from publishing but whose contents got leaked to the media, that the national unemployment rate has touched 6.1 per cent, the highest since 1972-73.

He said the India Human Development report covering the period 2004-05 to 2011-12, published by the National Council of Applied Economic Research, has estimated that the country has 2.1 crore seasonal migrant workers, most of whom end up working under labour contractors.

“The situation on the ground is the outcome of reduced employment, which has been declining since 2012-13,” Srivastava said.

Therefore, the workers are forced to accept work that denies them social security and even the minimum wage.

Prakash Chandra, who was a security guard with a private company at Ballabhgarh in Haryana till recently, said the big manufacturing units in the industrial area employed most of their workers through labour contractors.

“The Haryana government has fixed Rs 8,100 as the minimum monthly wage for industrial workers, but the labourers are paid much less. The contractor takes a share of each of the workers’ wages. This exploitation must stop,” Chandra said.

He said the minimum wage for an industrial worker should be Rs 500 a day, and he should be entitled to overtime pay, leave and a house allowance, as well as breakfast and tea breaks.

“The employers pay the minimum wage package, and the labour contractor takes his cut. This has created tension — it’s a pressure-cooker situation in most industrial workplaces,” Srivastava said.

Satpathy said the job “is not a recent phenomenon but is visible for quite a long time”.

Satpathy headed a committee set up by the Union labour and employment ministry to suggest a minimum wage for workers across the country. The committee handed in its report in February, suggesting a minimum daily wage of Rs 375, going by the July 2018 price index.

It also suggested an alternative region-wise rate varying between Rs 342 and Rs 447, based on the July 2018 price index. The government has not taken any decision on the report yet.

If either of the suggestions is accepted, almost all the states will have to raise their wage rates.

A labour ministry official said the report was being examined. The government has introduced a wage code bill to provide a minimum all-India, floor-level wage rate that would be binding on the states.