Aishe Ghosh, president of the students’ union that had organised the screening, accused the university administration of deliberately disconnecting power to the campus to disrupt the event 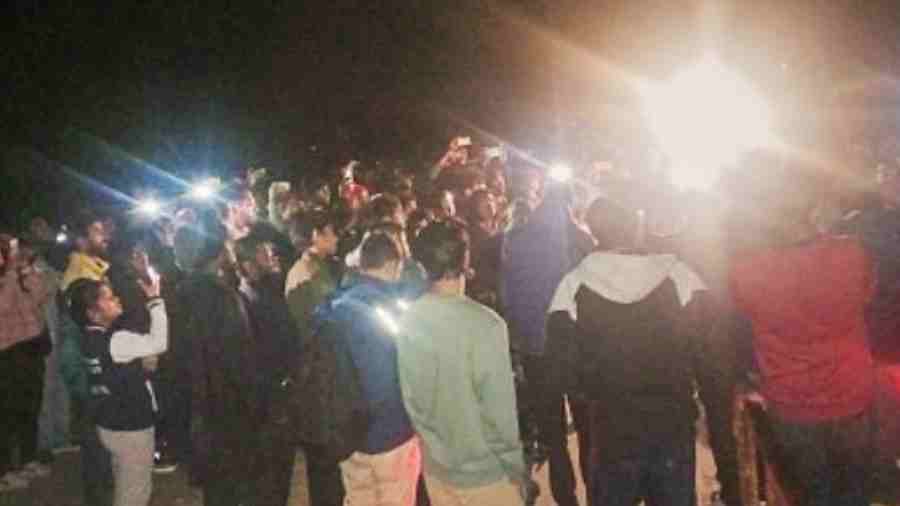 Students stand outside the JNUSU office in New Delhi on Tuesday, alleging that the JNU administration cut off the electricity supply to prevent the screening of the BBC documentary, India: The Modi Question.
PTI picture
Basant Kumar Mohanty   |   New Delhi   |   Published 25.01.23, 03:30 AM

About 300 JNU students defied the university administration on Tuesday evening and gathered for a public screening of the BBC documentary, India: The Modi Question, but a power cut forced them to watch it on their mobile phones.

Aishe Ghosh, president of the students’ union that had organised the screening, accused the university administration of deliberately disconnecting power to the campus to disrupt the event.

Students had gathered outside the union office and were about to go in for the 9pm screening when the lights went out at 8.45pm. Students said the power cut was restricted to the campus and did not affect the neighbourhood.

Ghosh asked the gathered students to scan a QR code on their mobiles to watch the film. They did so together in an open space outside the union office. A laptop was also brought in to show the documentary.

Most started watching the film around 9.40-45pm. At about 10.30pm, a hail of stones flew in towards them from the darkness around. A few students suffered grazes. Left student groups blamed the ABVP, which denied the charge.

The students then walked to the main gate, where there was light from the streets, to protect themselves.

The JNU administration had on Monday issued a notice denying permission for the screening and threatening action against students who attended it.

The Centre had asked YouTube and Twitter to block links to the film, which looks into Narendra Modi’s role as Gujarat chief minister during the 2002 riots.

“The documentary is not banned. But the governmentis scared of the documentary being screened because its hows the truth. The administration has cut off electricity. You may turn out the light but you cannot dampen our spirit,” Ghosh said.

She said BJP leaders often issue threats to harm minorities, and the film had shown exactly that.

“Supporting a British-constructed narrative is coherent with the colonial mindset of British sepoys, of which many in (the) Opposition as well as so-called student organisations are indeed British stooges, spreading a propaganda-driven BBC documentary in Indian educational institutions,” it said.

The documentary had been screened at the Central University of Hyderabad on Saturday, shortly after PTI reported the government directive to YouTube and Twitter.

The Fraternity Movement, which held the public screening, issued a statement on Tuesday saying it had done so in honour of the families of the riot victims who are still fighting for justice.

“It is not an entirely new revelation that the BBC documentary has made, but an affirmation of the already existing narrative which questions the claims of the then chief minister Narendra Modi and his government,” it said.

The statement condemned the reported government directive to block access to the documentary.

“It is common practice in UoH (University of Hyderabad) to conduct screenings and discussions in public spaces. The screening of the BBC documentary is not an anomaly, rather (it) contributes to the academic environment of questioning of the fascist forces. We believe in the necessity to cultivate the culture of dissent in campus spaces,” it said.

The statement said India was witnessing growing intolerance towards dissent, with any criticism of the central government projected as anti-national.