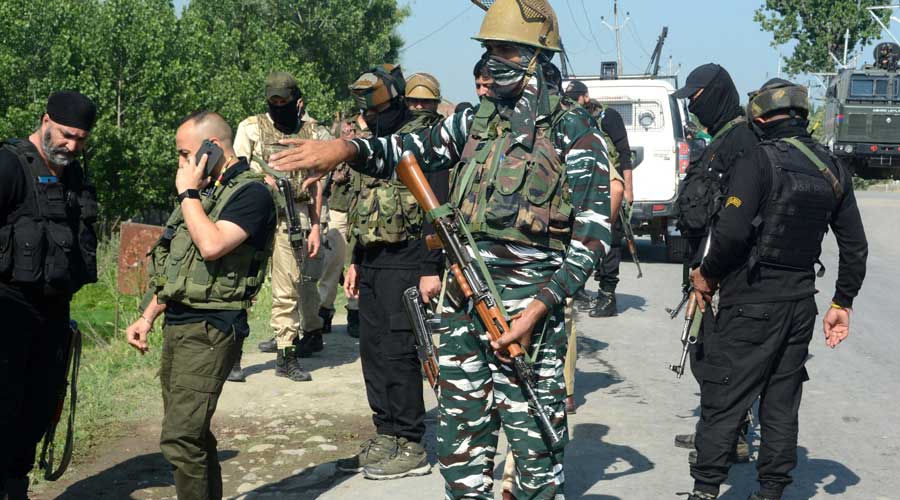 The report said there was sustained suppression of journalists and activists through the use of repressive legislation such as the sedition law and anti-terror laws
File picture
Muzaffar Raina   |   Srinagar   |   Published 09.08.22, 03:26 AM

Former bureaucrats, army officers and retired judges have questioned the government’s “all is well” and “normalcy” narrative on Kashmir, arguing civilian security has worsened while the sedition and anti-terror laws continue to be abused since the 2019 scrapping of Article 370 provisions.

The Forum for Human Rights in Jammu and Kashmir, led by former chief justice of Delhi High Court A.P. Shah, on Monday released a report, titled “Three years as a Union Territory: Human rights in J&K”, for the period August 2021-July 2022.

“After three years of lieutenant governor’s rule, civilian security has taken a new turn for the worse. The abuse of sedition and anti-terror laws such as the UAPA and PSA against activists and journalists continues,” the forum, which describes itself as an “informal group of concerned citizens”, said in its report.

The 52-page report said there had been no significant reduction in civilian killings in the last three years and that three groups of civilians were being targeted disproportionately— panchayat members, Kashmiri Pandits (or members of the minority Hindu community) and the Jammu and Kashmir police.

The report said there was sustained suppression of journalists and activists through the use of repressive legislation such as the sedition law and anti-terror laws — Unlawful Activities (Prevention) Act (UAPA) and the Personal Security Act (PSA) — claiming they are used to create a vicious cycle of criminal proceedings.

The report also highlighted the takeover of the Kashmir Press Club in January this year by a group of journalists and media professionals, escorted by security forces.

The report condemned the curbs on journalists travelling abroad as “shocking violations of their constitutional rights”. In July, two Kashmiri journalists, Sanna Irshad Mattoo and Aakash Hassan, were stopped by immigration authorities from leaving the country.

The forum called for the immediate release of journalists Aasif Sultan, under arrest since 2018, and Fahad Shah, who has completed six months in jail.