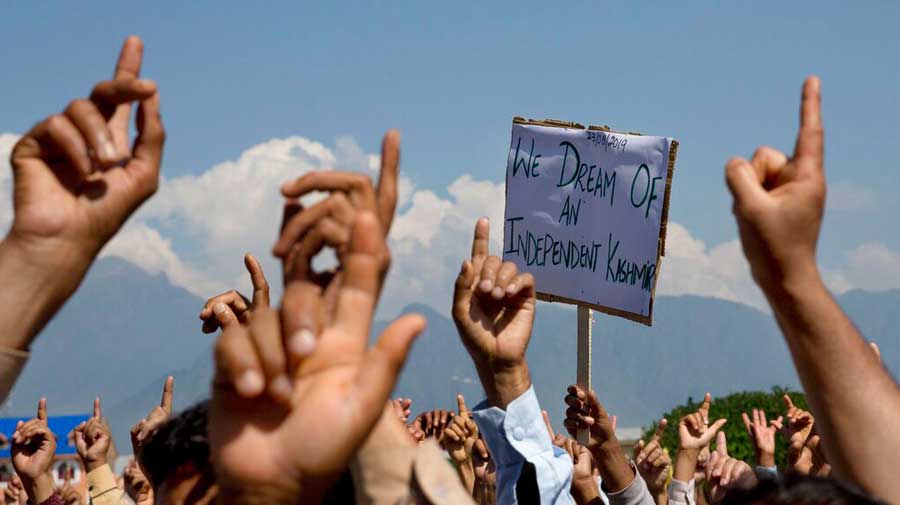 The People’s Alliance for Gupkar Declaration, which comprises major political parties of the UT including National Conference and People’s Democratic Party and is fighting for the restoration of Article 370, said all its constituents unanimously chose to contest.
File picture
Muzaffar Raina   |   Srinagar   |   Published 08.11.20, 02:23 AM

Jammu and Kashmir’s seven-party alliance on Saturday decided to unitedly contest the maiden District Development Council (DDC) elections in the Union Territory, partly shunning its two-year election boycott to prevent the BJP from capturing the political space in the region.

The People’s Alliance for Gupkar Declaration, which comprises major political parties of the UT including National Conference and People’s Democratic Party and is fighting for the restoration of Article 370, said all its constituents unanimously chose to contest.

“The PAGD has unanimously decided to fight the DDC elections unitedly. Despite the abruptness of the DDC elections in terms of timing, it is important that this sacred space in democracy is not allowed to be invaded n (and) marauded by divisive forces,” the alliance said in a statement issued after a meeting held in the Jammu region.

The alliance was floated recently but all its members had boycotted the local body elections in 2018 and 2019 in anticipation of the Centre’s plans to scrap J&K’s special status. The BJP, which had no presence in large parts of Jammu and Kashmir, took advantage of their absence and could win many seats, uncontested or with minimal participation.

The alliance has belied expectations of many in J&K who were expecting them to take a more hard-line position on elections as long as Article 370 and statehood is restored. Some even expected them to follow into the footsteps of Hurriyat by completely boycotting all elections.

“But that won’t be easy because that means helping the BJP capture all the space for electoral politics in Jammu and Kashmir. The parties unanimously decided to contest the elections,” a source said.

The UT will hold its first DDC polls from November 28 to December 22 in eight phases. In October, the central government amended The Jammu and Kashmir Panchayati Raj Act, 1989, to establish development councils in all its 20 districts.

Elections are also being held simultaneously in 228 vacant seats in urban local bodies and 13,241 panch and sarpanch seats that were left vacant as no candidates came forward to contest following the boycott by major parties.

PDP spokesman Firdous Tak said the alliance has not taken any decision on contesting Assembly or parliamentary elections.

“The decision will be taken on those elections when the time comes. We are only contesting DDC elections. So far as elections to leftover panchayats or municipal bodies are concerned, they are being contested on non-party basis,” Tak told The Telegraph.

“What makes this election is unique is that we will field joint candidates and won’t be contesting against each other. The candidates will be announced by (NC president) Farooq Abdullah sahib (who heads the alliance) in the coming days.”

A source said they expect a huge success which will “negate all the propaganda” of the BJP that people in J&K are happy with the abrogation of Article 370 and the changes in land and domicile laws.

The source said the alliance leadership has met delegations in Srinagar and in Jammu and the announcement was a result of the deliberations.

Apart from the NC and the PDP, other parties in the alliance include the CPM, the CPI, the J&K People’s Conference, the Awami National Conference and the People’s Movement.

The Congress was also part of last year’s Gupkar declaration which had vowed to fight proposed changes in J&K’s special status. The party has, however, not joined the alliance.

The participation is likely to deal a major blow to the BJP’s plans to make inroads in non-Hindu belts of the UT. Muslims form nearly 70 per cent of the population and many believe the abrogation of Article 370 is aimed at changing the Muslim-majority character of the region.

“Our participation does not in any way prove that we have diluted our stand for the restoration of the state’s special status. We do not want to give the BJP a free run and help its propaganda that its win was an approval of what they did on August 5 last year,” a source said.