Cops have arrested 21 persons so far 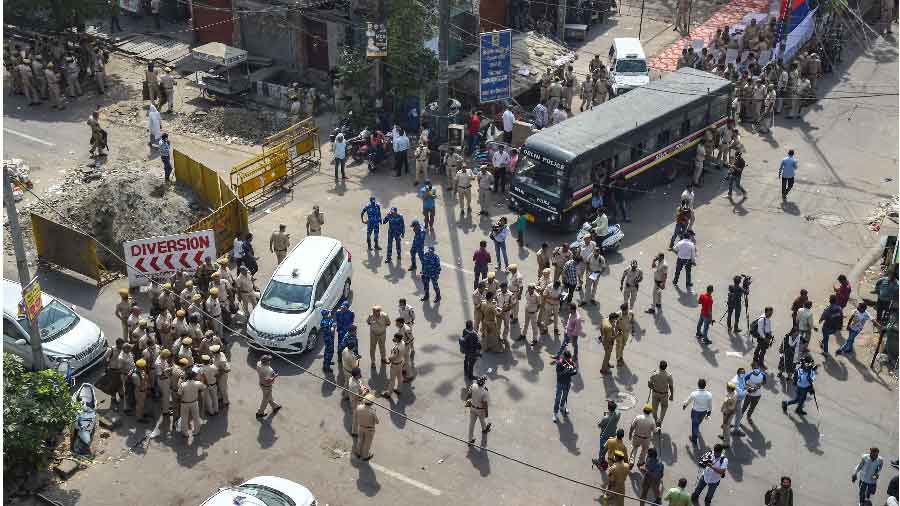 A day after clashes broke out during a Hanuman Jayanti procession in the city's Jahangirpuri area, the Delhi Police on Sunday held a meeting with members of local peace committees and asked them to appeal to the people to maintain calm, officials said.

Adarsh Nagar BJP councilor Garima Gupta claimed she tried to raise the issue of illegal Bangladeshi immigrants living in the area during the meeting, but was not allowed to do so.

"We were asked to participate in the meeting by the police. I said that the problem was due to Bangladeshis living illegally in the area and they also kept weapons. But the police officer in the meeting claimed that I was diverting the issue at hand," she said.

What is the purpose of calling such a meeting where "real issue" cannot be raised, Gupta asked.

There was stone-pelting and arson during the clashes between two communities that left eight police personnel and a local injured. Some vehicles were also torched, the police said.

According to ndtv.com, Delhi Police arrested 21 people over the violence.

One of the arrested is a 21-year-old man who allegedly fired a bullet that hit a sub-inspector, officials said on Sunday.

According to the police, Deputy Commissioner of Police (Northwest) Usha Rangnani called the meeting with members of the 'aman' (peace) committees of Jahangirpuri, Mahendra Park and Adarsh Nagar to maintain peace in the area. "During the meeting, all the members were asked to appeal to the public in their areas to maintain peace, harmony and tranquillity.

"They were assured of a professional and fair investigation and due legal action on the part of police," said Rangnani. The members of the 'aman' committees were also urged to counter any rumour, misinformation and asked to be vigilant towards the activities of mischievous or anti-social elements, the officer said.

They were also requested to keep in touch with the police and immediately report anything suspicious, the officer added.

The situation in Jahangirpuri was fully under control. Adequate police force has been deployed in the area. Area domination exercise and patrolling were conducted to assure people and to maintain law and order, the officer said. A team of Rapid Action Force has also been deployed to keep a tight vigil on the situation.

Rangnani said an FIR was registered on Saturday under sections 307 (attempt to murder), 120 B (criminal conspiracy), 147 (rioting) and other relevant sections of the Indian Penal Code and the Arms Act.

"One of the accused persons, identified as Md. Aslam, opened fire that hit a sub-inspector of the Delhi Police. The pistol used by the accused during the commission of crime has been recovered from his possession," according to the police.

The injured are being treated at the Babu Jagjeevan Ram Memorial Hospital. The condition of the sub-inspector who received bullet injury is stated to be stable, the police said.