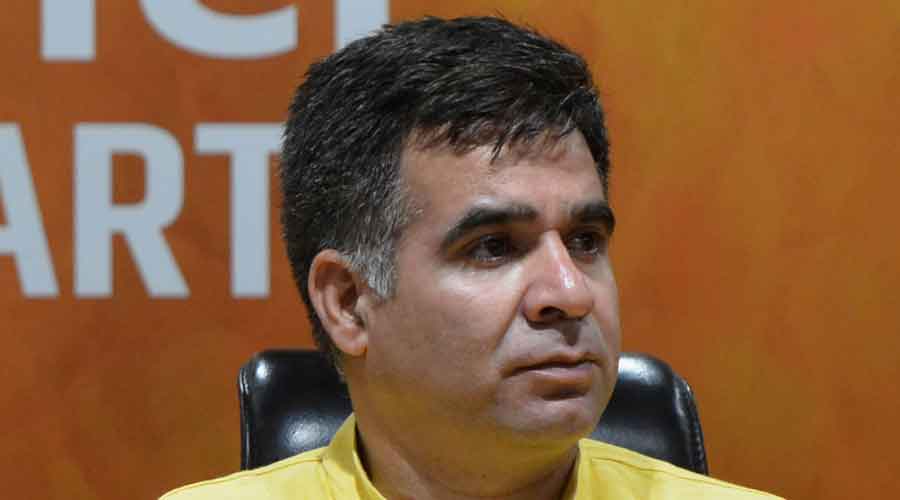 Article 370 provisions junked, Jammu and Kashmir BJP chief Ravinder Raina has set himself and his party a new goal.

Many in Jammu and Kashmir believe that Article 370, which gave special rights to permanent residents, was scrapped to change the Muslim-majority character of the erstwhile state. Remarks like Raina’s can only add to their fears.

Raina, seen by many as a loose cannon, has risen through the ranks in his party. He is known for making inflammatory remarks, and with elections approaching he is always willing to walk the extra mile.

“Just wait and watch. You will see what more they have to do. They will have to wear a tilak and chant ‘Jai Sri Ram’,” Raina told a local TV channel in Jammu on Tuesday.

The National Conference and the PDP are part of a seven-party alliance campaigning for the restoration of Article 370. The alliance will be contesting the maiden district development council elections, beginning from November 28, to rally support for its agenda.

Raina had gone into a shell recently after the Centre changed the laws to allow outsiders to own land in Jammu and Kashmir. The decision has enraged many Jammu Hindus, called Dogras, who see it as an assault on their culture.

The local Congress leadership’s decision to have a poll tie-up with the alliance has now given Raina an opportunity to bounce back with a vengeance. The Congress has clarified that it is not part of the alliance, which suggests it only wants a seat-sharing arrangement.

Raina threatened to send all the Valley’s mainstream politicians to jail and said that whatever they ate would be pulled out through their nose.

“Yeh Gokkar gang waley, yeh ghaddar, loteri, daku, desh de ghaddar, sarey atankwadi, Pakistani (This Gupkar gang, these traitors, thieves, bandits, traitors against the country, all are terrorists, Pakistani). They are taking money from China to vitiate the atmosphere in Jammu and Kashmir." he said.

"People will teach them a lesson. They know the BJP will sweep the elections."

Mehbooba has refused to hold the national flag until Jammu and Kashmir’s former state flag has been restored.

PDP spokesperson Najmus Saqib said Raina wanted to pit one community against another for votes and divert the people’s attention from issues such as joblessness.

“The ruling alliance in Bihar has not a single Muslim candidate (MLA); it’s a reflection of what they want to eventually do in Kashmir,” Saqib told The Telegraph.

“This is brazen communalism. The people of India will have to decide whether they want to live in a theocratic Hindutva society or... a secular state.”

The BJP government in Madhya Pradesh has decided to set up a separate “cabinet” for the protection and promotion of the cow, PTI reported.

The maiden meeting of the “gau cabinet” will be held on November 22 at a cow sanctuary.

MP to set up a ‘cow cabinet’