In a first for any country, Chandrayaan-2 will attempt a soft landing on the south polar region of the moon 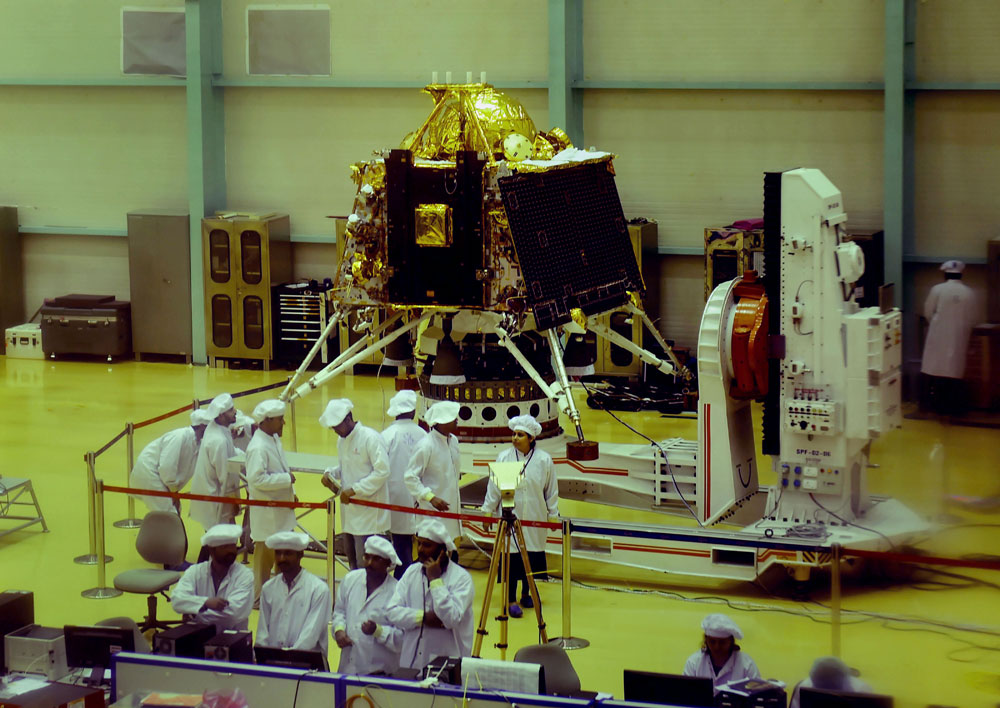 India's second sojourn to the moon, Chandrayaan-2, will be launched on July 15, Indian Space Research Organisation (Isro) announced on Wednesday, as it is all set for the most complex mission ever undertaken by them. Under the nearly Rs 1,000 crore mission, the landing on the moon near the South Pole would be on September 6 or 7 on an uncharted territory, Isro chairman K. Sivan said.

The Lander, named after the father of the Indian space programme, Vikram Sarabhai, will touch down on a rugged lunar surface in the final descent, which, according to Sivan, would be the “most terrifying moment” of the mission.

'These 15 minutes are going to be terrifying for all of us, not only for the people from Isro, but for all of India, because the space agency has never undertaken a complex flight of this kind', he said.

The landing site, at about 70 degrees south latitude, is the southernmost for any mission, not attempted before by any country, according to Isro, as the Indian space agency eyed an ambitious feat after missing many dates.

The launch will take place at 2:51 am on board the GSLV MK-III vehicle, the heaviest rocket built by Iv, from the spaceport of Sriharikota in Andhra Pradesh.

The Isro had earlier kept the launch window for the mission from July 9 to July 16.

Soft-landing on the south pole of the moon, a territory that has never been visited by any spacecraft, is considered the most challenging part of the mission.

Pointing out that Chandrayaan-2 is going to South Pole, a place where nobody else has gone, Sivan said the entire scientific community of the nation and the globe were eagerly waiting for the mission.

According to him, there is both convenience and science involved for choosing the South Pole.

'From the science point of view, the south pole is under shadow region more than the North Pole, so because of this special aspect of south pole, water is expected to be more there, as well as more minerals,” he added.

The spacecraft, with a mass of 3.8 tonne, has three modules -- Orbiter, Lander (Vikram) and Rover (Pragyan).

If all goes well, India would be the fourth country after the US, Russia and China to perform a soft landing on the moon and put a rover on it.

The Orbiter will be orbiting around the moon in 100/km orbit, Sivan said.

'Subsequently the rover will be rowing on the moon on its own propulsion at the speed of 1 cm/second and will cover 500 metres in its lifetime,” he added.

”The whole country is waiting for this Chandrayaan-2 mission, yes Isro has slipped (dates) many times, now Isro has firmed up the date of launch, it is July 15 early morning at 2:51,” Sivan told reporters here.

Chandrayaan-2 will also have the credit of being India's first interplanetary mission to be steered by two women- with M. Vanitha as Project Director and Ritu Karidhal as Mission Director.

Chandrayaan will carry 13 Indian payloads (8 on orbiter, 3 on lander and 2 on rover) and one passive experiment from NASA.

The mission cost of Chandrayaan-2 with regard to the satellite was Rs 603 crore, he noted.

According to Isro, Orbiter, with scientific payloads, would orbit around the moon.

Lander would soft land on the moon at a predetermined site and deploy the Rover.

The scientific payloads on board Orbiter, Lander and Rover are expected to perform mineralogical and elemental studies of the lunar surface.

The Orbiter and Lander modules would be interfaced mechanically and stacked together as an integrated module and accommodated inside the GSLV MK-III launch vehicle.

Rover is housed inside Lander.

After launching into an earth-bound orbit from GSLV MK-III, the integrated module would reach the moon orbit using the orbiter propulsion module and subsequently, Lander would separate from Orbiter and soft land at the predetermined site, close to lunar South Pole, the Isro said.

Chandrayaan-2 is an advanced version of the previous Chandrayaan-1 mission, which was launched about 10 years ago.

Chandrayaan-1 had 11 payloads --five from India, three from Europe, two from the US and one from Bulgaria -- and the mission had the credit for discovery of water on the lunar surface.

The 1.4-tonne spacecraft was launched using PSLV and the orbiter had orbited 100 km from the lunar surface.