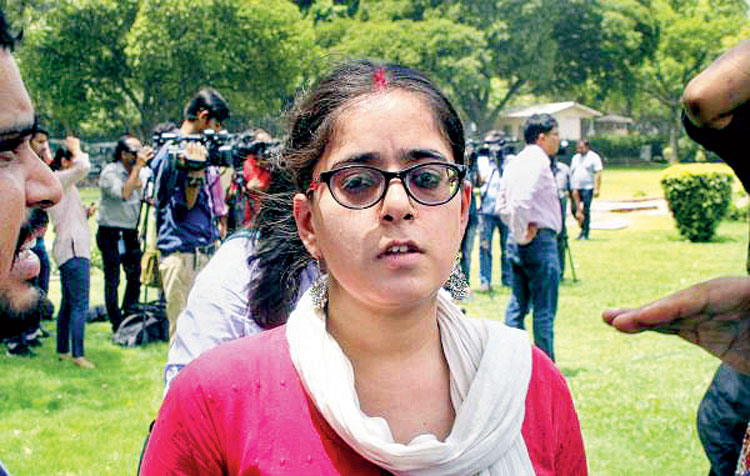 The Supreme Court on Tuesday exercised its special powers to direct the “immediate release” of a journalist arrested by Uttar Pradesh police for objectionable tweets against chief minister Yogi Adityanath, saying an individual’s liberty was a “sacrosanct and non-negotiable” guarantee under the Constitution.

Justices Indira Banerjee and Ajay Rastogi pulled up the state government for the “glaring illegality” of the arrest and said that while they “might not approve of the nature” of Prashant Kanojia’s posts, it was not a crime like “murder” to warrant prolonged incarceration.

“Opinions may vary, but liberty cannot be deprived. A person can’t spend 11-14 days behind bars for this kind of post. It is not a murder,” Justice Banerjee said.

The order to release the journalist came on a petition filed by his wife, Jagisha Arora.

Jagisha said the order had reaffirmed her belief in the Constitution. PTI quoted her as saying she would go to Lucknow to complete the due legal process once she gets a copy of the order.

Kanojia had been arrested from his East Delhi residence on June 8 over tweets related to a woman’s purported marriage proposal to Adityanath and a judicial magistrate had remanded him in custody in a Lucknow jail till June 22.

Additional solicitor-general Vikramjit Banerjee, who appeared for the state government in the top court, said the bench shouldn’t entertain the petition filed under Article 32 (enforcement of fundamental right).

The petitioner, the ASG contended, should have ideally approached a sessions court or Allahabad High Court for her husband’s release.

The bench rejected the argument. “…when the illegality is so glaring, should we tell a petitioner no, you go to high court, or you go to a magistrate?

“Liberty of an individual is sacrosanct and non-negotiable. It is a constitutional guarantee,” Justice Banerjee, who was heading the bench, observed.

Law officer Banerjee said the authorities had examined Kanojia’s Twitter handle and found that he had made a series of controversial tweets, including attacks on Hindu gods and goddesses.

“We might not approve of the nature of his posts. But we are concerned about the arrest and incarceration. This is a nation that has a Constitution where liberty cannot be infringed (upon) like this. You are entitled to proceed under the law, they are entitled to defend,” Justice Banerjee said.

Justice Rastogi said this was, perhaps, the first time that someone had been put behind bars over a post and asked the law officer to produce such instances of arrests.

The ASG then pointed out that the Bengal government had recently arrested a BJP activist for alleged controversial posts. He said the top court had directed her release subject to the condition that she apologise after being freed.

“We also take so much from social media. We also bear the brunt. But can that result in incarceration? Show… magnanimity,” Justice Banerjee said.

The ASG then submitted that any order in favour of the petitioner would be considered an “endorsement” of the controversial tweets.

“Maybe, we don’t appreciate his views,” the court said. “But the question is, should he be put behind bars? Undue harsh action will be counter-productive. We live in a country where the Constitution is supreme.”

The law officer insisted that any observation or order passed by the court would affect the trial. “I don’t think so… we are for disapproval of deprivation of freedom. But, certainly, we don’t approve the tweets…. We disapprove deprivation of liberty,” Justice Banerjee said. “Liberty of an individual you can’t take away like this.”

The court also said that merely because somebody had tweeted something doesn’t mean people would take it as true. “People are educated and intelligent. It is wrong to assume that whatever is put in social media would be believed or accepted,” the bench said.

The bench then passed its order, directing the journalist’s immediate release after citing its extraordinary powers under Article 142 of the Constitution “to do complete justice”.

“We need not comment on the nature of the posts/tweets for which the action has been taken. The question is whether the petitioner’s husband — Prashant Kanojia — ought to have been deprived of his liberty for the offence alleged. The answer to that question is prima facie in the negative. The fundamental rights guaranteed under the Constitution of India and in particular Articles 19 and 21 of the Constitution of India are non-negotiable,” it said.

“…We direct that the petitioner’s husband be immediately released on bail on conditions to the satisfaction of the jurisdictional Chief Judicial Magistrate. It is made clear that this Order is not to be construed as an approval of the posts/tweets in the social media. This order is passed in view of the excessiveness of the action taken,” the court added. “Needless to mention that the proceedings will take their own course in accordance with law.”

Another journalist at a Noida-based TV channel has been arrested allegedly over defamatory content against Adityanath, officials said, according to PTI.