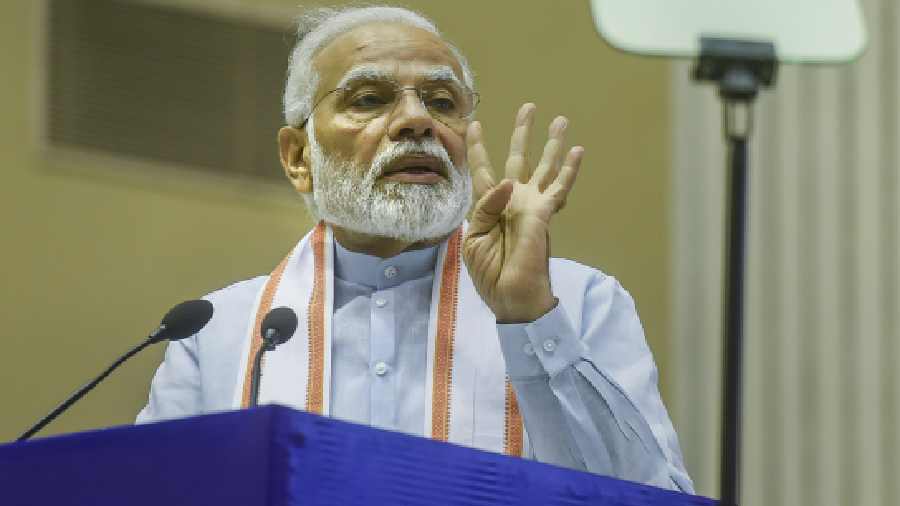 Prime Minister Narendra Modi announced on Sunday that India has achieved the target of 10 per cent ethanol blending in petrol five months before the deadline.

Making the announcement at a programme on the 'Save Soil Movement', which coincided with the World Environment Day, Modi cited a number of measures taken by his government to protect the environment, saying its efforts have been multi-dimensional despite the country having a negligible role in climate change.

The rise in ethanol blending in petrol from 1.5 per cent in 2014 to 10 per cent now has reduced carbon emission by 27 lakh tonnes and saved Rs 41,000 crore of forex reserve. This has also brought Rs 40,000 crore of income to farmers, he said, adding the feat was achieved on Sunday.

In his address, the prime minister said India has also achieved its goal of having 40 per cent of its installed power generation from non-fossil fuel-based sources nine years before the deadline.

Solar energy capacity has increased by 18 times and initiatives like Hydrogen Mission and circular economy and scrappage policy are examples of our commitment to environment protection, he said.

He expressed satisfaction that his government's key programmes of the last eight years have an angle of environment protection, citing the Swachh Bharat Mission, waste to wealth related programme, reduction of single use plastic, one Sun one earth or ethanol blending programme as examples of multi-dimensional efforts for preservation of environment.

Taking a jibe at the developed world, he said they not only exploited more and more resources of the earth but also contributed to maximum carbon emissions.

He said India is working on a long term vision in collaboration with the international community on protecting the environment and established organisations like Coalition for Disaster Resilient Infrastructure and International Solar Alliance.

He reiterated India's goal of Net-Zero by 2070.

To save the soil, India has focused on five main things, he said, citing efforts to make the soil chemical free, to save organisms that live in the soil, to maintain soil moisture, to increase the availability of water, to remove the damage that is happening to the soil due to less groundwater, and to stop the continuous erosion of soil due to the reduction of forests.

Farmers earlier lacked information about the type of soil, deficiency in soil and how much water is there, he said, noting that his government launched a huge campaign to give soil health cards to them to overcome the problem.

A campaign to conserve 13 big rivers has also started in the country, and along with reducing pollution in water, work is also being done to plant forests on the banks of rivers, he said, noting that this will add a forest cover of 7,400 sq km.

Praising natural farming, Modi said it offers solution to some of our biggest problems.

The government has decided to encourage natural farming in villages situated on the banks of Ganga which will make it a huge corridor of natural farming, he said.

This will not only make our farms chemical free but the Namami Gange campaign will also gain new strength.

India is working on the goal of making 26 million hectares of barren land fertile by 2030, he added.

Modi said due to the PM National GatiShakti Master plan logistics system and transport system will be strengthened and that will lead to reduction of pollution.

Multi-modal connectivity work on more than 100 waterways will also help in reducing pollution, he said, noting this will create lot of green jobs.

The 'Save Soil Movement' is a global initiative to increase awareness about deteriorating soil health and bring about a conscious response to improve it, the Prime Minister's Office (PMO) had said in a statement.

The movement was started in March by Sadhguru Jaggi Vasudev, who embarked on a 100-day motorcycle journey passing through 27 countries, it said, adding that June 5 marks the 75th day of the journey.