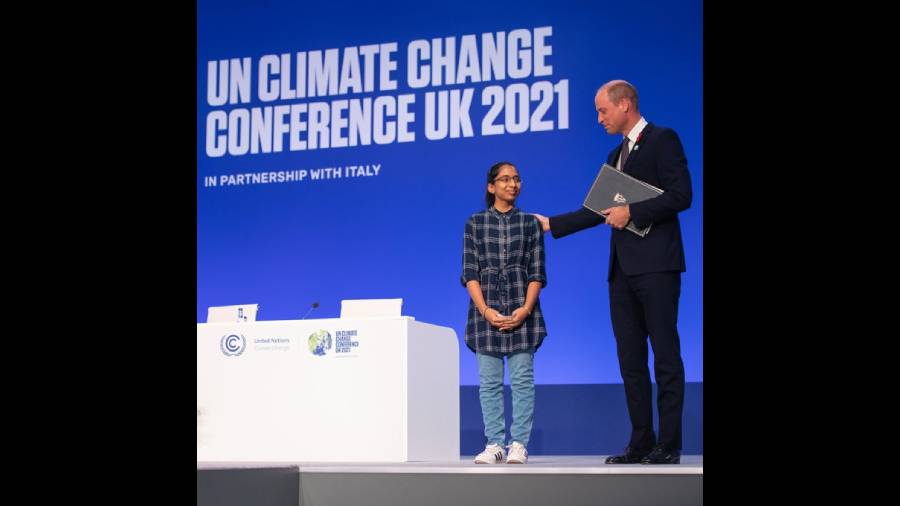 Vinisha was short listed in the 1 million pounds Earthshot Prize under the Clean Our Air category.
Twitter/ @KensingtonRoyal
Our Bureau   |   Glasgow   |   Published 03.11.21, 07:58 PM

Vinisha Umashankar (15), whose solar-powered ironing cart project made it to the finals of Prince William’s inaugural Earthshot Prize, addressed the World Leaders’ Summit of the COP26 conference in Glasgow spurring them to act and save the planet, according to The Hindu.

Vinisha, who hails from Tamil Nadu, was part of the “Accelerating Clean Technology Innovation and Deployment” session that was attended by Prime Minister Narendra Modi before he flew back to New Delhi on Tuesday. “We, the Earthshot Prize Winners and finalists, are proof that the greatest challenge in the history of our Earth is also the greatest opportunity. We lead the greatest wave of innovation humanity has ever known,” said Vinisha.

“We chose not to complain, but take actions that will make us wealthier and healthier. We chose to do these things, not because they are easy, but because they are hard. Rising to these challenges will shape a new generation. A generation that will build a better world for all of us and generations to come,” she added. “We won’t wait for you to act. We will lead even if you don’t. We’ll build the future, even if you are stuck in the past. Please accept my invite. I assure you won’t regret it,” she said.

Vinisha was short listed in the 1 million pounds Earthshot Prize under the Clean Our Air category “with her concept of a solar-powered clean alternative to the charcoal-powered street irons that press clothes for millions of Indians each day.” She also held a meeting with Modi along with the Indian winner in the category, Vidyut Mohan.

“It was such an honour meeting the Prime Minister, who was very curious about my winning agricultural waste recycling project and had some very encouraging words about scaling this up to help farmers all over India,” said Mohan, co-founder of Takachar named the winner of the prize for its cheap, small-scale, portable technology that converts crop residues into sellable bio-products.

“The prize means a lot as it gives the project a global scale and also offers us access to crucial support and funding,” said Mohan. Prince William, the Duke of Cambridge was part of the World Leaders’ Summit, hosted by UK Prime Minister Boris Johnson where world leaders discussed plans to tackle climate change along with the finalists who interacted with philanthropists, NGOs and some of the world’s biggest companies and brands representing 3.6 million employees globally for the first time. They will join come under the same roof to support the unique solutions conceived by the 15 finalists.