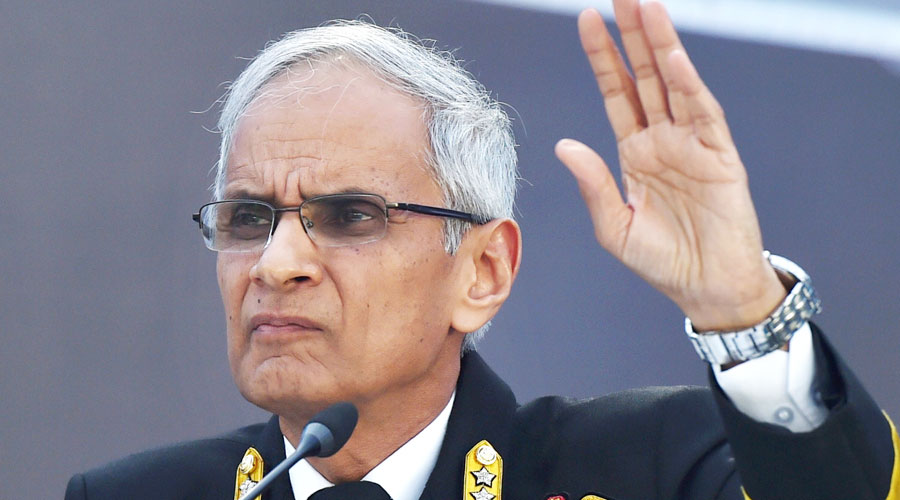 Navy chief Admiral Karambir Singh on Thursday said attempts to change the status quo on India’s northern borders had increased complexities in the country’s security situation and posed a challenge along with the Covid-19 pandemic.

“The Covid-19 pandemic disrupted every aspect of life. The near simultaneous attempt to change the status quo at our northern borders has significantly increased the complexities in our security situation. The dual challenge scenario continues as we speak and the country collectively continues to battle the pandemic and tackle the security challenges,” he said.

Indian and Chinese troops have been locked in a border standoff in eastern Ladakh since early May. The Chinese People’s Liberation Army has altered the unmarked Line of Actual Control at several friction points and, according to estimates, have taken over close to 1,000sqkm of India-claimed territory.

Addressing a news meet on the eve of Navy Day, Admiral Singh said his force was alive to various threats in the maritime domain, including from China, and was fully ready to deal with them.

He said the Indian Navy will formally write to the Centre on the pressing need to have a third aircraft carrier to enhance its maritime capabilities and air operations that are critical in the seas and are important for an “aspirational nation”.

“We will soon make an official case for it… We are absolutely clear of the utility of the carrier. This is because air operations are integral to naval operations and air power at sea is required since the navy is all about reach and sustenance,” Admiral Singh said.

Underlining that enhancing the underwater capability of the country has been a focus of the Indian Navy, he said: “If you are a nation that is aspirational and you want to become a $5-trillion economy shortly and you want to do well, you will have to go outwards and seek the world. The nation does not want the navy to be restricted to its shores… aircraft carriers are absolutely necessary.”

The navy chief’s remarks are significant in the wake of the growing influence of the Chinese navy in the Indian Ocean region.

Currently, India has INS Vikaramaditya as the only operational aircraft carrier while INS Vikrant is under construction.

“Vikrant is in an advanced stage and will begin sea trial in early 2021,” the navy chief said, adding that Chinese research and fishing vessels have been active and three warships deployed in the Gulf of Aden in the Indian Ocean region, but there has been no infringement of India’s maritime boundaries.

He said the Indian Navy is in the process of procuring Smash 2000 rifles to enhance its anti-drone capabilities in the seas.

The rifles can take down unmanned aerial vehicles (UAVs) meant to carry out combat operations.

Referring to the situation along the LAC in eastern Ladakh, Singh said the Indian Navy had pressed into action its assets, including the P8I reconnaissance aircraft and Heron Unmanned Aerial Vehicle, in the region. “Whatever we are doing is in close coordination with the army and the Indian Air Force,” he said.

He said the navy has put in place a standard operating procedure in the event of any infringement of its maritime domain in the Indian Ocean region by China.

On the rapid expansion of the Chinese PLA and possible challenges for India, Admiral Singh said the navy was cognizant of it and was focusing on its overall combat prowess.

“As a primary manifestation of India’s maritime power, the Indian Navy stands ready to fulfil its mandate to protect our national interest in the maritime domain,” he added.