Advertisement
Home / India / India: Why are suicides among farmers on the increase?

India: Why are suicides among farmers on the increase?

Financial burdens caused by climate change and government polices have led to an rise in the number of suicides among agricultural workers, experts say. The Maharashtra state has suffered more than most 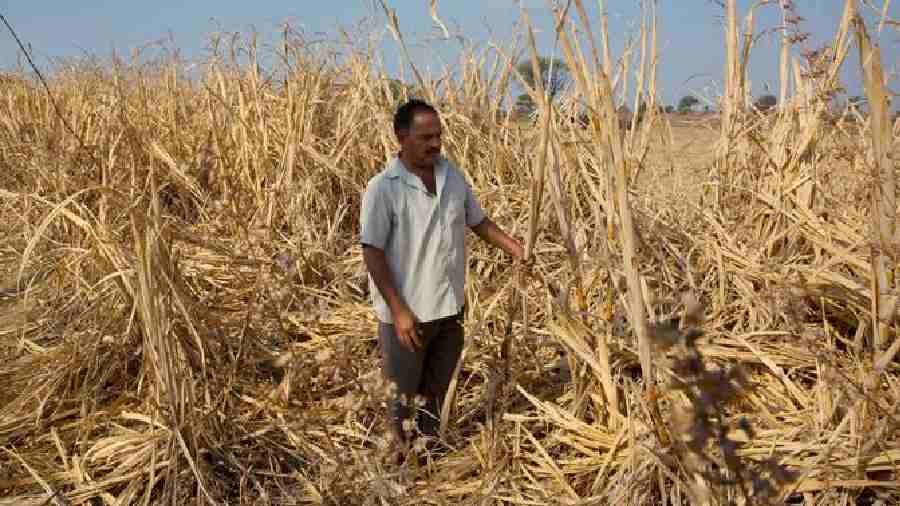 In India, over 600 farmers in the region of Marathwada, Maharashtra state, have died from suicide this year, according to official figures, with a majority of deaths blamed on rains that damaged thousands of hectares of agricultural land.

And agricultural experts believe the death toll could be even higher.

The figure is almost certain to eventually exceed last year's official figure of 805 suicides across Marathwada's eight districts, and this was despite two consecutive state governments waiving farm loans in 2021.

Some 65% of the population living in this region are solely dependent on agriculture and allied activities for their livelihood and vocational needs. With climate change having drastic effects on crop production, many are beginning to suffer.

"When it comes to agriculture, the sector is tethered to poverty and distress. The deaths are a reflection of the extremely fragile nature of farming communities and a multiple set of crises affects them," Joginder Singh, a prominent farm union leader, told DW.

This year, however, extreme rainfall events in Maharashtra damaged crops across 800,000 hectares, affecting farmers in 24 districts, mostly in the regions of Marathwada and Vidarbha.

Paddy, corn, soyabean, cotton, pigeon peas and banana crops and other vegetables have been heavily damaged, according to the state agriculture department with half the damage reported by Marathwada alone.

The latest report of the National Crime Records Bureau (NCRB) in India, published earlier this week, said 5,563 agricultural laborers committed suicide last year and the number of people killing themselves in the industry increased by 9% from 2020, and up 29% from 2019.

Most suicides were reported in Maharashtra with 1424 cases, followed by Karnataka with 999, and Andhra Pradesh with 584.

"It is unfathomable that farmers' suicides are increasing every year, especially in the cotton growing belts. Crop failures, rising inputs costs and low market prices often trap the farmers in a cycle of debt. Farmers haven't fully recovered from the lockdowns yet too," Indra Shekhar Singh, independent agriculture policy analyst told DW.

Experts point out that the government through direct benefit transfers (DBT) can help farmers to diversify and move away from water-guzzling crops such as BT cotton and sugarcane, while moving towards climate suited crops such as millets, legumes or oilseeds.

"If DBTs are successfully implemented the government may score points with the farmers and also help mitigate climate change and save the precious water in this dry region," added Singh.

Problems are compounded by a lack of support from banks, especially in the face of inclement weather and market fluctuations.

"Farmers are hence prompted to turn to local moneylenders who charge them a much higher rate of interest," Singh said.

India is an agrarian country where over 50% of the population is reliant on agriculture to make a living. Apart from the rising farmers' suicides in vast swathes of the country which is worrying, millions of mostly small-scale farmers have been squeezed by falling prices for their crops and the rising transportation and storage costs.

Outbreaks of rural discontent pose a challenge to Prime Minister Narendra Modi, who promised to double farm incomes in five years when he came to power in 2014.

The suicides expose the precarious state in which the country's struggling farmers and impoverished agricultural laborers currently find themselves in.

Last year, the Modi government was forced to repeal contentious agriculture laws that were proposed to modernize the farm sector after a nationwide agitation by farmers.

"Farmers withstand instability and an absence of security especially in Maharashtra. Their crop holdings are smaller than the farmers in Punjab. Debt cycles and erratic weather patterns like this year only add to their woes," Darshan Pal Singh, leader of the Krantikari Kisan Union, told DW.

"The magnitude of the problem is so big that no government has ever tried to understand the increasing burden on the farmers due to inflated prices of agricultural inputs."

Farmer groups point out that it was the government which decides the market rates and fails even to meet the Minimum Support Price (MSP) – the price at which the government is supposed to buy that crop back from farmers if the market price falls below it.

"Climate change has acted as the last nail in the coffin by resulting in furthering of the uncertainties associated with the already uncertain monsoon system and hence agricultural production," Ketki told DW.

"Can you imagine that nearly 30 people in the farming sector die by suicide daily?" she said.

According to government figures, two-thirds of India's population of 1.3 billion depends on farming for their livelihood, but agriculture makes up just around 17% of the nation's total economic output, amounting to around $2.3 trillion (€2.3 trillion).