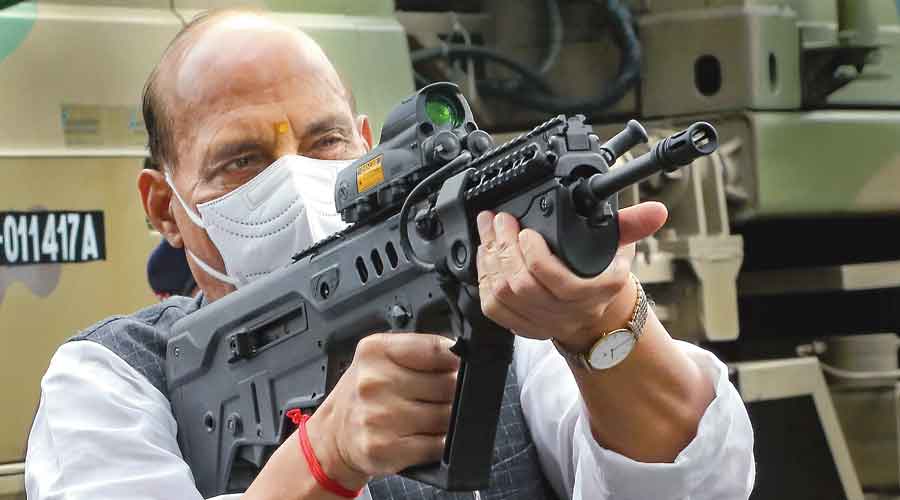 Defence minister Rajnath Singh on Sunday said that India wants peace on the China border, the comment coming after he had performed “Shastra Puja”, a weapon-worship ritual conducted by the army on Dussehra.

“We want the tension that is prevailing along the India-China border to end.... We want peace to prevail,” Rajnath, who was on a two-day visit to north Bengal and Sikkim, said after the puja in Sukna, headquarters of the 33 Corps of the army.

He inaugurated an alternative stretch of road connecting Gangtok with Nathu La on the China border.

Rajnath was accompanied by the army chief, General Manoj Mukund Naravane, and a host of senior officers at the puja, held at the Sukna War Memorial in Darjeeling district.

“The morale of our army is high and I’m confident that our soldiers will not let anyone take even an inch of our land,” Rajnath said.

Rajnath had been scheduled to perform the puja at Sherathang, a high-altitude border barely 2km from the Line of Actual Control in Sikkim, but the plan was dropped because of bad weather, a source said.

Rajnath’s puja of weapons in the region amid the standoff with China in eastern Ladakh was significant, a defence expert said.

“A tense confrontation between Indian and Chinese soldiers took place in north Sikkim in early May. So, the defence minister’s visit and the puja of weapons is significant, as it signals India’s confidence,” the expert said.

Multiple sources said that Rajnath, after landing in Bagdogra on Saturday, went straight to Sukna where senior army officials briefed him about the situation in the region and the China border.

Gangtok with Nathu La by the minister is also significant for strategic reasons,” the expert said.

Although the new, 19.85km road marks a longer route between Gangtok and Nathu La, it will reduce the travel time since it’s a two-lane highway and has been built on topographically stable terrain.

“The new alignment was necessary since the existing alignment has suffered extensive damage due to sinking and other natural hazards,” the Border Roads Organisation, which maintains the highway, has said in a release.

“The road serves as an important link to bolster defence preparedness in the Nathu La sector in particular and all of east Sikkim in general.”

While inaugurating the road through videoconferencing, Rajnath lauded the BRO for delivering outstanding-quality infrastructure in record time and optimal cost.

“The defence minister enumerated the government’s drive towards progressing infrastructure development in far-flung areas to not only enhance defence preparedness but also in fostering socio-economic development of the region,” the release said.

Since October 10, when Sikkim reopened its gates to tourists after the lockdown, about 1,500 sightseers have visited Tsomgo and Baba Dham, sources said. Nathu La is, however, yet to be reopened for tourism.

Sikkim chief minister P.S. Tamang has welcomed the opening of the new road as a boost for tourism.

“The chief minister of Sikkim brought out the positive impact the new alignment will have in boosting tourism as well as in inclusive socio-economic development of the entire region and the state,” a release from his office said.