'Heal in India can become a big brand of this decade' 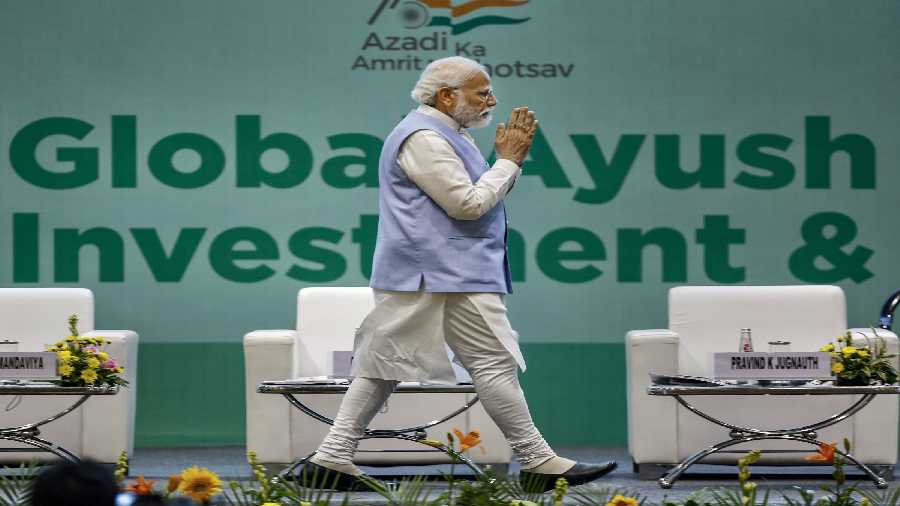 Prime Minister Narendra Modi on Wednesday said that to promote the traditional medicine industry, India will soon launch `AYUSH mark' which will give authenticity to quality AYUSH products made in the country.

Speaking of "Heal in India", he also announced that a special visa category will be created soon for those who want to travel to the country to avail of AYUSH therapies.

Modi was speaking after the inauguration of the three-day Global AYUSH Investment and Innovation Summit at Mahatma Mandir here in the presence of Mauritius Prime Minister Pravind Jugnauth and Director General of the World Health Organization Dr Tredos Ghebreyesus.

"Traditional medicine helped increase tourism in Kerala. This power is in the whole of India, in every corner of India. 'Heal in India' can become a big brand of this decade. Wellness centers based on Ayurveda, Unani, Siddha, etc., can be very popular," the prime minister said.

The special "AYUSH visa" will help those who wish to seek traditional treatments in India, he said.

The possibilities of investment and innovation in the field of AYUSH are limitless with the country having witnessed unprecedented growth in the production of AYUSH medicines, supplements and cosmetics, the prime minister said. "Before 2014, the AYUSH sector was less than USD 3 billion. Today it has also crossed USD 18 billion," he said.

There are also possibilities of investment and innovation in supply chain management, AYUSH-based diagnostic tools and tele-medicine, Modi said.

The Union Ministry of AYUSH has also taken steps to encourage start-up culture in the field of traditional medicine, and an incubation center developed by the All India Institute of Ayurveda was inaugurated recently, he noted.

"In India, this is an era of unicorns. In 2022, so far 14 start-ups from India have joined the unicorn club. I am sure unicorns will emerge from our AYUSH start-ups very soon," Modi said.

India of the 21st century wants to move ahead by sharing its experience, knowledge and information with the world, the prime minister said. "The main reason for the prosperity of Ayurveda has been its open source model. Ayurveda has developed through open source tradition. Even today, we should learn from our ancestors to work with intellectual openness," Modi said. The government is also working on the modernization and expansion of AYUSH e-market portal to connect farmers with companies which make AYUSH products, he said, noting that medicinal plants can be a good source for increasing farmers' income. "It has a large scope for employment generation. But we have seen that the markets for such plants and products are limited and specialized. It is very important that farmers involved in the production of medicinal plants get the facility to easily connect with the market," he said. The new category 'AYUSH Aahar' introduced by the FSSAI last week in its regulations will help the producers of herbal nutritional supplements, Modi said. The AYUSH Export Promotion Council, set up recently, will encourage exports and help find foreign markets, the prime minister added.

The government is going to create a network of AYUSH Parks to encourage research and provide a new direction to AYUSH manufacturing, he said. The Covid -19 pandemic led to increase in the export of turmeric which was seen as immunity-booster, Modi noted. During the same period, modern pharmaceutical companies developed made-in-India Covid -19 vaccines in a very short time, showing "how amazing they were when they got investment at the right time," he said.

"Who could have imagined that so soon we would be able to develop a made-in-India corona vaccine? Innovation and investment increase the capacities of any sector. Time has come to increase investment in the AYUSH sector as well, and this summit is a wonderful launch of the same," Modi said.