Advertisement
Home / India / PMO clarifies. Or does it?

PMO clarifies. Or does it? 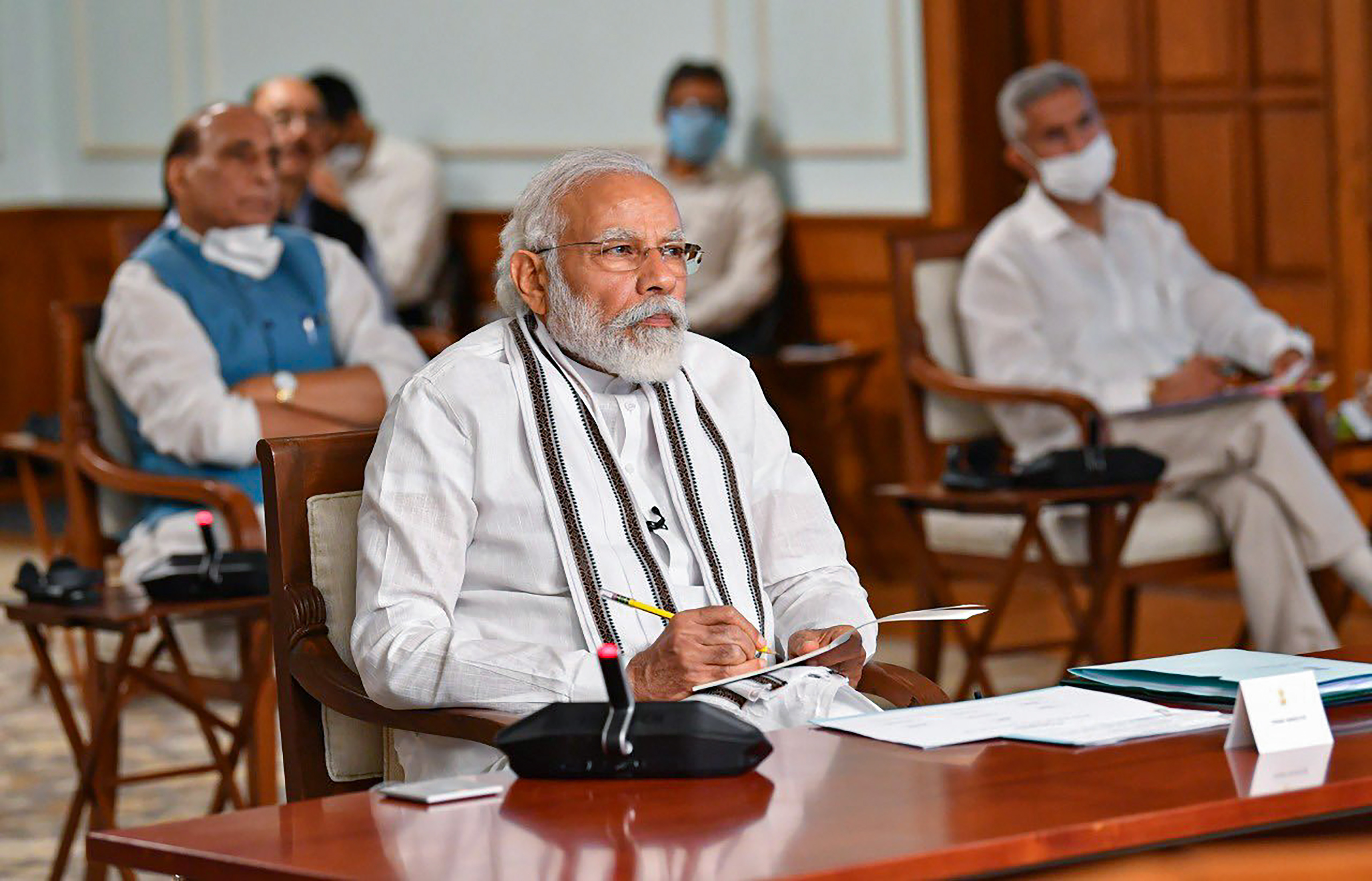 Prime Minister Narendra Modi during the all-party meeting to discuss the situation along the India-China border via videoconferencing in New Delhi on Friday.
(PTI)
Anita Joshua   |   New Delhi   |   Published 21.06.20, 03:29 AM

The Prime Minister’s Office on Saturday issued a statement saying “attempts are being made in some quarters to give a mischievous interpretation to remarks by the Prime Minister at the all-party meeting” on Friday.

Based on the clarification, the speech by Prime Minister Narendra Modi and statements by the Indian foreign ministry, here is what we know till Saturday night.

Did the Chinese intrude into Indian territory?

The Indian external affairs ministry on Tuesday (the day after the massacre): Both sides suffered casualties that could have been avoided had the agreement at the higher level been scrupulously followed by the Chinese side. Given its responsible approach to border management, India is very clear that all its activities are always within the Indian side of the LAC (Line of Actual Control). We expect the same of the Chinese side.

BJP IT cell chief Amit Malaviya on Wednesday: By all accounts… the LAC was not violated.

Plain English: If all Indian activities were always within the Indian side and no firearms or artillery were used, how is it possible to club each other to death without one section violating the Line of Actual Control? (Asked by this newspaper on Thursday, Malaviya did not comment.)

Modi on Friday: Na wahan koi hamari seema me ghus aaya hai aur na hi koi ghusa hua hai, na hi hamari koi post kisi dusre ke kabje me hai (Neither has anyone intruded into our frontier there, neither is any intruder there, nor is any of our posts occupied by someone else).

PMO on Saturday: The Prime Minister’s observations that there was no Chinese presence on our side of the LAC pertained to the situation as a consequence of the bravery of our armed forces.

Plain English: The PMO sought to convey that Modi was speaking about the situation after the night of June 15 when the carnage took place. The PMO assertion tests the Prime Minister’s open-ended statement that said: “Neither has anyone intruded into our frontier there….”

The straightforward fact — that he was speaking about the post-carnage situation — could have been conveyed by Modi, who does not need any communication lessons from anyone, in a direct manner on Friday. The takeaway for many Indians, including seasoned journalists, military veterans and retired diplomats, from the Prime Minister’s speech was: “No one has entered Indian territory.”

The crucial detail of timeline was omitted by the PMO, too, on Friday night when it drew up the highlights, which merely stuck to the latter part of Modi’s statement, saying “Neither is anyone inside our territory nor is any of our post captured: PM”.

Yudhishthir, who supposedly uttered “Ashwathhama hata” and then whispered “iti Narova Kunjarova”, would have been proud.

But Chinese media, controlled by the establishment there, have gleefully translated the ambiguous part of Modi’s speech about no intrusion and are circulating video clips with subtitles in Mandarin.

The propagandists do not care for PMO statements; they pick up the ball and run with it. Hu Xijin, editor-in-chief of the Chinese and English editions of the Global Times, which take pleasure in needling and lecturing India, tweeted on Saturday night: “PM Modi said that China didn’t intrude into Indian territory, no Indian posts were taken over. Indian society must dare to face up to the basic fact: It is Indian troop that provoked the deadly clash. Reckless patriotism, no matter at border or in New Delhi, harms India.”

PMO on Saturday: The sacrifices of the soldiers of the 16 Bihar Regiment foiled the attempt of the Chinese side to erect structures and also cleared the attempted transgression at this point of the LAC on that day.

Plain English: There was an “attempt” at transgression, which does not mean transgression took place. But it becomes muddled from here because the LAC is not a clearly defined line. What the PMO refers to as “this point of the LAC” is not clear, whether it fell on the Indian side or the Chinese side. The attempt seems to be to suggest it took place on a precise point on the LAC, an admirable balancing act that leaves both sides content.

But the Indian external affairs ministry said on Saturday that “Indian troops are fully familiar with the alignment of the LAC in all sectors of the India-China border areas, including in the Galwan Valley. They abide by it scrupulously here, as they do elsewhere. The Indian side has never undertaken any actions across the LAC. In fact, they have been patrolling this area for a long time without any incident. All infrastructure built by the Indian side is naturally on its own side of the LAC.”

Where did the Chinese seek to erect the structures?

The Indian external affairs ministry on Wednesday (briefing on the phone conversation between Indian foreign minister S. Jaishankar and his Chinese counterpart Wang Yi): Ground commanders were meeting regularly to implement this consensus throughout the last week.

While there was some progress, the Chinese side sought to erect a structure in Galwan Valley on our side (stress added by this newspaper) of the LAC. While this became a source of dispute, the Chinese side took pre-meditated and planned action that was directly responsible for the resulting violence and casualties.

PMO on Saturday (clarifying Modi’s speech): As regards transgression of LAC, it was clearly stated that the violence in Galwan on 15 June arose because Chinese side was seeking to erect structures just across (stress added by this newspaper) the LAC and refused to desist from such actions.

Plain English: Ashwathhama, the elephant, is back in the room. The Indian foreign minister says “our side of the LAC”, which is very clear. But the PMO chose the words “just across the LAC” without making it explicit across which side of the LAC. This ambiguity suits the Chinese as they have been claiming that they did not cross the LAC.

Even so it would have meant some ingress or egress, on which the Indian government is silent now.

Later on Saturday, the Indian foreign ministry clarified that “across the LAC means on the Indian side of the LAC”. Imprecise statements, while helpful in diplomacy, can exact a toll on credibility while communicating with people who are banking on the elected leadership to provide clarity.

Have the Chinese been taught a lesson?

PMO on Saturday: The words of the Prime Minister, “those who tried to transgress our land were taught a befitting lesson by our brave sons of soil”, succinctly summed up the ethos and the values of our armed forces.

Plain English: Modi would like the country to believe the Chinese have been taught a lesson. So far, China has not shown any visible sign of being chastened by the casualties it suffered.

Soon after Modi’s speech on Friday night, a telling gesture came from right under his nose in the capital. The Chinese embassy in Delhi uploaded an account that quoted their foreign ministry spokesperson Zhao Lijian as pointing out “that the Galwan Valley is located on the Chinese side of the Line of Actual Control in the west section of the China-India boundary. For many years, the Chinese border troops have been patrolling and on duty in this region.”

The audacity compelled the Indian foreign ministry to assert unequivocally on Saturday that the Galwan Valley is India’s. This is the first time that the Indian government has spoken in such clear terms, something it had failed to do categorically since Monday’s hand-to-hand fight.

“The position with regard to the Galwan Valley area has been historically clear. Attempts by the Chinese side to now advance exaggerated and untenable claims with regard to Line of Actual Control (LAC) there are not acceptable. They are not in accordance with China’s own position in the past,” external affairs ministry spokesperson Anurag Srivastava said.

It is. But a dangerously thin line divides ambiguity and misrepresentation. In a democracy, no diplomacy, however creative or audacious, can succeed unless the people are taken into confidence. No amount of spin can achieve what trust and honesty can.

As former Indian foreign secretary and China expert Nirupama Menon Rao told this newspaper in an interview, “It’s important for the government to provide a clear and coherent message to the public and the various media platforms so that unnecessary speculation and false or misleading narratives are avoided. This is especially so since vital national interests are at stake here.”