Guide to grasp the Ladakh challenge

PLA has been on the aggressive, trying to push deeper into geographies hitherto claimed by India 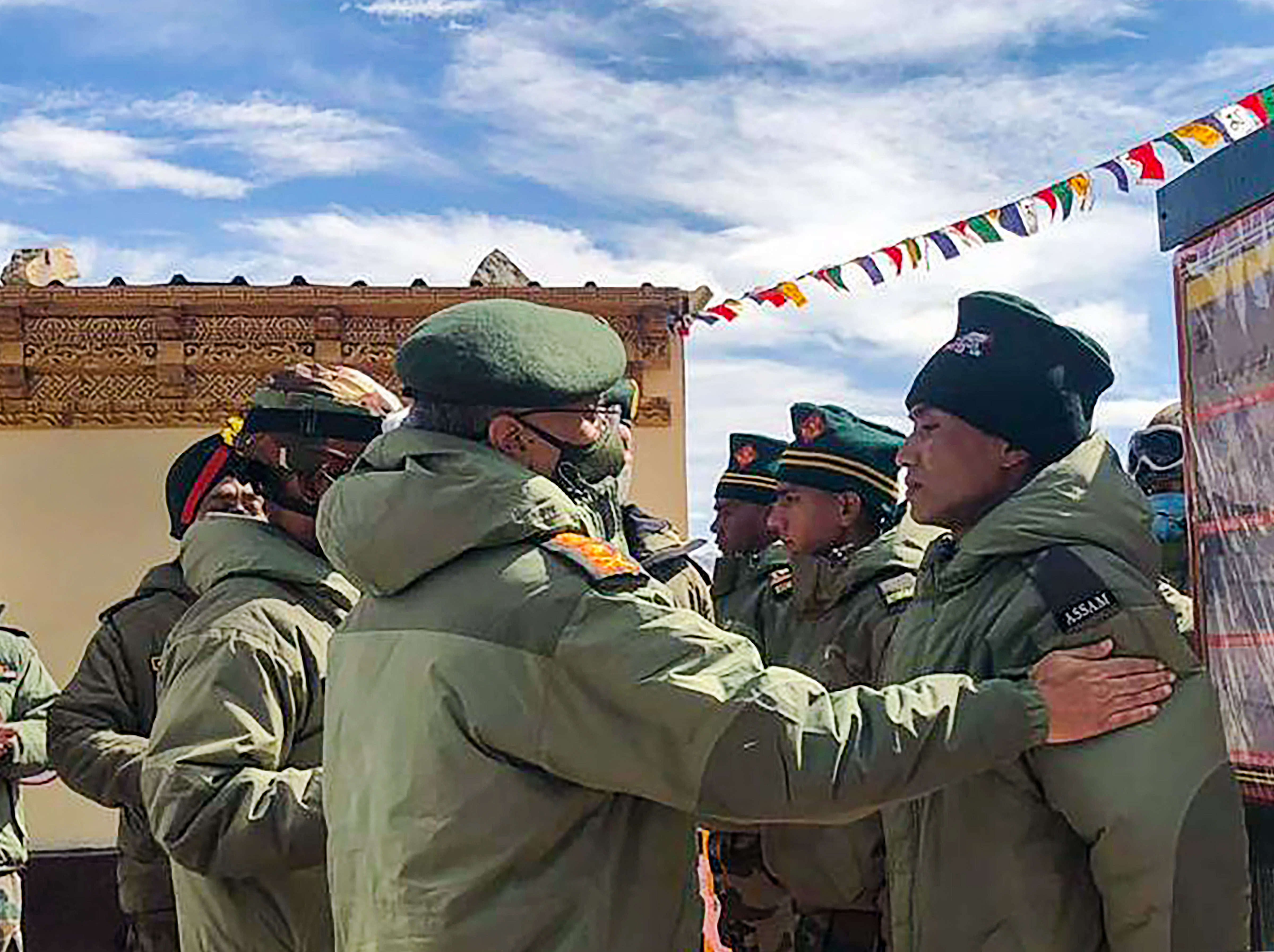 Army Chief Manoj Mukund Naravane interacts with troops while reviewing operational situations on the ground after the stand-off in the region during his visit in Eastern Ladakh on Wednesday.
(PTI)
Sankarshan Thakur   |   New Delhi   |   Published 25.06.20, 01:52 AM

Over the last seven weeks a tense, and often violent, military confrontation has unfurled across three fronts in eastern Ladakh — the Galwan Valley, Hot Springs and Pangong Tso. The Chinese People’s Liberation Army (PLA) has been on the aggressive, trying to push deeper into geographies hitherto claimed by India; Indian forces have been trying to hold them back to their own understanding of what should not be transgressed.

The standoff has spawned its very own lexicon, with several words or terms repeatedly bandied about during the description of the course of events. They may have served more to confound the understanding of what’s transpiring on the remote and barren frontier than to clarify matters. A sample of just how:

LAC or the Line of Actual Control: No such thing exists. Not on the ground, not on the maps, not in any agreed diplomatic or military protocols of the two sides. The LAC is notional and elastic. It is defined merely by previously, or currently, held positions by the two armies and remains subject to de facto, might is right, redrawing and re-definition.

Intrusion: The lack of a defined line — as in the Line of Control (LOC) between India and Pakistan — which both sides have signed up on clouds the whole notion of intrusion. Where there lies no clear or agreed frontier, intrusion is tough to pin down, practically or even legally. Political intention and military ability dictate the state of play on the ground. As they are in eastern Ladakh today, with the PLA reportedly pushing and consolidating on multiple fronts.

The use of “intrusion” along an undefined line is also tricky and double-edged: it can be used as a tool for deniability, it can be used to deliver setbacks.

To use an example: What are we to understand from Prime Minister Narendra Modi’s claim that there has been no “intrusion”? Tough to tell. Intrusion into where? Intruding across what? It was a cleverly open-ended claim the Prime Minister made because there is no defined line.

It was, equally, a risk-ridden claim. Because the claim of “no intrusion” by the Prime Minister can be used, or is being used, by the PLA to press further into areas India earlier treated as its own. The Galwan Valley, for instance, over which China is now laying claims of sovereignty.

Or posts along and overlooking Pangong Tso, where the PLA has reportedly been moving in and squatting with military hardware. Military sources as well as local inputs from Ladakhis suggest the PLA has moved right along ridges from Finger 8 to Finger 4, which was until recently patrolled by Indian forces. One local resident has been quoted as saying: “Where our horses used to graze, there are Chinese now.”

De-escalation and Disengagement: Troublesome terminology when the Indian government is claiming “no intrusion”. If there has been no intrusion, why the requirement for disengagement and de-escalation? Both terms suggest contrary scenarios to claims of all-is-well and of “no intrusion” made by the government and its agencies; they are an admission something is going wrong along the frontiers in eastern Ladakh and needs correction.

Friction: Prior to the June 15 clash, in which 20 Indian soldiers were killed, more than 70 injured and at least 10 taken captive by the PLA, the government was speaking of reducing “friction” without ever clarifying what the friction was over.

June 15 in a sense outed its all-is-well and all-will-be-set-right claims. There is reason to believe that the government was indulging in considerable doublespeak in the lead-up to the deathly clash of June 15. There is reason to believe it may still be doing so, because the “no intrusion” claim made by the Prime Minister is not borne out by the tensions — and negotiations — that have persisted thereafter.

April 19: First intelligence inputs are sent out over the PLA mounting a build-up in the Galwan Valley.

May 5: Several soldiers from either side are injured in a violent clash involving fisticuffs and stones near the northeastern fringes of Pangong Tso.

May 18: The Prime Minister reportedly chairs a high-level security meeting to review the unfolding events in eastern Ladakh. Sources in the army say that the PLA has pitched tents close to Indian positions on Pangong Tso and is “hindering” patrolling by the Indian troops.

May 26: Modi chairs a meeting with national security adviser Ajit Doval and the Chief of Defence Staff, General Bipin Rawat, and discusses the border impasse.

May 30: In his first remarks on the building confrontation, defence minister Rajnath Singh says the Chinese troops have “arrived in quite large numbers” along the LAC, but assures all that efforts are on to defuse tensions.

June 6: The first meeting between top commanders of the Indian and Chinese armies is held at the Chushul-Moldo border junction. Both sides speak of efforts to de-escalate.

June 9: Reports emerge that Indian and Chinese soldiers have disengaged at three locations in eastern Ladakh. ANI, a news agency widely considered the government’s media mouthpiece, claims China has moved back troops by 2-2.5km; there is no confirmation or denial of this from the army.

June 13: The army chief, General M.M. Naravane, claims “the situation along our borders with China is under control” and a lot of disengagement has taken place. He also expresses hope that “through the continued dialogue, all perceived differences will be set to rest”.

June 15: 20 Indian soldiers, including the commanding officer of the 16 Bihar Regiment, are killed in a violent face-off with Chinese troops in the Galwan Valley; more than 70 Indian soldiers are injured and several taken captive. There is no confirmation yet from the Chinese on the casualties the PLA took in the clash at Patrol Point 14.

June 18: The PLA releases 10 Indian soldiers, including a lieutenant colonel and three majors, after long border negotiations between army commanders.

June 19: Modi tells an all-party meeting categorically that there has been no intrusion into Indian territory. A few hours after the meeting ends, the Chinese foreign ministry and the Chinese mission in New Delhi claim all of the Galwan Valley as Chinese territory.

June 20: The PMO and the ministry of external affairs (MEA) issue long-winded clarifications on Modi’s remarks at the all-party meeting but neither addresses issues specifically. There is no clarity on whether there has been intrusion into Indian territory by the PLA. The MEA statement disputes the Chinese claim over the Galwan Valley but stops there.

June 21: Chinese media outlets begin quoting Modi’s remarks from the all-party meeting to assert there have been no violations by the PLA. Reports continue to stream in from the ground of increased activity and ingress by the PLA around Pangong Tso.

June 22: Corps commanders meet again, in the backdrop of the violent clash on June 15; the 11-hour meeting ends inconclusively.

June 23: The Chinese put out a cryptic statement that both sides have decided to “cool down”. Whether this cooling down will hold, and whether it is to happen along an LAC newly defined and dominated by the Chinese, we still have no clarity over.

June 24: General Naravane begins a two-day trip to forward locations in Ladakh. China remains aggressive of posture, iterates unequivocal claim over the Galwan Valley, and lays the blame for the recent tensions and violence squarely on the Indian forces.