Advertisement
Home / India / Congress: PM afraid to look China in the eye
'Modiji, tell us when you're going to throw their troops out'

Congress: PM afraid to look China in the eye

Party says Modi, in his address, did not deal with the coronavirus-induced crisis effectively, nor did he address the overriding concern about neighbouring forces occupying Indian land in Ladakh 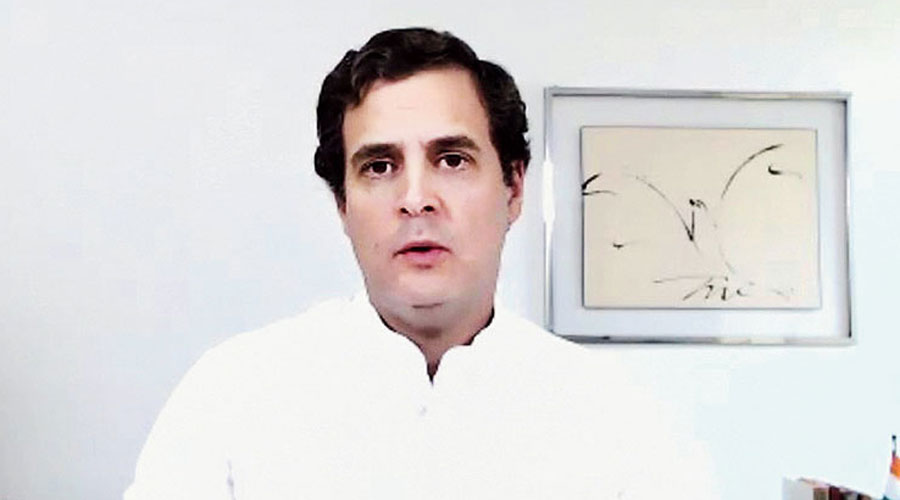 The Congress saw the Prime Minister’s silence on the incursion into Ladakh as “lack of courage” to confront China and argued that Narendra Modi should have responded on Tuesday to the pervasive “confusion and fear” in the country.

Declaring that the much-hyped address to the nation was an acute disappointment, the Congress said Modi neither dealt with the coronavirus-induced crisis effectively, nor addressed the overriding concern about Chinese forces occupying Indian land in Ladakh.

Rahul Gandhi had released a video just before Modi’s address to the nation, possibly expecting him to speak on Covid-19 and China.

“We all know the coronavirus has destroyed the economy and the worst affected are the poor and the salaried class. We have demanded a direct transfer of Rs 7,500 to every family for six months. But the government rejected the demand even as they waived taxes to benefit crony capitalists. There is no financial crunch; even petrol-diesel prices have been increased 22 times (during the lockdown),” Rahul said.

He continued: “Another question to Modiji. It is about him. The country knows China has snatched our land. Everybody knows China is sitting at four places in our territory. Modiji, please tell us when and how are you going to throw the Chinese troops out.”

As Modi chose not to mention China at all, party spokesperson Supriya Shrinate said: “He belied our expectations. He couldn’t muster the courage to take on China. We thought he will shed his fear and look into the eyes of the Chinese leadership to say what they have done is unacceptable. There is an atmosphere of fear and confusion in the country. The Prime Minister needed to address that. But he pretended nothing is wrong on the border.”

Asked about the banning of 59 apps, Shrinate said: “We have to deal with China far more decisively than mere symbolism. We need to inflict solid damage. Nobody knows about most of the apps and you want to hurt a $15-trillion economy by banning some apps? It is a serious question of occupation of our territory. Chinese investments in India has grown phenomenally under Modi; it has jumped to $53 billion from $36 billion in 2014.”

“The Prime Minister came for mere extension of an ongoing scheme; this is an administrative task. Our godowns are overflowing and Sonia Gandhi had already written to the Prime Minister for extending the food scheme till September. We expected the Prime Minister to announce the direct cash transfer scheme, to talk about job losses and about revival of economy. How will the poor family survive only on grains? You have to buy vegetables, milk, medicine… cash is a must,” Shrinate said.

Pointing out that India got loans worth billions of dollar from the World Bank, the International Monetary Fund and the Asian Development Bank, Shrinate said: “Why is the Centre not giving money to states? What are the PM-Cares Fund and tax collected on petroleum products being used for? The government is obsessed with headline management. Modi is fixated on election; he referred to the Chhath festival several times because of Bihar election.”

The Congress also wondered what statistical data the Prime Minister was relying on for his assessment that India was doing well on Covid-19 front? It said India had reached the fourth spot in the world and infections were rising at almost 20,000 a day. The positive rate too had jumped from 4 per cent to 11.5 per cent even as the testing rate was still much lower than most countries.

Ironically, the two pillars of the survival strategy that the Modi government has relied on in the coronavirus crisis are the two schemes introduced by the Congress.

Former Union minister Jairam Ramesh referred to this soon after Modi announced the extension of the foodgrain scheme. He tweeted: “Two laws, the MGNREGA of 2005 & National Food Security Act of 2013, a legacy of the Congress-led UPA, is now the nation’s lifeline. Much maligned by the Prime Minister, but COVID-19 has led to climate change!!!”