In custody in Kashmir: Slap, kick and rats 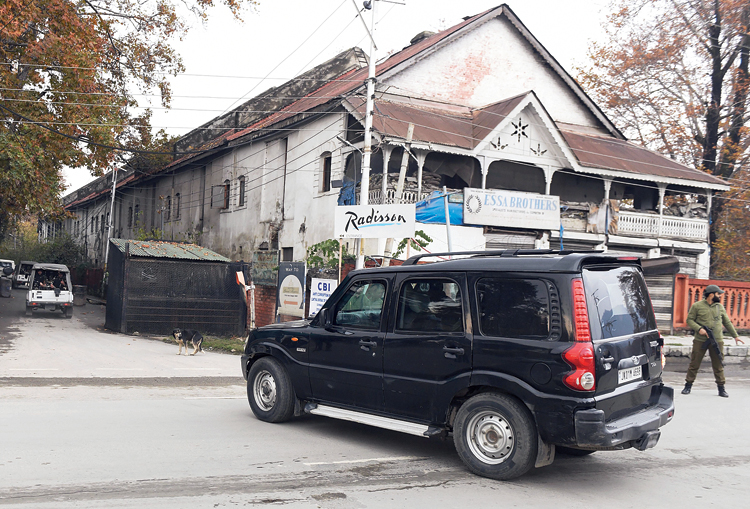 Murtaza Shibli, a British Kashmiri author and journalist who lives between Srinagar, Lahore and London, reports on the life in incarceration of several politicians in Kashmir since the August 5 clampdown.

Shibli, who was in Kashmir when the crackdown unfolded, gathered the following information, which includes specific details, over several weeks. He has put in the report only information he could corroborate with multiple sources, including officials and the relatives of some of those detained. Needless to say, given the situation in Kashmir, few were willing to be quoted on record. Several other names and alleged instances were omitted because of the lack of reliable confirmation.

Two weeks after the Darbar Move, a 150-year-old biannual tradition of shifting the main government work from summer capital Srinagar to the winter headquarters at Jammu, the bunch of demobilised unionist Kashmiri politicians incarcerated at the Centaur Lake View Hotel in Srinagar earned their own move.

But this transfer was without any darbar, bereft of the hoopla that would usually carry their caravans with vehicles and attendants — both official and party workers — amid a lot of ostentatious paraphernalia, all at the expense of the public purse.

With a controlled media, at Srinagar and elsewhere in the country, the relocation was artfully disguised as a progression for the benefit of the detainees, for, according to the news reports, all attributed to official sources, there were inadequate arrangements to deal with the rising cold.

This is simply not true. The Centaur Hotel is a four-star hotel with central heating that had been running smoothly in the past but suddenly became insufficient.

The transfer of the detainees — who include former ministers, legislators and bureaucrats who had benefited from New Delhi’s largesse for controlling and managing Kashmiri aspirations under the misleading rubric of “mainstream politics” — is a terrible demotion.

This is a ploy at their further denigration to wear them down psychologically. In the words of a family member of a detainee, this action was undertaken to “show them their place in the new arrangement”.

The new detention place is a part of the MLA Hostel that contains one-room or studio flats with little or no arrangement for heating. According to information this writer received, there was no heating arrangement on the first night and the inmates, already shaken by the rough treatment during their transfer, quaked for the night. Next morning, they were each provided with a single-rod electric room heater that could barely warm one’s hands, that too when close.

The detention space has been fortified with large corrugated sheets of steel, making the small park at the hostel out of bounds for the inmates.

The entrances and the windows have been boarded up with chipboard and the remainder of the glass panes covered with a dark film to control the ingress of any natural light to a minimum in addition to blocking any outside view. This will create a ghoulish milieu for those cooped in.

Also, unlike the Centaur Hotel, the new place will face the frequent power cuts that are normal in Kashmir during winter, leaving the much-touted heating facilities practically useless.

For almost all the detainees, this would be their first-ever experience of prison-like conditions and, according to the official thinking that has guided the move, will soften them into submission.

All of them are now free except for the Mirwaiz, who has earned a reprieve from the NIA-led inquiries into his impressive portfolio of wealth and assets, allegedly accumulated without any known source of income.

The detention of over 100 days at the Centaur Hotel was not easy, either, as the politicians were deprived of their pampered lifestyles. After the initial shock of the loss of position and prestige, when some of them tried to create a sort of a routine they faced obstacles from the very police force that once danced to their tunes.

No one was allowed to go outside into the sprawling lawns. When the inmates finally settled for the hotel corridor to avail a walk, they would often be stopped by the cops or unidentified men in mufti.

In one instance, when Sajjad Ghani Lone was taking a stroll, a non-Kashmiri person looped an arm over his shoulder, unsettling him in the process. Lone stopped waywardly but was ordered to continue walking, carrying along the man who also asked for his introduction, yelling, “Tu kaun hey?”

This was rendered in an unflatteringly harsh tone, making sure everyone else around heard, so as to dismantle any pride left in Lone. The man then reportedly roared that it was he who had made Chowdhury Zulfikar Ali a minister in Mehbooba Mufti’s previous government.

Earlier, Lone had managed to sweet-talk an on-duty police officer and use his phone to call a person who was purportedly Amit Shah. A call that lasted a couple of minutes saw “Lone pleading like a baby” and reminding the listener of his and his family’s sacrifices for “the country and the BJP in the state”.

The receiver of the call apparently promised to talk to him again. But soon afterwards, the police chief was informed of the call and an investigation was ordered. The on-duty police officer was immediately suspended and the anecdotal information that has reached the outside world suggests that pressure was increased on Lone to completely cower him into submission.

Omar Abdullah and his father Farooq have shown the least or no resistance, with the senior Abdullah responding to the loss of his political standing with unsettling signs. “He often laughs without a reason and has little appreciation of the situation,” said a source close to his family.

However, former chief minister Mehbooba Mufti grew agitated and, at one time, was locked in a fight with a lady police constable. One of her estranged family members in New Delhi told this writer that she had turned into a psychological wreck, and one day when she looked herself in the mirror, she was mortified and this resulted in the fight.

She was calmed down but not before receiving a few slaps on face and head from the lady constable, and, later, a lot of abuse from a senior police officer who had been given an extension before the amendments to Article 370. The situation stabilised after some basic make-up facilities were restored.

Mehbooba’s devaluation from a sprawling Chashma Shahi guesthouse to a nondescript government building that had been ravaged by the 2014 floods followed her daughter Iltija’s Twitterstorm over her mother’s poor health.

The pressures of life inside the Centaur had already unsettled many former legislators. After a week into his detention, National Conference MLC Showkat Hussain Ganai started criticising his party’s founder, Sheikh Muhammad Abdullah, for what he termed “the serfdom of Kashmiris”. When he couldn’t control his acidic gob, another NC leader beat him up.

Naeem Akhtar, former minister of education in the PDP, won heaps of rebuke for his unwarranted interventions. The vocal among the lot -– Bashir Veeri, Nizam-ud-Din Bhat and Shah Faesal -– were bitten by rats they believe were deliberately let loose in their rooms as a sort of punishment.

Most of the detained politicians were seized during raids on the night between August 4 and 5. The operation was led by the Special Operations Group of the Jammu and Kashmir police, a force officially raised to fight terrorism.

Before being taken to the Centaur, they were kept in various police lines or attached government properties, closed from the public view with no contact with the outside world.

Some of them, like Sartaj Madni, a former minister and uncle of Mehbooba Mufti, and Altaf Kaloo, former MLC, were reportedly roughed up in the initial days before being shifted to Srinagar. Madni kept complaining for several days, not stopping to mention he had been a former minister. But more than three months into his detention he has mellowed down.

The new place is supposed to bring everyone else to order and wring out every possible trace of rebellion from their hearts and minds, and turn them into dependable assets, if not reliable partners.

The Telegraph published an article today regarding the current situation of political detainees in Kashmir. Your correspondent claims that my mother Ms Mehbooba Mufti has been manhandled by lady police constables and is a ‘psychological wreck. He then goes on to write that in the course of an altercation, she was repeatedly slapped in the face and head. I have to admit that since her incarceration I heard all kinds of bizarre rumours but this surely is the most absurd one. The sense of disappointment one feels is compounded by the fact that this has been printed by a credible independent newspaper like The Telegraph whose recent coverage vis a vis Kashmir has been outstanding & based on ground realities.

Such cheap sensationalism stories certainly don’t behove a newspaper of your reputation that has stood up to the establishment & reported the truth.

I’m sure you will agree that Journalism certainly isn’t concocting nonsense and attributing it to ‘sources’. That’s Expected of Indian Rwanda TV and other pliable newspapers. Not the Telegraph.

In the course of these three months I have spoken up constantly about the manner in which Kashmiris have been brutalised. I also speak as an anguished daughter and find it quite odd that your correspondent didn’t bother double checking the lies that he eventually passed off as ‘the truth’. The intention to malign Ms Mufti's reputation is painfully obvious. I hope in the future you are more responsible about your reportage. Meanwhile, I recommend the gentleman in question sticks to writing fiction novels.