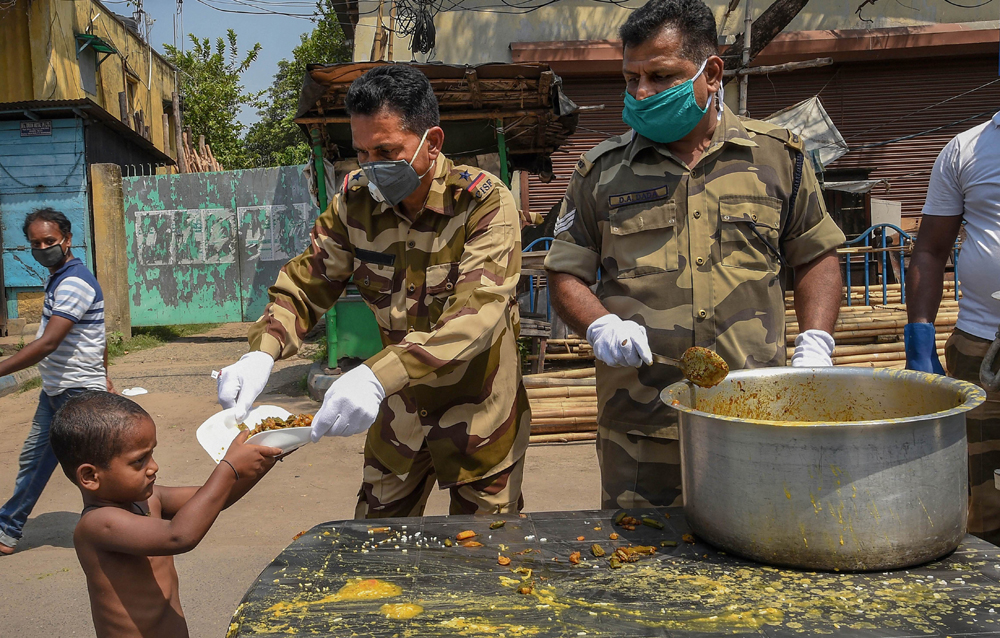 A CISF jawan hands over a food-plate to a child while distributing food among needy and poor people during the nationwide lockdown imposed to curb the spread of novel coronavirus, in Calcutta, Sunday, April 19, 2020.
(PTI)
Sanjay K. Jha   |   New Delhi   |   Published 20.04.20, 09:13 PM

The Congress on Monday painted an alarming picture of hunger, arguing that the poor wouldn’t be able to survive till future strategies are worked out and said the transfer of Rs 7,500 each to their accounts was an unavoidable necessity.

This sense of emergency emerged at the first meeting of the party’s consultative group, headed by former Prime Minister Manmohan Singh, which felt that protection of the most vulnerable sections of the society should be the topmost priority.

The meeting also decided to prepare reports on micro, small and medium enterprises and procurement from farmers. The reports will be submitted to the Narendra Modi government.

“What can be done in the future will become immaterial,” party spokesperson Jairam Ramesh said after the meeting. “Millions of poor are in acute distress and won’t be able to survive for future strategies. It is a question of sustenance tomorrow and day after. Immediate relief is absolutely essential.”

Ramesh said: “As the first step, Rs 7,500 (should) be transferred to every Jan Dhan account. Then, under the rural development ministry, there are three kinds of pensioners — widows, disabled and senior citizens. Rs 7,500 (should) be transferred to their accounts as well. The third category is farmers. Under the PM Kisan scheme, Rs 2,000 is being given. That is not enough. They should also be given Rs 7,500 each. This will largely cover the rural population and the urban poor.”

The Congress, which has repeatedly made this demand, says the question of the survival of the poor has become unbearably grim.

Ramesh added: “In addition to the money, every ration card holder, per person, 10kg of wheat or rice, 1kg daal and half kg sugar should also be given immediately.”

He said this was the responsibility of the Centre, irrespective of what the state governments were doing on their own.

Asked if the central government had the resources, given the state of the economy and fall in revenue collection, Ramesh said: “Resources are not a problem, the will is. Any sensitive and responsible government will find resources. It is not a question of whether the government can, it must. These are not Congress demands; this is not a partisan issue. It is about justice and people’s rights. The Congress is only extending a helping hand to the government by giving constructive suggestions. We hope the government comes down from the high pedestal and responds.”

Ramesh insisted that this was not the time to play politics. “Even at today’s meeting, both Rahul Gandhi and Manmohan Singh said suggestions should be given to the government with a constructive approach and cooperation between the ruling and Opposition parties at this critical juncture was necessary. People’s livelihoods have been destroyed, apart from the unprecedented health crisis, and everybody should join hands to support the needy,” he said.

Ramesh admitted they had issues with the government’s performance but those would be raised at the right time. “The government was sleeping. It had the information in January, it did nothing in February, the issue was not taken seriously till March-end till the Madhya Pradesh government was pulled down,” he said.

“There was doubtless a delayed response from the government, followed by several irresponsible acts and inadequate measures. These are facts, valid criticism. But our leaders don’t want to get engaged in a slanging match at this stage.”

While Monday’s meeting did not discuss the overall economic scenario and the revival strategy, the specific problem of micro, small and medium enterprises was on the agenda.

Everybody felt that the MSMEs, which account for the greatest number of jobs after agriculture, would be devastated and a financial package to save this sector was unavoidable. A detailed report on what needs to be done is being prepared and it will be submitted to the government within the next two days.

The meeting also discussed the ongoing procurement of wheat, sarso and chana, apart from crop damages caused by recent rainfall. A report on how smooth procurement can be done during the lockdown will also be submitted to the government either tomorrow, or the day after.

The Congress, which has the unique experience of ruling this country for decades, has not been asked for suggestions by the Modi government but party leaders feel it is their duty to guide the government in this time of crisis.