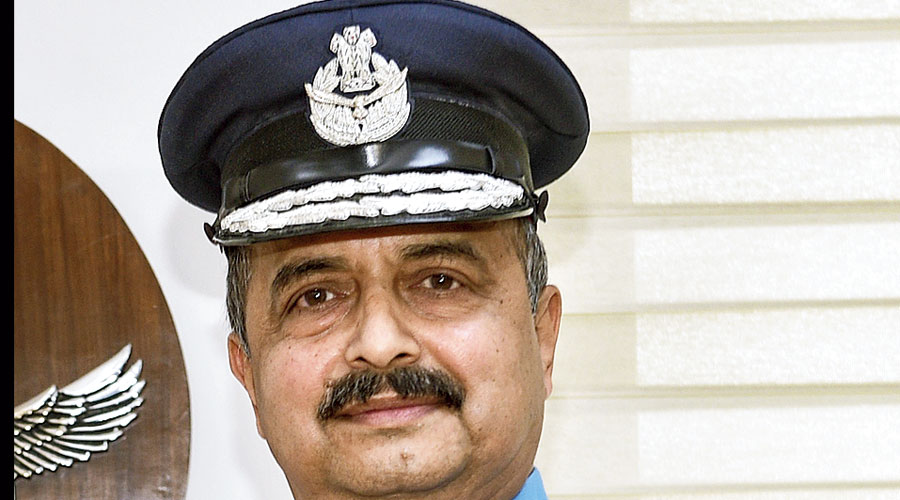 The IAF's prompt actions in response to developments in eastern Ladakh last year were a testament to its combat readiness and its ongoing capability enhancement programme is aimed at achieving desired results "swiftly and decisively" across domains, Chief of Air Staff Air Chief Marshal V R Chaudhary said on Friday.

In an address on the occasion of the 89th Air Force Day, he also strongly called for upgrading the training modules for air warriors and asked senior officials to invest time and efforts in "nurturing and empowering" their subordinates and young officers and to consider it as their primary task.

Chief of Defence Staff Gen Bipin Rawat, Army Chief Gen MM Naravane and several top officials of the three services and the Defence Ministry were among those present at the event.

The IAF also carried out a spectacular air display showcasing its vintage aircraft and modern fleet on the occasion.

On the modernisation plans of the IAF, the chief of Air Staff pitched for "creative and skilful" employment of new-age capabilities through the development of unique tactics and "out-of-the-box" operational plans and training programmes to gain mastery over modern trends of aerial warfare.

"As our challenges continue to rise, so does our strength and resolve to ensure best possible application of air power. When I look at the security scenario that we face today, I am acutely conscious that I have assumed the command at a crucial time," he said at the Air Force Day parade held at the Hindon airbase on the outskirts of Delhi.

"We must demonstrate to the nation that external forces will not be allowed to violate our territory. I pledge to do all I can to provide you with clear direction, good leadership and the best of resources that I can muster," he said.

Air Chief Marshal Chaudhary said the year gone by was "quite challenging yet extremely rewarding".

"The prompt actions in response to developments in eastern Ladakh were a testament to the Indian Air Force's combat readiness. Our efforts in completing all Covid-related tasks was also a major achievement in support of national efforts," he said.

Following the escalation in tension in eastern Ladakh in mid-June last year, the IAF deployed almost all its frontline fighter jets like Sukhoi 30 MKI, Jaguar and Mirage 2000 aircraft as well as its attack helicopters in the key air bases in eastern Ladakh and elsewhere along the Line of Actual Control.

In his address, the chief of Air Staff particularly focused on the need to devote attention to human resources.

"It is my firm belief that when we continue to acquire the latest technologies, there is a much greater need to devote our attention to the people placed below us. As seniors, invest your time and efforts in nurturing and empowering your subordinates. I am confident that each one of you will treat this important task as your primary responsibility," he said.

The IAF chief said that though the "targeted training programmes" are helping air warriors to develop the aptitude for mustering the modern trends of aerial warfare, acquiring the "right attitude" is equally important.

"Our focus on grooming and mentoring them (young officials/air warriors) as leaders for shouldering tasks should be sustained," he said.

"I am of the view that while we are actively pursuing self-reliance in hardware, innovative thought has historically been our core strength and I look forward to creative and skilful employment of these capabilities through the development of our own unique tactics and out of the box operational plans," he said.

On the tri-services integration, Air Chief Marshal Chaudhary said the IAF remains steadfast in its view that integrated jointness is the way ahead.

"It is also our belief that the core competence of each service, indeed of all organs of national power must be synergised to generate desired effect and capability. Here I wish to assure the nation of our unwavering commitment towards delivering joint capability and generating integrated response options as a part of a coherent national strategy," he said.

The chief of Air Staff said the security environment in the region and beyond has been "impacted by a complex interplay of geopolitical forces".

"Moreover, the advent of new domains over and above the traditional domains of land, sea and air has resulted in a paradigm shift in the way military operations will be conducted," he said.

"In sync with the changing nature of war fighting, the ongoing capability enhancement in the IAF is aimed at providing the optimum means for employing air power and achieving desired effects across domains swiftly and decisively," the IAF chief said.

"Remember that it is our sacred duty to protect the nation's sovereignty and integrity at any cost and you are to do what it takes to ensure that we do not let the nation down," he said.

The chief of Air Staff said the IAF stands today on the threshold of an era that will define its stature as a "potent strategic aerospace power".

"The need of the hour is to reassess and realign with emerging trends in order to gain from ongoing efforts towards greater self-reliance in high-tech items," he said.

"I am happy to report that several projects are well underway for harnessing the potential of automation, data analytics and artificial intelligence in order to transform the way we fight future wars," he said.

The IAF chief said young men and women who are joining the force are highly competent and aware of today's digital world.

"We have to upgrade our training methodology so that these air warriors are equipped with the right skills and knowledge for confident and audacious use in battle," he said.