A playlist and a message sum up visit 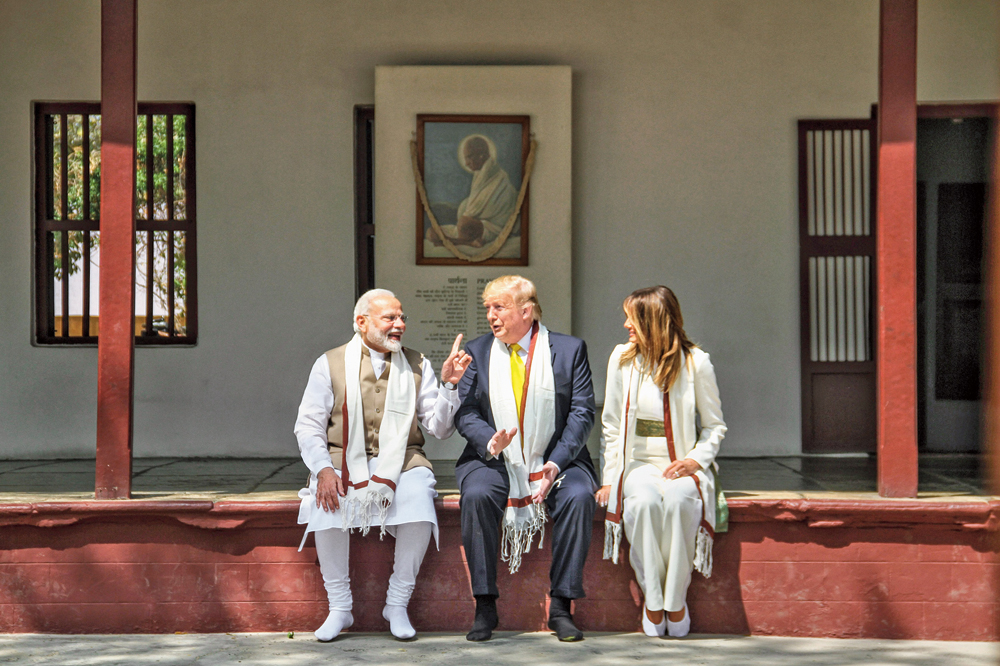 The millions were not there but the couple of lakhs promised by India were in attendance as US President Donald Trump swept into Ahmedabad on a hot and sunny Monday afternoon to address a rally that could have passed off as one of his campaign rallies going by the playlist that was belted out and the rest of the optics.

His delayed arrival at the Sardar Patel Stadium in Motera was announced with the blasting of the Village People number Macho Man on the public address system at a decibel level that literally rocked the world’s largest cricket ground.

The Americans present quickly recognised it for what it was — a regular feature of his playlist at campaign rallies.

The Namaste Trump event had all the trappings of a US campaign rally, except here there were two principals sharing the stage. But there was enough custom-made merchandise — caps with the two flags and the event logo, masks of both Modi and Trump, and table napkins with Namaste Trump embossed on them.

From the sound of it, nobody could be faulted for mistaking it to be a Trump political rally as Macho Man was not the only song from his campaign playlist that was played at the stadium.

Another staple, Elton John, featured twice: his Tiny Dancer and Rotten Peaches were played as the cavalcade moved from Sabarmati Ashram to the stadium and Trump left the event to the Rolling Stones number You Can’t Always Get What You Want — which is almost always the song with which he signs out of political rallies back home. 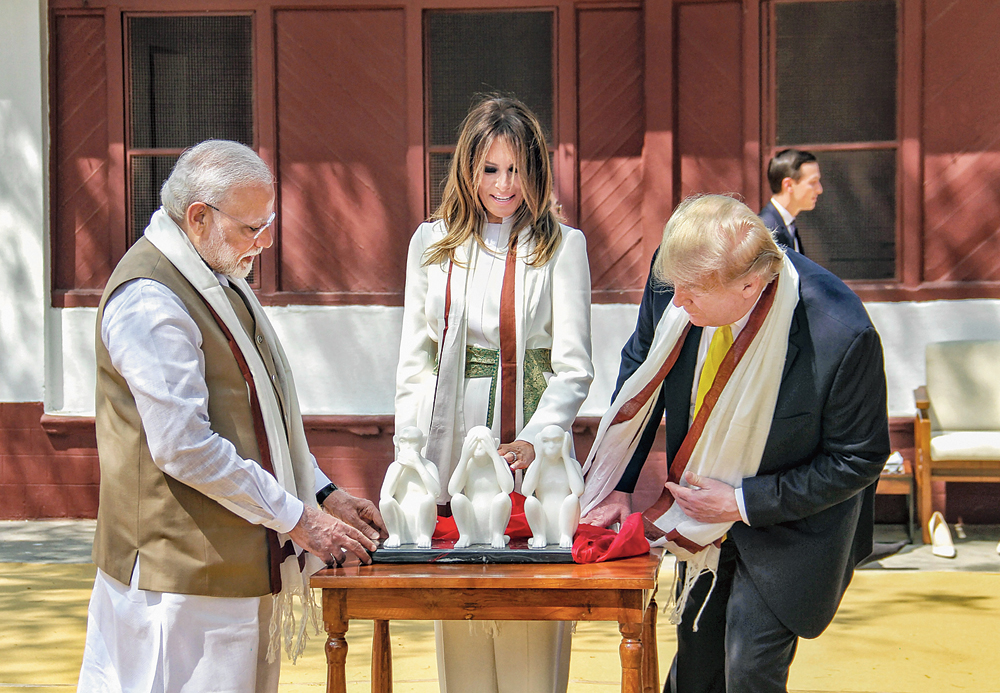 The music and the optics are likely to further fuel speculations that the Namaste Trump show doubled as a long-distance platform-of-sorts for the Trump campaign; more so with Prime Minister Narendra Modi's rich words of praise including the crucial certificate of the President having realised the American dream for the people of the U.S. The Howdy Modi event — which the President had attended along with Modi in Houston — had drawn criticism for providing a campaign pitch to Trump and risking the bipartisan support India enjoys on The Hill.

Both leaders — who can outdo each other in showmanship — were rich in showering praise on each other while talking up their own achievements and hugging at least four times on stage.

Trump uncharacteristically stuck to his scripted speech, possibly because of the language barrier. His speech was simultaneously translated in Hindu and run on the big screens flanking him, but the crowds sitting in the stalls that had no protection from the sun started walking out midway and continued to do so when Modi came to speak after Trump.

The crowds, which had been kept entertained during the long wait for Trump’s arrival with live performances by leading Gujarati singers, including Kirtidan Gadhvi, Kinjal Dave, Geeta Rabari and Kailash Kher, besides fast-paced recorded music, appeared to lose interest as the speeches began.

Trump paid back the compliment from the Prime Minister in the same coin by stating that the “life of PM Modi underscores the limitless promise of this great nation; he started out by his father’s side as a tea-wala”.

The President gestured to his “friend” to stand up for an applause. The crowd obliged. 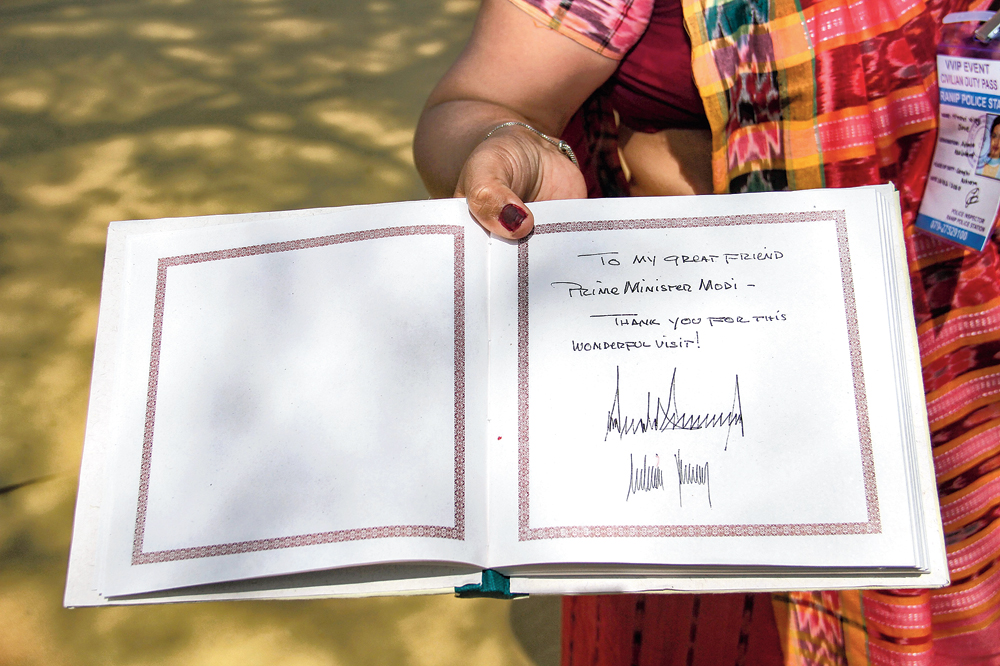 Speaking from behind the bullet proof glass but with the mid-day sun beating down, Trump said: “Prime Minister Modi, you are not just the pride of Gujarat. You are living proof that with hard work and devotion, Indians can accomplish anything… anything they want.”

Trump acknowledged the role of four million Indian-Americans, stressing the fact that one in every four Indian-Americans trace their roots right here in Gujarat, offering a clue to the temptation that may have lured him to India in the middle of his re-run campaign.

While the crowd at Motera was all that it promised to be, the millions that Trump has repeatedly said would show up en route the stadium did not quite add up. But still people lined all along since morning in a public display of welcome.

Billed the India Road Show, it was like a static version of the Republic Day tableaux with each state having a small stage to display the cultural diversity of India, only in this case the chief guest was driving past at a pace that proved to be a tad disappointing for those who had put in considerable effort to put up the mini-shows.

The Trumps’ first stop-over in Ahmedabad was at Sabarmati Ashram where they visited Hriday Kunj — Mahatma Gandhi’s dwelling unit from 1918-30 — with the President trying his hand at the spinning wheel with some difficulty in not just turning it but also sitting on the floor.

Since Modi’s preferred photo-op moment of sitting by the riverfront was not possible because of time constraints, they made up for it by sitting on the courtyard of Gandhi’s house for a photo shoot.

The President’s message in the visitor’s book at the Ashram held a mirror to what the visit was all about — two men and their brand of politics that has changed the democracies in both their countries.

For, the message had not one word of tribute for Mahatma Gandhi or even a mention of the Father of the Nation. All it said was: “To my great friend Prime Minister Modi, thank you for this wonderful visit -– Donald Trump/Melania Trump.”