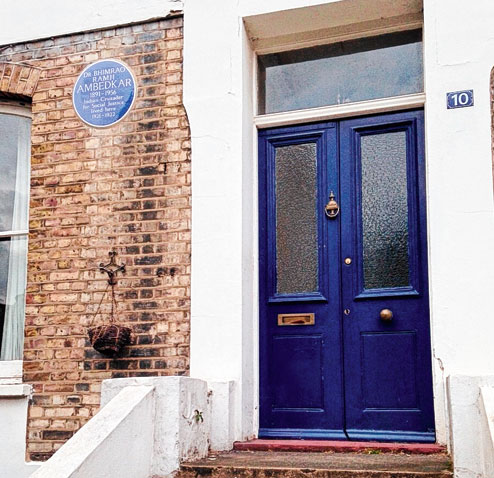 The London bungalow where Ambedkar used to stay. Picture by Kalpana Saroj

Nagpur, Feb. 15: The Maharashtra government is buying a London bungalow where B.R. Ambedkar, the architect of the Constitution, stayed for two years in the early 1920s while doing doctoral research at the London School of Economics.

This has averted the proposed auction of the 10 King Henry's Road, London, NW3 house by its present owner, about whom details are not immediately known. The bungalow roughly costs £3.1 million (Rs 30 crore), 10 per cent of which has been paid in advance to stall the auction.

The Devendra Fadnavis government has completed all formalities and appointed a solicitor to initiate the process of buying the house. B.R. Ambedkar stayed there as a paying guest in 1921-22 before returning to India with a PhD in economics and a degree in law.

The three-storey, 2,050sqft property was listed with Goldschmidt & Howland for auction, when the London-based Federation of Ambedkarites and Buddhist Organisations (FABO) alerted Indian authorities and lobbied with the government of Maharashtra - where B.R. Ambedkar's family originally came from - to buy it.

In its letter of intent sent to authorities in London in January, the state government said the house was of 'cultural and national importance and pride of millions of people of India'. It has agreed to fund the purchase of the house, believed to have six bedrooms, full with repairs and legal fees.

'Whenever I am in London, I visit this bungalow to pay my tributes to Dr Ambedkar,' Kalpana Saroj, a Dalit entrepreneur and a member of the Dalit Industrial Chamber of Commerce, told The Telegraph.

The Mumbai-based businesswoman saw the auction notice displayed outside the property last September on a visit to London. 'Our first reaction was to raise the money ourselves through collection, but there was no time since the auction process had already been initiated. None of us had that much money either,' she said.

The other option was to try nudging the government, she added.

So Saroj and other FABO members lobbied with the then Democratic Front government in Maharashtra, which responded positively. But it could not initiate the buying process as Assembly poll dates had already been announced.

Once the new government took charge, the FABO wrote to the chief minister and also knocked on the doors of the PMO, Saroj said. The FABO had, meanwhile, managed to convince the owner to postpone the auction by a few months.

The deal finally materialised last month when Maharashtra education minister Vinod Tawde went to London on an official visit and met FABO activists and the Indian ambassador. He confirmed the government's decision to buy the property.

B.R. Ambedkar first went to the US in 1913 to do an MA and PhD from Columbia University on a modest scholarship. He was the first person from the Dalit community to study abroad. He researched the administration and finance model of the East India Company.

In 1916, he went to London and enrolled at the LSE for a doctoral thesis and simultaneously at the Gray's Inn for the Bar course. The same year, he completed his MA dissertation, entitled 'National Dividend of India --- A Historic and Analytical Study'.

In 1917, he had to return to India midway through his course after his scholarship ran out. 'But he was excused for interruption of his study on the condition that he would return within four years to finish the course,' Pradeep Aglave, the head of Nagpur University's Chair of Ambedkar Thoughts, said.

'He returned to India, took up a professorship in Mumbai, saved from his earnings and went back to London in July 1920 to finish his studies. That's when he stayed in this bungalow.'

B.R. Ambedkar's doctoral research at the LSE was on the problem of the Indian rupee. He finished his thesis and the Bar degree in two years when students generally take six to finish the courses, Aglave said.

'His professors and batch-mates would always find him buried in books and studies. He had no time or money to fund his prolonged stay in London.'

Even today, a blue plaque hangs at the entrance of the house: 'Dr Bhimrao Ramji Ambedkar, an Indian crusader for social justice, lived here 1921-22'.

The Maharashtra government has not yet decided what to do with the bungalow --- turn it into a museum or a hostel for Dalit students who go to London for higher education. 'We will take a call later,' social justice minister Rajkumar Badole said.