Have not done anything wrong, says Mohammed Zubair

'Even if I tone down my tweets, they will arrest me if they want to so I shall continue to do what I have been doing' 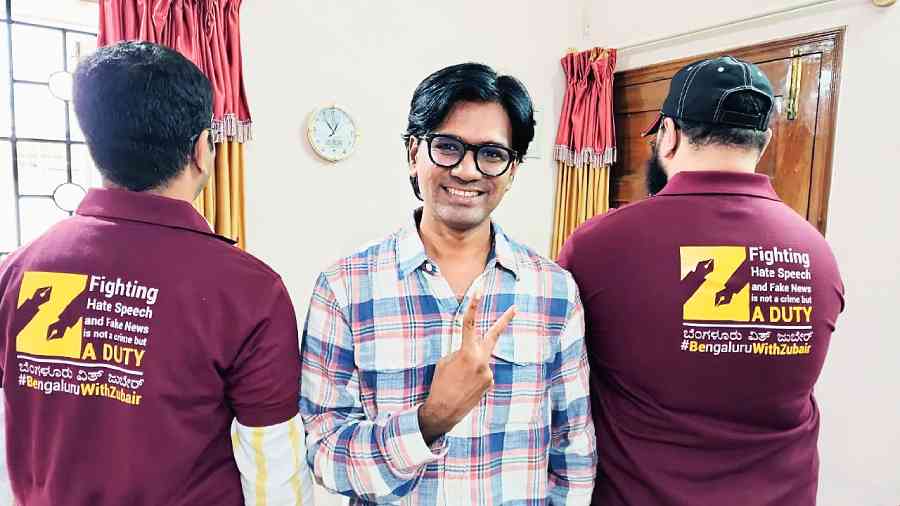 Mohammed Zubair with friends who have designed a T-shirt to express their solidarity with him
Sourced by The Telegraph
K.M. Rakesh   |   Bangalore   |   Published 28.07.22, 02:56 AM

Fact-checker Mohammed Zubair, freed last week after 23 days in custody over tweets that allegedly hurt Hindu sentiments, does not plan to stop what he has been doing.

Zubair believes he did no wrong and needs to fear nothing since all he wants is to expose lies and call out hate mongers.

“I will not stop what I am doing and I haven’t done anything wrong,” the 40-year-old co-founder of the AltNews fact-checking website told The Telegraph.

“Even if I tone down my tweets, they will arrest me if they want to. So I shall continue to do what I have been doing and keep calling out hate speeches and lies.”

Zubair, arrested by Delhi police on June 27 over a 2018 tweet and later enmeshed in FIR after FIR in BJP-ruled Uttar Pradesh, received across-the-board interim bail from the Supreme Court on July 20 and was freed the same night. The apex court granted him protection from arrest in any future case on the “same subject matter” and refused to restrain him from posting tweets.

Zubair said the only reason he has not posted tweets since his release is that his mobile phone remains in police custody.

“We have moved court seeking permission to apply for a SIM card. Once the court permits me, I shall get my SIM card and start tweeting.”

Zubair has a reason for not using mobiles belonging to family members or friends. “I don’t want to log into my social media accounts from others’ phones since they will be tracked. So I’d rather wait to get my own phone to resume work.”

Zubair remembers being woken up at 2am in his Tihar Jail cell multiple times to be taken to Sitapur and Hathras in Uttar Pradesh, where cases had been registered against him, to help with the investigation and be produced before local courts.

“They would show up at 2am at my cell and ask me to get ready in two minutes.

Then on, it’d be a ride in a closed chamber in a police bus enduring all the summer heat, which was too much for a Bangalorean used to cooler climes.”

The 2am wake-up calls affected his sleep and put him under mental stress. “Then on, I always had this at the back of my mind. So my sleep was very disturbed.”

But apart from the mental stress, Zubair said the jail authorities and police had taken good care of him, and he was not beaten or tortured.

“The sevadars (inmates assigned to help other inmates) in the jail told me they were under orders to make me comfortable. They often asked me if I wanted books or newspapers or wanted to watch television. Perhaps the jail authorities were worried that I would write about what was happening there once I was out on bail,” Zubair said with a chuckle.

“Some of my cellmates told me even they were being treated better since my arrival. The regular food was not good; so they (jail authorities) got food from a langar (of a gurdwara) which was of much better quality.”

Zubair had been locked up in a cell with three others accused of financial crimes but came across many others, including some Kashmiris critical of the abrogation of Article 370 provisions and alleged accomplices of Olympic medallist wrestler Sushil Kumar who had been accused in a murder case.

“Many of the inmates had quite a negative impression about me since they had been fed by the media that portrayed me as insulting Hindu gods. But I managed to clear the air and they easily understood me,” Zubair said.

While Zubair’s family was traumatised after his arrest, regular updates from his colleagues and lawyers kept them abreast of the strategy to get him out on bail.

“The extended family, friends and neighbours in Bangalore pitched in to provide some relief to my family. Not many of my neighbours knew what I did for a living until my arrest. But that didn’t stop them from comforting my family.”

But Zubair tried to limit the exposure his family members, especially his parents and two school-going sons, had to the proceedings.

“Before I was taken to my apartment to retrieve my laptop and mobile phone, I told my lawyer to ensure my parents and sons were not there. Only my wife, our three-month-old daughter and my brother were in the apartment when I was taken there.”

The June 24 email from the Delhi police that summoned Zubair to appear on June 27 did not mention the 2018 tweet over which he was later arrested.

Zubair was not alarmed, for he thought he had been summoned in a case over a 2020 tweet in which the police had already given him a clean chit.

In 2020, the Delhi police cyber cell and Raipur police had registered separate cases against Zubair, based on a complaint from the National Commission for the Protection of Child Rights. He was booked under the Information Technology Act and Protection of Children from Sexual Offences Act for allegedly “harassing and torturing” a minor.

Zubair had on August 6, 2020, while responding to a Twitter user named Jagdish Singh who had abused him on the micro-blogging site, shared Singh’s display picture after blurring his granddaughter’s image that it also featured.

Zubair had added the comment: “Hello Jagdish Singh. Does your cute granddaughter know about your part-time job of abusing people on social media? I suggest you to change your profile pic.”

Zubair told this newspaper that when he was summoned, “I was a bit concerned as they had already given me a clean chit in that 2020 case. So I wondered why they wanted me to appear again in the same case.

“Then I discussed this with my lawyers and colleagues. The lawyers advised me to honour the summons since ignoring it would mean I was not cooperating with the investigation.”

His lawyers and AltNews co-founder Pratik Sinha accompanied Zubair to Delhi. “I was by then quite certain they were planning to file an FIR,” he said.

“But after asking a few questions on the 2020 case, they said I had already been given a clean chit. Yet they made me wait for about an hour. Another investigating officer then came to me and told me I could leave after answering a few questions in a different case and took me to a room. That was when they asked me about this ‘Honeymoon Hotel’ tweet.”

The 2018 tweet carried a screenshot from Kissi Se Na Kehna, a 1983 Hrishikesh Mukherjee film, that showed a hotel signboard being repainted from “Honeymoon Hotel” to “Hanuman Hotel”.

This was an allusion to the Narendra Modi government coming to power in 2014. He was accused of insulting Hanuman although the film had not provoked any complaints.

“I answered all their questions before they left the room. They returned later and said I was not cooperating although I tried to tell them that I did cooperate,” Zubair said.

The subsequent interrogations by the Delhi and Uttar Pradesh police were mostly about AltNews and its funding pattern.

“Most of the questions were not about my tweets. They wanted to know if we were getting overseas funding. So they contacted Razorpay (a digital payment solution) and got details of some Rs 46 lakh received in the form of donations during four months,” Zubair said.

When Zubair was taken to Sitapur and Hathras, “even they wanted to know who our donors were and if we are directly or indirectly receiving support from any political party. Only a few questions were asked about my tweets.”