The demonstrators were booked under sections of the Epidemic Act, Disaster Management Act and the Indian Penal Code, collectively punishable with up to 18 months in jail 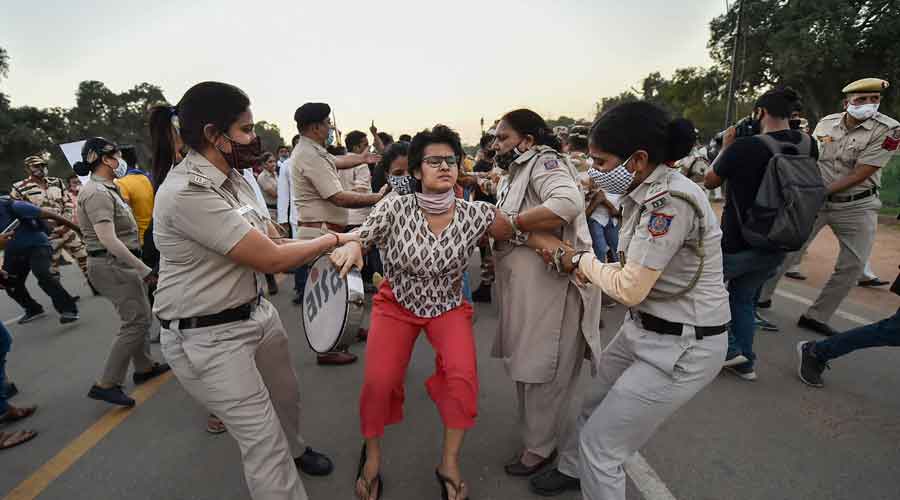 Police detained 80 people from Opposition-affiliated student, youth and women’s groups in the capital on Wednesday when they tried to protest outside Uttar Pradesh Bhavan against the gang rape and murder of a teenager in Hathras and her cremation by cops without her family’s participation.

The protesters were later allowed to leave but not before they had been booked under sections of the Epidemic Act, Disaster Management Act and the Indian Penal Code, collectively punishable with up to 18 months in jail.

Protests began on Tuesday outside Safdarjung Hospital after the brutalised Dalit girl breathed her last there. Later at night, JNU students blocked Baba Gangnath Marg outside the university and held a candlelight vigil. On Wednesday, the police and central forces picked up protesters as soon as they came near Uttar Pradesh Bhavan that had been barricaded, and whisked them away to police stations.

“Low conviction rates, dysfunctional fast-track courts, namesake rehabilitation and inaction on errant policemen have led to the sense of impunity among perpetrators. The UP government is yet to act against errant senior officials indicted in the Unnao case. The message of the government is that they don’t take rapes seriously,” Dhawale told The Telegraph.

Protesters who were let off later gathered at India Gate where they raised slogans in the evening before being detained again.

Kumar said in a statement sent from the police bus: “We have been taken into detention with inhuman violence and harassment of women comrades. We are in a bus right now and do not know where the police are taking us. Many women were detained after 6pm and many people were injured. We demand immediate speedy trial in the rape case of the Dalit woman in Hathras. The case must be fast-tracked and justice ensured to the victim.”

He added: “UP has become the national capital for violence against women and Dalits. The landlord Thakurs are dominating the state machinery with the hate politics of Hindutva garbing it. Our battle for the victim of Hathras symbolises our battle against the BJP’s upper caste hate politics.”

Leaders and elected representatives of Delhi’s ruling AAP are expected to protest at Jantar Mantar on Thursday.

On Tuesday, AAP legislators had been roughed up by the police and unidentified men at Safdarjung Hospital when they had enquired about the girl’s body.

Delhi minister Rajendra Pal Gautam said: “We all know that yesterday midnight UP police denied the body of the survivor to her family. The police cremated the body without the permission of the family. We demand that an FIR be filed against the local SHO, ACP, DCP and other police officers who manhandled AAP MLA Ajay Dutt. We also demand an independent probe into the gang rape and murder case by the CBI.”

He added: “The AAP demands speedy trial in the case and the filing of the chargesheet within two months. Thereafter the case must be heard in a fast-track court. We also demand that the UP government give Rs 2 crore to the (girl’s) family and a government job to a family member. We demand that the case be decided in a time-bound manner, the chargesheet be filed in two months and also the case be fast-tracked. Lastly, the AAP demands protection to the family members.”

Delhi Pradesh Mahila Congress president Amrita Dhawan, who was detained outside Uttar Pradesh Bhavan on Wednesday afternoon, told reporters: “The Arvind Kejriwal government has spent only 5 per cent of the Nirbhaya Fund — only Rs 19 crore out of the total allocation of Rs 390 crore — set up to ensure the safety and security of women, which clearly points to its non-seriousness about women’s safety. They have not spent a rupee from the Rs 50 lakh for the women’s helpline, though Kejriwal and his backers BJP and RSS had held a big agitation over the (2012 Delhi bus rape and murder) case.”

The Congress has complained to the National Human Rights Commission. Delhi Commission for Women chairperson Swati Maliwal has written to all judges of the Supreme Court demanding a court-monitored probe and immediate suspension of officers for trying to “cover up” the case.